This week let’s learn about a close relative, the gorilla!

But first, if you don’t already listen to these fantastic animal podcasts, definitely check them out! 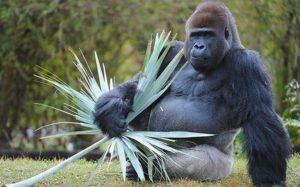 This gorilla has some lettuce. It looks pretty good: 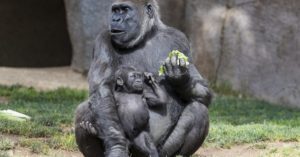 Some mountain gorillas with awesome hair: 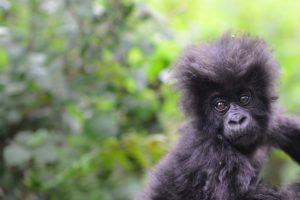 This week we’re going to learn about gorillas, mostly because I just found out they sometimes hum happily while they eat. And yes, I have audio of happy munching gorillas that will make you want to snack too.

But first, did you notice what happened last week? If you subscribe to several animal podcasts, you might have noticed that the first week of September 2018 suddenly turned into big cat week! A bunch of us animal podcasters thought it would be hilarious to release episodes covering the same topic in the same week.

Species covered snow leopards, All Creatures covered lions, Life Death & Taxonomy covered jaguars, Animals to the Max covered wildcats, Varmints covered tigers, Cool Facts about Animals covered mountain lions, and of course we had our mystery big cats episode. I’ll put links in the show notes to each podcast, but I recommend all of them. One thing I love is that all these podcasts can cover the same topic but approach it so differently that you’ll never get bored and think, Oh, I already know about this animal.

The gorilla is a great ape, closely related to chimpanzees, bonobos, humans, orangutans, and gibbons. There are two species, the eastern and the western, separated by the Congo River, and several subspecies. All gorillas live in Africa, but different species and subspecies live in different environments. Eastern gorillas prefer forests, including bamboo forests, but the mountain gorilla subspecies lives at a much higher elevation. Western gorillas live in swampy forests too. The western gorilla’s scientific name is Gorilla gorilla, and the scientific name of the western lowland gorilla subspecies is Gorilla gorilla gorilla. Don’t say you never learned anything from a podcast.

The gorilla is the largest primate alive today. They usually knuckle-walk, but can walk upright for short distances when they want to, usually when carrying something. Gorillas are vegetarian, although they will also eat insects. They have brown eyes and unique fingerprints like humans have. They also have black, brown, or grayish hair, and the western lowland gorilla also has a reddish forehead. Mountain gorillas have longer hair than lowland gorillas. They look awesome. Male gorillas develop silver hair on the back as they mature, which is why they’re usually called silverbacks. A silverback male acts as the leader of his group, making decisions and stopping other gorillas from arguing with each other. The silverback also plays with the children in his troop, even if they aren’t his offspring. If the group is attacked, the silverback will defend his troop to the death—in addition to his silver fur, silverbacks develop large canine teeth that can inflict massive wounds. But the gorilla is so big and strong, it doesn’t have many predators. Leopards will occasionally kill a gorilla if they catch one alone, but generally the only danger to gorillas comes from humans.

The gorilla is vulnerable to habitat loss, poaching, and human disease. More than 5,000 gorillas may have died due to the ebola virus outbreak in the 2000s, and gorillas can also suffer from malaria. But things are looking up for the gorilla, at least a little bit. The population of critically endangered mountain gorillas in the Virunga Volcanoes has doubled in only 25 years, finally climbing over 1,000 individuals, following some intensive conservation efforts.

In the 1990s, researchers estimated that there were only 50,000 western lowland gorillas alive. Then a survey of gorilla populations in the Republic of the Congo made an amazing discovery. In 2007, researchers discovered that there was an entire population of gorillas in the swamps and forests that they had never even known about—and not just a few gorillas, either. Estimates put the population at about 125,000. That doesn’t mean there’s nothing to worry about, of course. Gorillas are still endangered, but at least there are more of the western lowland gorilla than we thought.

The gorilla spends most of its time on the ground. Young gorillas will climb trees, but adults are usually too big and heavy and feel more comfortable on the ground unless they’re actually after a specific food. Just like humans—and in fact, a recent study found that the heel bones of our ancestor Australopithecus had more similarities with gorilla heel bones than with chimpanzee heel bones, even though humans and our ancestors are more closely related to chimps. The study gives researchers a better idea of how our ancestors got around.

At night, each gorilla builds a nest to sleep in from branches and leaves. These are on the ground, and since gorilla troops travel sometimes several miles every day to find food, they usually build a new nest every night. Sometimes they’ll build a nest to nap in during the day too. Babies nest with their mothers, but when a young gorilla is around three years old, it will start building its own nest near hers.

As young gorillas grow up, they usually move away from their home troop and join other troops, or in the case of males, they eventually start their own troops. The female chooses her mate, and usually has one baby every four years or so. Baby gorillas are even smaller than human babies, only about four pounds, or 1.8 kilograms. Babies cling to the mother’s fur and ride on her back when she’s walking.

Gorillas eat lots of different types of plant, especially fruit, tree bark, various roots and leaves, and the stems of some plants. An adult gorilla eats around 40 pounds of food a day, or 18 kg. And gorillas frequently sing and hum while eating, especially when a gorilla is eating a food it particularly enjoys. Researchers think that the singing is partly communication with others—sort of a dinner-time conversation—partly just to show their happiness with having food they like. This is what gorillas sound like while eating and humming. I don’t know about you, but this sounds totally appetizing. It sounds like they’re eating popcorn, but in fact it’s the leaves of the banana tree.

Like all great apes, gorillas are highly intelligent. They use tools, laugh, grieve their dead, have a complex system of communication, and even prepare food in ways that varies from region to region. A few captive gorillas have been taught to speak using a form of sign language, most famously Koko.

Koko was an amazing ape. She only died earlier this year, 2018, at the age of 46. She was a western lowland gorilla born in the San Francisco Zoo, and her proper name was Hanabiko, which means ‘fireworks child’ because she was born on the Fourth of July. She spent much of her life in a gorilla preserve in Woodside, California, and was purposefully exposed to spoken English from about age one. By the time she died, she could understand more than 2,000 words in English and knew over 1,000 signs.

Different studies of Koko and her use of language come to different conclusions. Some researchers claim she didn’t demonstrate any kind of grammar, while others claim her language use was extremely human. But everyone except utter curmudgeons agrees that Koko was actually using language to communicate. She even made up some signs when she needed a new word.

Koko also demonstrated a sense of humor, encouraged other gorillas when they attempted to sign, talked about her memories, recognized herself as the individual in a mirror, and even gave her pet kitten a name without being prompted. His name was All Ball, and when he later escaped her enclosure and was killed by a car, she cried. She had other pet cats later, all named by her, including Lipstick, Smoky, Miss Black, and Miss Grey. I’m just saying, Lipstick is a great name for a cat. Koko was reportedly gentle with her pets and when they were kittens, she treated them like baby gorillas.

Young gorillas play games like all young mammals do. Tag, for instance. Young gorillas, and sometimes even older ones, play tag. Researchers say that according to their observations, it appears that the rules of gorilla tag are pretty much the same as the human version of tag. Researchers do not report whether or not there was a big argument about who hit whom when they supposedly called a time-out to tie their shoe, probably because gorillas don’t wear shoes.