This week let’s learn about the pronghorn! 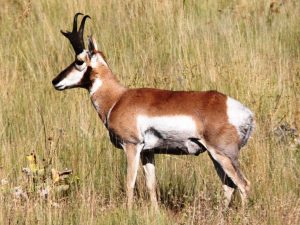 This week let’s finally look at an animal I’ve wanted to cover for at least a couple of years now, the pronghorn! We’ve talked about the pronghorn before a few times, but it definitely deserves its own episode.

The pronghorn is a cloven-hoofed mammal that lives in western North America, especially in open terrain where it can see any predators that might try to sneak up on it, because it has good eyesight. It stands up to about 3 ½ feet high at the shoulder, or 104 cm, and is tan or brown with black and white markings, including a black stripe down the top of the nose and a white rump and belly. Both males and females have horns, but the horns aren’t like bovid horns and they’re not like deer antlers. But they’re also not like giraffe ossicones either even though the pronghorn is most closely related to the giraffe.

Sure, the pronghorn looks like an antelope. It’s deer-like, runs extremely fast just like antelopes, and has short black horns. But look at those horns. It’s called a pronghorn because the horns of the males have a prong, or branch, so that the horn is shaped sort of like a Y, with the front branch of the Y shorter than the other, and the longer branch of the Y having a sort of hook at the top. Antelopes only ever have unbranched horns.

But the pronghorn also isn’t a deer. Its horns are horns, not antlers, and it keeps its horns throughout its life instead of shedding them every year. Except that it kind of does shed part of the horn every year, the sheath. The inside of a horn is bone that grows from the skull, but a sheath of keratin grows over it. If you’ve ever seen an old-fashioned drinking cup made of horn, it was made of a horn sheath, usually from a bull. Most horned animals keep the sheath their whole life, which grows as the horn grows underneath, but the pronghorn male sheds the sheath of his horns every year and then grows new ones.

There used to be more members of the pronghorn family, though, and some of them had really weird horns. Hayoceros was a pronghorn relative that went extinct around 300,000 years ago. It had horns that looked similar to the pronghorn’s, but it also had two more longer horns that grew behind them and pointed almost straight up with no branches. Ramoceros was much smaller than the pronghorn and had a pair of horns with several branching forks that looked a lot like antlers, although they were actual horns. Hexameryx lived around 5 million years ago and had six horns that probably looked like a pointy crown on its head, while Ilingoceros had spiral horns that were straight except at the ends, where they forked. And Stockoceros had two horns, but they divided into two at the base so from a distance it looked like it had four horns, each about the same length but sticking up like a pair of Vs. Stockoceros actually survived until only about 12,000 years ago. All these animals and others lived in North America, although obviously not all at the same time, and filled the same ecological niches that bovids fill in other parts of the world.

The pronghorn eats plants, including grass, cacti, and shrubs. It can even eat plants that contain toxins that would kill or sicken other animals. It’s a ruminant that chews its cud, which is also something the giraffe does too if you remember the tallest animals episode.

In winter the pronghorn lives in herds, but in spring the young males form smaller groups together while older males go off by themselves and find a territory to defend from other males. Females stay together in groups, moving around to find the best plants. In late spring babies are born, often twins, and after the babies are a few weeks old, the herd takes care of them as a group, although each mother will only nurse her own babies.

As the summer ends, some females start traveling around by themselves to find a male they like. When mating season approaches in the fall, females who haven’t yet found a mate watch fights between males and mate with the winners.

But I haven’t even talked about the most interesting thing about the pronghorn. It’s the second-fastest land animal alive, with only the cheetah able to run faster. The pronghorn can run 55 mph, or 88 km/h, for half a mile, or .8 km, but it can hit 60 mph, or 96 km/h, for short distances, and possibly faster. Its hooves are cloven but it doesn’t have dewclaws, and even though it can cover as much as 20 feet, or 6 m, with a single stride, it’s not much of a jumper. It usually goes under fences instead of over them, because when it does try to jump a fence it often gets stuck. Some ranchers have started removing the lowest strand of barbed wire from their fences to keep pronghorns from getting hurt. Back before people started fencing off grazing land, the pronghorn migrated long distances in the summer, but these days the migration is much shorter because so much of the land is fenced off.

At the speeds pronghorns reach, obviously they can easily outrun any predator in North America, including wolves. The wolf can only run up to about 38 mph, or 61 km/h, which is way slower than the pronghorn. So why can the pronghorn run so very fast?

It’s not because of predators alive today, it’s because of a predator that went extinct some 12,000 years ago. I’m quoting again from myself, this time from episode 34 about saber-toothed animals.

The American cheetah once lived on the prairies of North America. Its body plan resembled the modern cheetah’s and it was built for speed, but researchers aren’t sure if it was actually closely related to the modern cheetah or more closely related to the cougar. It was a little larger and heavier than a modern cheetah. Either way, the pronghorn evolved to outrun the American cheetah, and even though it no longer needs to run so fast, it still can. Because you never know when you might need to hit that turbo button and go zoom.