We’ve reached the big two-oh! Episode 20 catches us up on listener suggestions. 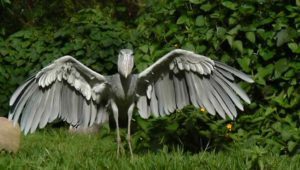 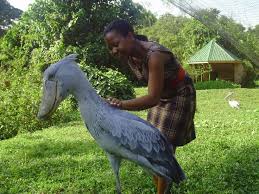 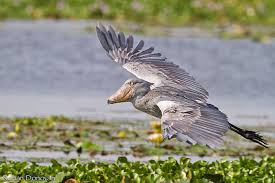 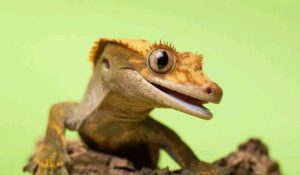 Alain Delcourt and stuffed giant gecko. I bet they both hate this picture: 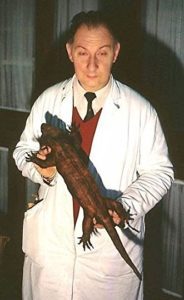 A page all about the shoebill

This week we have two more listener suggestions. The hosts of Crossover University suggested geckos as a topic because they have a leopard gecko named Lockheed, after the X-Men character, as their podcast mascot. The hosts of Barely Ready podcast want to hear about the shoe billed stork. I’m not sure if they have a pet shoebill as a mascot. Both are awesome fun pop culture podcasts. I’ll put links in the show notes so you can check them out.

The shoebill is commonly called the shoe-billed stork. Originally researchers thought it was related to storks, but DNA analysis shows that it’s actually more closely related to pelicans. I was going to go into details of the confusion about where the bird fits in the avian family tree, but basically it’s just two groups of scientists shouting back and forth, “Storks!” and “Pelicans!” Probably not that interesting to most people.

The shoebill is a big bird, four or even five feet high, mostly due to its long legs. Its wingspan can be almost nine feet. It lives in swampy areas in east central Africa and its toes are really long, which distributes its weight over a large surface so it can stand on floating vegetation without sinking even though it doesn’t have webs between its toes. Its feathers are slate gray and it has a little floofy tuft on the back of its head. But the most memorable part of its appearance is its bill. It’s a great big heavy bill with a hook on the end. It looks like the shoebill could kill crocodiles with that thing, and guess what?

Well, okay, not full-grown crocs, but it will eat baby crocodiles. It also eats lizards, snakes, frogs, small birds and mammals when it can catch them, and lots of fish. It especially likes lungfish and will dig in the mud with its bill to find them.

The shoebill has a reputation as kind of an idiot bird. It spends most of its time creeping up on its prey very, very slowly, but when it attacks, a lot of times it just throws itself at its prey like a maniac. Since the shoebill prefers to live in papyrus and reed swamps, it frequently ends up flailing around in the water, covered in rotten vegetation and mud, with a catfish or whatever swinging from its massive beak. But hey, it works for the shoebill.

The shoebill occasionally does something that is really rare in birds. It sometimes uses its wings to push itself upright after it lunges after prey. This may not sound unusual, but birds almost never use their wings like forelegs or arms.

The shoebill doesn’t like to fly very far, but it certainly can fly and it looks really impressive when it does. In fact, it’s possible that flying shoebills are responsible for the occasional report of living pterodactyls in Africa.

That brings us to the kongamato, a flying cryptid reported from east central Africa and generally identified by cryptozoologists as a type of living pterodactyl. Pterosaurs died out more than 60 million years ago, but that doesn’t stop people from seeing them from time to time. Most likely the sightings are misidentifications of known birds, especially big wading birds like the shoebill. When I was a kid I used to pretend great blue herons flying overhead were pterodactyls.

In 1923, Frank H. Melland published a book called In Witch-Bound Africa, a title that tells you a lot about Mr. Melland. Maybe his publisher made up the title. Anyway, according to Melland, the kongamato was a big reddish or black lizard with batlike wings and a long beak with teeth, which was supposed to overturn boats. The natives, Melland reported gravely, were terrified of it. When shown pictures of animals, he said local people always pointed at the pterodactyl and said it was the kongamato. It was supposed to live along rivers.

Sporadic reports of the kongamato, or at least of pterosaur-like animals, trickled into the press throughout the 1940s and 50s, but no photos have ever been taken and no remains found. Writer Dale Drinnon says that the kongamato was originally reported as a water monster. He suggests that a big stingray of some kind may be the boat-tipping culprit. Since all the information I can find online about the kongamato leads back to Melland’s 1923 book, I’m definitely skeptical about assigning any kind of possible identity to the animal. But I don’t think it’s a pterodactyl.

Shoebills don’t make a lot of noise ordinarily, but they do clatter their bills like pelicans_

Here’s what that sounds like, and then we’ll go on to learn about geckos.

Geckos are gorgeous lizards, ranging in size from about half an inch to over two feet long depending on species. They’re the lizards that can walk up walls and even across ceilings. For a long time scientists weren’t sure how the gecko stuck to surfaces, but recent studies show that most geckos’ toe pads are covered with tiny bristles that actually make the toes into adhesive devices. The gecko doesn’t even have to be alive for it to stick to surfaces. Dead geckos hang on just as securely. The gecko has to be alive to release its hold on the surface, though, helped by a fatty lubricant secreted by the toes that helps the gecko move its foot instead of it being stuck to one place for the rest of its life. Not all geckos have adhesive toe pads. It depends on the species.

Geckos are also the lizards that lick their eyeballs.

Some species can glide using flaps of skin that help keep them aloft when they jump from somewhere high up. Many gecko species have the ability to drop their tails when threatened. The tail detaches from the body and thrashes around while the now-tailless gecko beats feet to safety. The tail will usually grow back, but it’s just a little stumpy tail that can’t be lost a second time.

There is a type of gecko that can lose more than its tail if something tries to grab it. There are a number of fish-scaled geckos that can lose their scales, which are big. If an animal tries to bite a fish-scaled gecko, it’s likely to get a mouthful of scales while the gecko runs off. The scales grow back eventually and can be lost again. A newly-discovered variety of fish-scaled gecko is so good at dropping its scales and growing them back quickly that researchers have trouble catching them without ending up with a bunch of nude and irritated geckos.

There are more than 1,600 species of gecko throughout the warmer areas of the world and more are discovered all the time. There are so many that it’s easy to lose track of some of them. The crested gecko is a handsome little lizard, usually orangey or yellowish in color, with a broad head, tiny claws, and tiny spines that run along its shoulders and above its eyes. The spines above its eyes give it its other name, the eyelash gecko. It was discovered in 1866 in New Caledonia, a group of islands east of Australia, but after a few decades it appeared that the species had gone extinct. Then, in 1994, a German herpetologist out looking for specimens after a tropical storm found a single crested gecko. It turns out that the geckos had been just fine all along. Captive-bred crested geckos are now sold as pets.

Similarly, in 1877 a British naturalist in India discovered the Jeypore ground gecko under a rock. It’s a beautiful lizard, orangey or brown with chocolate brown blotches. But after that first sighting, no one saw the gecko again until a team went looking for it in 2010. They found it, too. Unfortunately, it’s not doing as well as the crested gecko. It’s only found in two small areas that together amount to barely eight square miles, and those areas are in danger of being destroyed due to development and mining. Conservationists are working to increase awareness of the gecko so hopefully its remaining habitat can be protected.

Most geckos are pretty small—no bigger than the length of your hand or thereabouts. But Delcourt’s giant gecko is a whole lot bigger, some two feet long. Unlike the other geckos I’ve talked about, Delcourt’s giant gecko really is extinct—at least, as far as we know. And until 1986, researchers didn’t know it had ever existed. In 1979 a herpetologist named Alain Delcourt, working in the Marseilles Natural History Museum in France, noticed a big taxidermied lizard in storage and wondered what it was. It wasn’t labeled and he didn’t recognize it, surprising since it was brown with red longitudinal stripes and the biggest gecko he’d ever seen. He sent photos to several reptile experts and they didn’t know what it was either. Finally the specimen was examined and in 1986 it was described as a new species.

No one knew anything about the stuffed specimen, including where it was caught. At first researchers thought it might be from New Caledonia since a lot of the museum’s other specimens were collected from the Pacific Islands. None of the specimens donated between 1833 and 1869 had any documentation, so it seemed probable the giant gecko was donated during that time and probably collected not long before.

Finally, researchers decided it was probably native to New Zealand. Not only does it resemble some smaller gecko species found there, the Maori people in New Zealand have local lore about a big lizard called the kawekaweau. The legends were known to Europeans as early as 1777 when Captain Cook interviewed the Maori and collected stories about the kawekaweau. In 1873 a Maori chief told a visiting biologist that he had killed a kawekaweau in 1870, and described it as “about two feet long and as thick as a man’s wrist; colour brown, striped longitudinally with dull red.” That was the last known sighting of the gecko and the last anyone in the scientific community thought about it until the stuffed specimen caught Delcourt’s attention.

I really like this story. It warms my skeptical cryptozoologist’s cold cold heart. Unlike accounts of the kongamato, it has everything a good cryptozoological mystery should have: the remains of an unknown animal, good scientific and historical work, and the support of a scientific hypothesis by local reports. The only way it could be a better story is if Delcourt’s giant gecko aka the kawekaweau was found alive and well in remote areas of New Zealand. It’s not likely, but there are a few reported sightings, so maybe one day a lucky herpetologist will make the discovery of a lifetime.

You can find Strange Animals Podcast online at strangeanimalspodcast.com. We’re on Twitter at strangebeasties and have a facebook page at facebook.com/strangeanimalspodcast. If you have questions, comments, or suggestions for future episodes, email us at strangeanimalspodcast@gmail.com. If you like the podcast and want to help us out, give us a rating and review on iTunes or whatever platform you listen on. We also have a PAYtreon if you’d like to support us that way. Rewards include exclusive twice-monthly episodes and stickers.