This week we return to the sea to learn about some marine reptiles, both living and extinct! 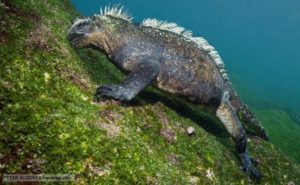 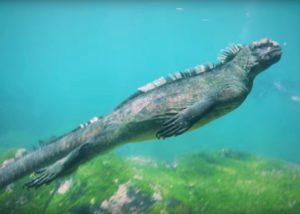 Maybe Darwin was right about the marine iguana looking like imps of darkness: 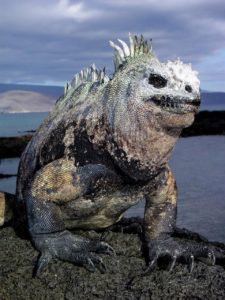 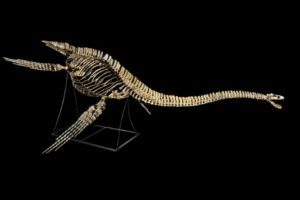 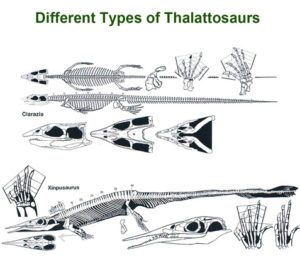 It’s been a while since we had an episode about the ocean, and I thought it would be interesting to learn about reptiles that evolved to live in a marine environment. Some marine reptiles we’ve already covered in previous episodes, including saltwater crocodiles, sea turtles, and sea snakes. But we haven’t talked much about extinct marine reptiles, and I don’t think we’ve ever had an episode about the marine iguana.

The marine iguana is only found on the Galapagos Islands. It eats seaweed and algae that grow in shallow water around the islands, so it swims and dives to find its food. It’s a large, strong iguana that can grow up to five feet long, or 1.5 meters, with short legs, a short snout, and a row of spines along its back. It’s black or gray in color, which absorbs heat from the sun and keeps the iguana warmer. Many have colorful markings, especially males during the breeding season. The markings might be red or pink, blue-green, yellow, or off-white, depending on subspecies. Some researchers think the kinds of algae eaten by the various subspecies of marine iguana also contributes to the colors of their markings. Males are larger than females.

The marine iguana is well adapted to swimming, although it’s not a fast swimmer. It uses its flattened tail and partially webbed toes to propel itself through the water, and the spines on its back keep it stable in the water. It has long claws that it uses to hold onto rocks to keep from being swept away. Newly hatched babies can swim immediately, but they stay out of the water whenever possible until they’re at least a year or two old. The water around the islands is cold, so the marine iguana will forage in the water for a short time, then come back on land to bask in the sun and warm up.

Only the biggest marine iguanas, mostly adult males, will dive for their food. Females and smaller males usually stay in shallow water, especially at low tide when the algae is easier to reach. A marine iguana can dive up to almost 100 feet, or 30 meters, and stay underwater for half an hour. During bad weather, the iguanas stay on shore, often gathered together to conserve body heat.

Researchers used to think the marine iguana evolved from land iguanas that were swept from Central or South America by storms and floated to the Galapagos islands on rafts of vegetation. Then genetic studies showed that the marine iguana started evolving separately from land iguanas around 8 to 10 million years ago. The Galapagos islands are of varying ages, formed by volcanic activity, but the oldest is only about 3.2 million years old. So obviously the two groups of iguana were separated long before the Galapagos formed. Researchers then speculated that there may have been other, older islands in the Galapagos or nearby that are now submerged, which were where the marine iguanas first started to evolve separately from land iguanas. Then new genetic studies indicated that marine and land iguanas actually separated about 4.5 million years ago, which is not that much of a difference from the oldest islands of the Galapagos, so researchers are back to the original hypothesis. As I’ve said before, science isn’t wrong or right, scientists learn new things and adapt their theories to account for the new information.

For instance, at the moment researchers aren’t sure how marine iguanas shrink during years when weather conditions keep them from finding as much food as they need. I don’t mean they lose weight, I mean they actually shrink. Results of a study published in the journal Nature say marine iguanas shrank up to 2.7 inches, or 6.8 cm, during years with El Nino weather patterns, which brings stormy weather. The iguanas’ bones actually shrunk, making them both shorter and smaller. Not only that, after weather patterns returned to normal and the iguanas were able to find more and better food, the shrinking reversed and they grew larger again. Shrinking reduces the iguanas’ dietary requirements, making them able to survive on less food without long-term health issues.

Because the marine iguana eats algae and other plants that grow in the ocean, it ingests a lot of salt. It has a special gland on the nose that filters excess salt from the blood, which the iguana then expels by sneezing. Many times marine iguanas look like they have white markings on the head, but in actuality it’s just dried salt that they’ve sneezed out.

Like most of the animals that live on the Galapagos Islands, the marine iguana is found nowhere else in the world. It would have been easy for early visitors to the islands to have eaten them to extinction the way they did so many other species. But sailors considered marine iguanas so ugly that they refused to eat them. Even Charles Darwin called them disgusting imps of darkness. That’s harsh, especially since I think they’re cute, but it kept them safe until people understood the need for conservation.

Many marine reptiles are extinct, including the ichthyosaurs we talked about in episode 63. These days the top predators in the ocean are sharks and whales, but mosasaurs and plesiosaurs used to fill those ecological niches.

Mosasaurs looked a lot like sharks in some ways, and like whales in other ways, but they were reptiles. There were a lot of them, from one barely more than three feet long, or 1 meter, up to some species that grew some 50 feet long or more, or up to 17 meters.

All species of mosasaur had four flippers, long powerful tails, and small heads with short necks. Its skull resembled a snake’s in that it was flexible, allowing the mosasaur to swallow prey larger than its head. It also had double-hinged jaws that could open extremely wide. It’s also possible that the mosasaur had a forked tongue. We have skin impressions of mosasaurs, so we know at least some species had finely scaled skins like snakes. Some species had fluked tails shaped like a shark’s tail. The mosasaur used its tail to propel itself through the water, with its flippers only helping it maneuver. Some researchers think the closest living relative of the mosasaur is the Komodo dragon and other monitor lizards, but others think the mosasaur was more closely related to snakes.

The mosasaur came to the surface to breathe every so often like other marine reptiles. It also gave birth to live young. It probably swallowed its prey whole, although some species had specialized teeth that allowed them to crush mollusk shells, such as ammonites. Some studies suggest the mosasaur may even have been warm-blooded. It went extinct at the same time as the dinosaurs.

The plesiosaur looks similar to the mosasaur in many ways, including overall shape and size, but was probably more closely related to turtles than to the mosasaur. Most plesiosaurs had a broad body, a very long neck and small head, and a fairly short tail. It propelled itself with its four long flippers like sea turtles do and was probably relatively slow. Some plesiosaurs, known as pliosaurs, had shorter necks and much larger heads, and swam much faster.

Like the mosasaur, the plesiosaur may have been warm-blooded, and gave birth to live babies instead of laying eggs. The longest plesiosaur was called elasmosaur, which had an extremely long neck. Some elasmosaur species had as many as 76 neck vertebrae. This is your reminder that almost all mammals have seven neck vertebrae. While the elasmosaur could grow up to 50 feet long, or 15 meters, much of its length was neck. Researchers used to think plesiosaur necks were flexible like a goose or swan’s neck, but new findings indicate that it was probably fairly stiff and could mostly just move side to side. Skin impressions show slightly wrinkled skin and some species may have had a tail fluke.

Long-necked plesiosaurs had large eyes and probably hunted by sight. Researchers hypothesize that the long neck might have allowed it to sneak up on fish before they could sense the movement of water from the plesiosaur’s approaching body.

At least one elasmosaur was a filter feeder, with interlocking teeth that it used to filter small prey from either the water or sand, or possibly both. It shows many similarities in skull shape to early baleen whales, too. Researchers think it had a valve at the base of the nostrils that closed them while the animal was feeding, since plesiosaurs and some other marine reptiles have nostrils that open into the mouth.

Like mosasaurs, plesiosaurs died out at the same time as the dinosaurs. They did not live on as the Loch Ness Monster, okay?

While mosasaurs and plesiosaurs lived throughout the world’s oceans, the various species of thalattosaur lived around what is now North America, western Europe, and parts of China. They lived during the mid-Triassic period, up to about 250 million years ago, and we don’t know a whole lot about them because we don’t have all that many fossils. We’re not even really sure where they fit in the reptile family tree.

The thalattosaur hunted in warm, shallow water but otherwise probably lived on land. It resembled a lizard, but with some interesting adaptations to the water. It had four short legs, probably had webbed toes, its body was slender and flexible, and its long tail widened at the end to form a paddle. Some species grew up to 13 feet long, or 4 meters. Some species had nostrils near the eyes, some had snouts that point downward, some had snouts that point upward. Some probably ate jellyfish and other soft foods, others probably ate fish, and a few had teeth that could crush mollusk shells—and had teeth on the roof of its mouth.

This actually isn’t unusual in reptiles and some amphibians. Most snakes have a double row of teeth in the upper jaw, one row growing from the jaw like normal, the other row growing from the roof of the mouth. Some lizards have small teeth that grow from the roof of the mouth, as do many frogs. These help the animal grasp its prey and keep it from escaping while it’s being swallowed whole. This is pretty neat, but it’s not as neat as shrinking iguanas. Nothing beats that.