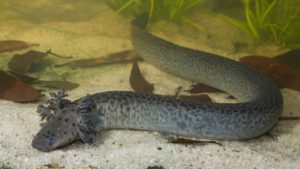 BREAKING NEWS, EVERYONE! A new giant salamander has been discovered, right here in the southern United States! It was only formally described YESTERDAY if you’re listening to this the night it goes live, assuming I manage to get it finished and uploaded before Friday morning. I should have put this together yesterday but didn’t think about it until today. Today being Thursday.

We’re talking about the reticulated siren, also called the leopard eel although it’s not an eel. It’s also not a leopard. There are three species of siren alive today, including the reticulated. Reticulated means spotted or mottled, if you were wondering. Sirens look a lot like eels except that instead of fins they have tiny vestigial forelegs and external gills. They have no hind limbs at all.

The greater siren lives in wetlands near the Atlantic coast of North America, specifically in the southern coastal states like Alabama and Florida. It grows over three feet long, or 97 cm, and is usually dark greenish or gray with tiny green or yellow dots along its sides. It eats water insects, mollusks, and occasionally plants. The lesser siren is very similar to the greater siren but doesn’t grow as big, and lives throughout much of the eastern United States and northeastern Mexico.

The reticulated siren is almost the size of the greater siren, and is gray-green and covered with a maze of spots. Its head is relatively small and its gill branches are large. It’s only been found in southern Alabama and the Florida panhandle.

The first reticulated sirens known to science were actually caught in the 1970s in Alabama, but although those three specimens were preserved and held in a museum for study, it wasn’t formally described. Another reticulated siren wasn’t found until 2009, when a herpetologist, David Steen, caught one while trapping water snakes and turtles in Florida.

Steen and biologist Sean Graham worked together to find more. It took them five years to trap three more specimens in a pond in Florida. After lots of study, including DNA analysis, they determined they had found a new species.

Now that we know the reticulated siren is a species of its own, researchers like Steen and Graham are working to find out more about it. They suspect it’s rare since it’s been so hard to find, and that means it needs to be protected. The wetlands where it lives are constantly in danger of being drained and filled in to make way for houses, Walmarts, parking lots, and other things we should put somewhere else and leave the wetlands alone.

Sirens are fully aquatic, specifically living in swamps, ponds, and boggy areas with a lot of vegetation they can hide in. If a siren’s pond dries up, it can burrow into the mud and aestivate in a cocoon of slime and sloughed-off skin, sometimes for a year or two until water returns to the area. But we don’t yet know if the reticulated siren can do this too.

That’s it for our breaking news update. We’ll be back on Monday morning as usual with an episode about strange reptiles.