This week let’s learn about some unusual cetaceans, river dolphins! 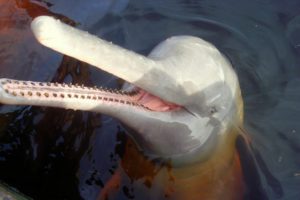 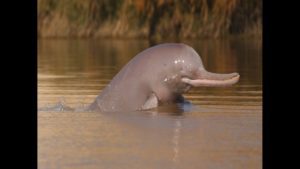 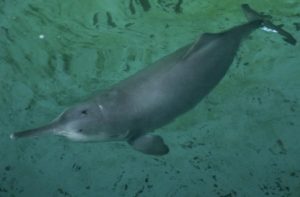 This week we’re going to learn about an animal I’ve wanted to cover for a long time but never got around to, the river dolphin.

All whales and almost all dolphins live in the ocean. They can survive for a short while in fresh water but need saltwater to thrive. But as the name suggests, the river dolphin lives in rivers, usually in fresh water and sometimes in the brackish water where rivers empty into oceans. Brackish just means a mixture of fresh and salt water, so it’s saltier than fresh water but not as salty as ocean water. When I was a kid I thought it meant ocean water with a lot of seeweed and dead leaves in it, because I thought the word brackish had something to do with bracken, which is a type of fern.

There are only a few species of river dolphin alive today. They live in warm water and have very little blubber as a result. They primarily use echolocation to navigate since river water tends to be muddy and hard to see through. Their flippers are broad and most have long snouts and flexible necks, or at least flexible compared to other cetaceans. All river dolphins are endangered due to pollution, habitat loss, and accidental drowning in fish nets, with the Chinese river dolphin only having been declared extinct in 2006.

River dolphins evolved from dolphins that once lived in the ocean, but most aren’t closely related to the marine dolphins alive today. Researchers think that when modern dolphins and other toothed whales evolved, they outcompeted their more primitive cousins, who moved into freshwater habitats as a result.

A few years ago, fossils of an extinct river dolphin that grew more than nine feet long, or almost three meters, were found in Panama. It lived around 6 million years ago in the Amazon River, but researchers don’t think modern river dolphins are closely related to it. In other words, freshwater dolphins have evolved repeatedly in different parts of the world to fit an available ecological niche.

In the case of the newly discovered fossil river dolphin, Isthminia panamensis, it probably lived in the warm, shallow Caribbean Sea between North and South America before the Isthmus of Panama formed. It took millions of years for the isthmus to form, with undersea volcanos first emerging from the ocean around 15 million years ago to form islands, then the land itself being pushed upward as the Pacific Plate slid underneath the Caribbean Plate. Researchers think the isthmus became fully formed around 3 million years ago, separating the Atlantic Ocean from the Pacific and connecting North and South America. Because we have Isthminia panamensis’s fossil from the Amazon River, we can hypothesize that by around 6 million years ago, there wasn’t enough of the original Caribbean Sea habitat to support the dolphins and they had already moved into the Amazon River and adapted to life in freshwater.

The river dolphin isn’t the only cetacean that lives in freshwater. There’s a species of porpoise called the finless porpoise that lives around Asia in shallow coastal waters, but often spends at least part of the time in mangrove swamps and in rivers not too far from the sea. Porpoises and dolphins look very similar but belong to different families, which means they aren’t actually very closely related at all. Like, seriously not related at all. Like, the difference between horses and cows. The finless porpoise can grow almost seven and a half feet long, or over two meters, and is called finless because it doesn’t have a dorsal fin. Instead, it has a dorsal ridge lined with tubercles, or bumps, that contain nerve endings. Researchers don’t know what purpose the tubercles serve. Porpoises use echolocation but their clicks are much higher in frequency than dolphins’, so high that humans can’t hear most of them.

Platanistidae are the Indian dolphins, with only one species alive today. The South Asian river dolphin lives in South Asia. There are two subspecies, the Ganges River dolphin and the Indus River dolphin. Young South Asian river dolphins have sharp, thin teeth, but as the dolphin matures, its teeth become flatter and squarish, almost like disks. It eats fish, crustaceans like shrimp, and some dolphins may also eat water birds and even turtles. Its rostrum, the word for a cetacean’s beak, is considerably longer in females than in males, sometimes like 8 inches longer, or about 20 cm.

The South Asian river dolphin is sometimes called the blind dolphin because its eyes are basically only useful for sensing light. They don’t even have lenses. It has a very small dorsal fin, not much more than a bump, a powerful tail, and is brown in color, and grows up to ten feet long, or almost 3 meters. It uses echolocation to navigate in the murky river water and find prey. It also usually swims on its side, which also gives it the name side-swimming dolphin. It does this so it can trail the tip of a flipper along the river bottom to feel for shrimp and mollusks.

It’s such an unusual dolphin, even for river dolphins, that researchers are studying fossil dolphins to figure out how the South Asian river dolphin evolved. Two years ago, a fossilized dolphin skull found in 1951 in Alaska and held in the Smithsonian’s collection ever since was evaluated and determined to be a distant relative of the South Asian river dolphin. It lived about 25 million years ago, around the time that ancient whales were evolving into the two groups we have today, toothed whales, which includes dolphins, and baleen whales.

The South Asian river dolphin has been evolving separately from marine dolphins for at least the 25 million years since its relative was swimming around in the Arctic Ocean. Research on its echolocation suggests that the Ganges River subspecies of the South Asian river dolphin probably has biosonar that more closely resembles that of ancient toothed whales than modern toothed whale and dolphin echolocation does. It has a much deeper voice than marine dolphins of about the same size have.

Amazon river dolphins eat fish, including piranhas, freshwater crabs, turtles, and other small animals. Sometimes a dolphin will participate in cooperative hunting with giant otters and the tucuxi, another species of dolphin that lives in the Amazon basin. The three species eat different types of fish so they all benefit from hunting together.

The tucuxi isn’t actually a river dolphin although at least some individuals live in rivers. It’s considered a marine dolphin, and you can tell the difference just by looking at it. It looks like a small bottlenose dolphin, about five feet long, or 1.5 meters, and unlike river dolphins its rostrum is relatively short.

The third family of river dolphin is Pontoporiidae, and there’s only one species alive today. Just to show that nature isn’t cut and dried, the La Plata dolphin doesn’t always live in fresh water. It lives around the coast of southeastern South America and while some do spend their whole lives in rivers, most La Plata dolphins live in the ocean.

Finally, let’s talk about the Chinese river dolphin, the one that’s recently extinct, also called the baiji. Technically it’s functionally extinct because although there may be one or two still alive, there aren’t enough to continue the species into another generation. River dolphins do very poorly in captivity, usually dying within months, so even if conservationists had billions of dollars and the cooperation of every single person on earth to save the Chinese river dolphin, there’s nothing they could do at this point. In fact, in 2006 a research team searched for the dolphin for six weeks to put a conservation action plan into place for it, but they didn’t find any. That’s when it was declared extinct.

The Chinese river dolphin lived in the Yangtze River and grew up to 8 feet long, or 2.4 meters. It was blue-gray with a paler belly, and like many other river dolphins, its rostrum was slightly upturned. It also had poor vision. It was once common along much of the Yangtze, some 1,100 miles of river, or 1,700 km, but massive increases in pollution of the river, collisions with boats caused by the noise of boats overwhelming the dolphins’ echolocation, poaching, entanglement in fishing nets, loss of habitat due to damming of the river, and overfishing drove it to extinction within about five decades. The last confirmed sighting of a Chinese river dolphin was in 2002, with an unconfirmed sighting in 2007.

This is a depressing way to end the episode, so let’s finish up with a long-ago relative of the South Asian river dolphin. Zarhachis flagellator lived during the Miocene, about 16 million years ago, and had a really long rostrum. Like, super super long. Its skull was about four feet long, or 1.2 meters, which makes it sound like it must have been a really big dolphin, but it wasn’t. Its actual braincase was less than a foot long, maybe 8 inches or so, or 20 cm. The rest of the length was rostrum. In other words, it had a head about the size of your head, and a long thin beak full of sharp teeth that was something like three feet long, or almost a meter. Tonight when you brush your teeth, think about that. Think about how hard it would be to reach all your teeth if you had a mouth that stuck out three feet from your head. You’d need a really long toothbrush.