This week is another suggestion from Wyatt, all about the cheetah!

The cheetah moves fast and can zigzag at the same time: 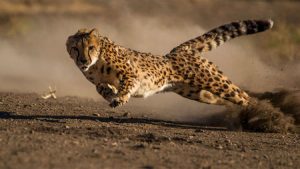 Baby cheetahs have silvery manes on their backs: 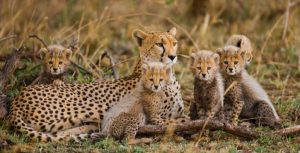 Cheetahs and dogs get along well in captivity: 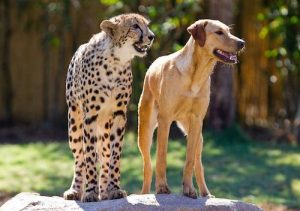 This week we’re talking about cheetahs! This is a suggestion from Wyatt, and it’s also an animal I’ve had on my list to cover for a long time.

You may think the cheetah is just another big cat, but it’s different from other felids in some interesting ways. It’s most closely related to the puma, also called the cougar, and to the jaguarundi, both of which live in the Americas, but the Cheetah mostly lives in Africa. It was once also common throughout parts of Asia, but there are probably fewer than 50 Asiatic cheetahs left alive in the wild today.

The cheetah’s genetic profile shows a bottleneck that occurred about 12,000 years ago. That means the worldwide population of cheetahs dropped so low that it became inbred, which lowered its genetic variability. This is about the same time that a lot of animals went extinct at the end of the Pleistocene, so we’re very lucky the cheetah survived. Since it migrated into Africa about 12,000 years ago, it’s possible that it only survived because it found the right combination of habitat and prey animal at just the right time. The cheetah’s genetic profile actually shows another bottleneck that happened around 100,000 years ago, which researchers think may have occurred as it migrated across Asia. Whatever caused these genetic bottlenecks, the result is that all cheetahs are genetically nearly identical.

Ordinarily, low genetic diversity means an animal is vulnerable to disease and infection due to a weak immune system. But cheetahs hardly ever get sick in the wild. A long-term study of cheetahs on protected land in Namibia found that zero of the 300 cheetahs showed symptoms of infection or disease. The team studying the cheetahs captured some of the cheetahs long enough to perform immunological tests on them—which didn’t hurt them—and compared the results with those of leopards also living in the region. They found that while the leopards had a stronger overall immune system, the cheetahs had a much stronger initial immune response.

The cheetah is tan or yellowish with a white belly and throat. It has black spots over most of its body, and partial or complete rings at the end of its long tail. It has black streaks on its face called tear streaks since they start at the inner corner of the eyes and trace down the sides of the nose and over the cheeks. No other felid has tear streaks, and some researchers think it may help the cheetah see better in bright sunlight.

The cheetah has a small head, long legs, and a long tail and stands about three feet tall, or 90 cm. Its tail is almost as long as it is tall. It’s lightly built. In fact, you might say it’s built for speed.

Because, of course, the cheetah is the fastest land animal alive. The fastest cheetah ever reliably clocked ran at 70 mph, or 112 km/hour. That’s as fast as a car racing down the interstate. Of course, the cheetah can’t keep up that pace for very long, but it can run at around 40 mph, or 64 km/hour, for longer. It has the real-life equivalent of a turbo button in some video games. If it’s chasing an antelope, which is mostly what it eats, and it’s close but not gaining, it hits that turbo speed and zoom! It accelerates long enough to catch the antelope. And it only needs about two seconds to reach its maximum speed. Not only that, it can run that fast while twisting and turning through brush, since antelopes also switch direction frequently to try to outmaneuver the cheetah.

Wyatt specifically wants to know how cheetahs run, and it’s definitely worth going into. The cheetah is incredibly well-adapted for high-speed hunting. It looks more like a greyhound than a big cat, with a deep chest and long slender limbs. The deep chest allows room for the cheetah’s oversized heart and lungs. It also has large nasal passages so it can get plenty of oxygen with every breath. Its long tail acts as a rudder, helping it turn quickly without slowing down. The cheetah also can’t retract its claws all the way like most felids. It can extend the claws somewhat, but they’re always partially extended. This means the cheetah has better traction, since the claws bite into the ground as it runs.

But there are other adaptations that aren’t so obvious. Its leg bones are arranged so that they’re more stable, reducing the risk of a cheetah putting a foot down wrong and wrecking. The cheetah’s spine is long and flexible, and it actually stretches as much as 30 inches, or 76 cm, while the animal is running, to give it an even longer stride.

Its inner ear is also unique. The inner ear is what allows a mammal to balance and move without getting disoriented or falling over. The inner ear consists of three tiny canals filled with fluid and sensory hair cells. The canals are oriented in different directions, so when you move your head around, the liquid in the canals moves too, and the sensory cells tell the brain which direction the liquid is moving, and the brain puts it all together and then you know exactly where you head is in comparison to the ground. And the best thing of all is, you don’t actually have to think about it, your brain just does it automatically. That’s good, because it sounds really complicated.

But the canals in the cheetah’s inner ear are different from those of all other felids. They’re bigger and longer, which allows the cheetah’s brain to fine-tune exactly where its head is even when it’s moving so fast that if it was a car, it would be pulled over for speeding. This means that the cheetah can adjust the position of its head as it runs so that it can get a better view of its surroundings, called visual stability.

We know so much about how cheetahs run because cheetahs in captivity enjoy chasing an artificial lure. Think of it like a scary version of your pet cat chasing the red dot. This allows scientists to study how the cheetah moves while running, using high-speed cameras and equipment called force plates that measure pressure. In a study published in 2012, researchers compared cheetahs and greyhounds and discovered that even when the two animals run at the same speed, the cheetah keeps its feet on the ground slightly longer than the greyhound. Even though the difference is small, it’s enough to reduce overall stresses on the cheetah’s legs, which means it can run faster without risking an injury. Its toe beans, also called foot pads, are also large and tough, more like a dog’s than a cat’s.

In fact, a lot of the cheetah’s adaptations for running make it resemble a canid more than a felid. That’s a good example of convergent evolution, since dogs and other canids mostly hunt by pursuing their prey while many felids use ambush tactics instead. Because of its adaptations to running, the cheetah can’t climb very well. It’s also active during the day, called diurnal, unlike most felids which are nocturnal.

It’s a social animal too. Males often live together in small groups called coalitions, either brothers or unrelated males. Females are more solitary, but when a female doesn’t have cubs to take care of, she usually spends at least part of her time with other cheetahs.

The cheetah can’t roar, but it makes a lot of other noises. Last week we heard a clip of a chirping cheetah that sounded like a bird, but that’s not the only sound a cheetah makes. It can purr, meow, chirp, growl, yowl, and so forth. Here are some of the sounds cheetahs make. I’ll put more at the end of the episode.

Cheetah cubs have a mane of silvery-gray fur on the back, which might act as camouflage but which also makes the cubs look a lot like tiny honey badgers. If you remember episode 62, about the honey badger, you may remember why. But even so, lots of animals eat cheetah cubs. Researchers estimate that in some habitats, only about 4% of all cheetahs born actually live long enough to grow up.

The cheetah is fast, but larger, stronger predators live in the same areas where it lives. Lions, leopards, hyenas, and other animals will wait until a cheetah kills an antelope, then will try to take the kill from the cheetah. Habitat loss is also a major factor in the survival of the cheetah. And, of course, people hunt cheetahs, either as trophies or because they mistakenly believe cheetahs kill livestock. Studies have proven that cheetahs actually much prefer antelopes and other wild animals.

Young cheetahs are also sometimes captured to sell as exotic pets. This isn’t a good thing, since quite often the cheetahs aren’t properly cared for, but it has been going on for a very long time. The cheetah isn’t a very aggressive animal and becomes tames fairly easily. In Egypt, tame cheetahs were used to hunt game as far back as 1500 BCE, and probably earlier, although only royalty owned them.

Despite this, cheetahs don’t do very well in captivity. They need a lot of space to move around, and if they don’t have enough space, they suffer from stress-related illnesses. Even the best zoos have trouble taking care of cheetahs properly. The reason you see so many photos of cheetahs and dogs together is that zoos have discovered that dogs make good companions for cheetahs, helping them stay calm. Cheetahs rarely breed in captivity.

So, while we’re talking about really fast animals, what’s the fastest living animal known? The cheetah is the fastest land animal, but the fastest flying animal is the peregrine falcon, which can dive at a recorded speed of 242 mph, or 389 km/hour. For regular flying, the white-throated needletail swift can fly at 105 mph, or 169 km/h, while the Brazilian free-tailed bat has been clocked at more than 99 mph, or 160 km/hour. The fastest swimming animal known is the black marlin, which can swim at 82 mph, or 132 km/h. But, of course, we haven’t measured every living animal to see how fast they can all run, swim, or fly. We didn’t even know about the Brazilian free-tailed bat’s speed until a study a few years ago. The researchers didn’t believe their data at first. But it seems pretty clear that the cheetah doesn’t have a whole lot of competition in the fastest land animal race.