SOMEONE forgot their flash drive at work, so here’s a short but hopefully interesting episode about a mystery animal, a zebra with spots instead of stripes! 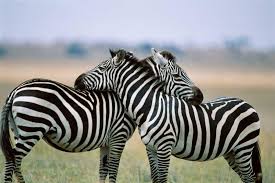 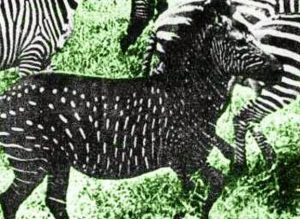 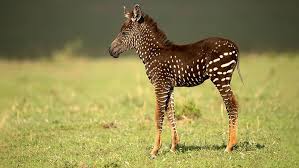 This episode was going to be another listener suggestion, but I left my flash drive at work that has all my research and the half-written script on it. So that episode will be next week, and instead this week we’re going to learn about the mysterious spotted zebra.

A tour guide named Antony Tira in the Masai Mara National Reserve saw an unusual-looking zebra foal in the herd. Instead of the familiar black and white stripes of other zebras, with white belly, the foal was black all over except for small white spots. The foal has been nicknamed Tira after its discoverer.

Zebras, of course, are famous for their black and white stripes. But if a genetic mutation causes the ordinary striped pattern to be broken up, it can look like spots, or in some individuals narrow streaks. The only problem is, the spots on the zebra are white on a black background. You’d think that it would be the black stripes that would end up as black spots on a white background.

But, it turns out, we’re looking at zebras wrong. Zebras aren’t white with black stripes, they’re black with white stripes. So when a rare zebra is born with spots instead of stripes, the spots are white on a black background.

When a zebra embryo is developing inside its mother, its coat is entirely black. It develops its stripes late in its development, when skin cells form the pigments that will give the hair its color. The white fur grows from cells that contain less pigment than cells that grow black hair. Not only that, underneath the zebra’s hair, its skin is black.

Zebras live in parts of southern Africa on grasslands and savannas in both tropical and temperate areas. The common plains zebra is one of three species alive today, with a number of subspecies. It typically grows a little over four feet tall at the shoulder, or 1.3 meters, or about 12 hands high if you are measuring it the way you measure its close relation, the horse. It eats grass and other tough plants and lives in small herds. Each zebra’s stripe pattern is as unique as a fingerprint.

A zebra’s stripes serve several purposes. It helps camouflage the animal, which sounds absurd at first since there’s nothing quite as eye-catching as a zebra. But a bunch of striped animals milling about together can make it hard to figure out where one zebra ends and the next one begins. The pattern disrupts the body’s outline, too, which means a predator may have trouble figuring out where exactly the zebra is, especially when it’s partially hidden by tall grass and brush.

Not only that, the white hair helps reflect some of the sun’s heat away from the zebra. Dark colors absorb heat, and the zebra spends a lot of time in the hot sun. But having dark hair and skin helps keep the zebra from getting sunburned. That’s right, animals can get sunburned just like humans, although their fur generally helps block much of the sun’s infrared rays, which are the part of the light spectrum that causes sunburn. The dark pigment in the skin, called melanin, also helps block some of the infrared, stopping it from penetrating deeper into the skin.

Results of a study published in early 2019 shows that the cooling effects of the zebra’s coat are more complicated than just color, though. The zebra can raise the black hairs of its coat while the white hairs remain flat. The researchers propose that this helps transfer heat from the skin to the surface of the hairs by causing tiny air currents to form, which helps the zebra’s sweat evaporate more quickly and cool the body.

But another, more surprising reason for the stripes is to deter biting flies, especially the tsetse fly and the horsefly. Both carry diseases that can be fatal to zebras and other animals. Researchers had long noticed that zebras seem to be bitten less by flies than other animals are, and studies show that this is actually the case. In a study published at the beginning of 2019, some horses were given zebra-striped coats and monitored to see how flies reacted. It turns out that while the flies still approached the horses, they didn’t land on them nearly as often as they should have. Sometimes they’d even bump into the horse before flying away again without landing.

Researchers are still working out why. One hypothesis is that the tiny air currents caused by the raised black hairs make the air around the zebra just unstable enough that flies have trouble landing on the animal. Another is that the flies are attracted to linearly polarized light, which is disrupted by the stripes and make it hard for a fly to land on the zebra. In effect, they can’t actually see where the surface of the body actually is because their little fly eyes are dazzled by the pattern.

All this means that spotted zebras are at a disadvantage compared to ordinary striped zebras. The genetic mutation that causes the spots is called pseudomelanism, which basically causes more skin cells to produce more pigment than they should. The opposite of pseudomelanism is partial albinism, where the skin cells produce less pigment than they should. This results in a zebra that looks like it has cream-colored or pale gold stripes on a white background. Occasionally true albino zebras are born, where none of the cells produce pigment and the zebra is pure white without stripes at all.

Hopefully, little Tira will be fine despite having spots instead of stripes. The spotted zebra foal is definitely getting a lot of attention from photographers, tourists, and scientists.