This week we have two more listener suggestions, so thanks to Rosy and Simon! They both suggested small but intensely interesting fish!

The only smooth handfish specimen in the whole world: 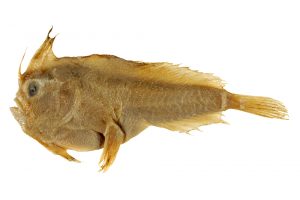 In case you were wondering why it’s called a handfish (this one is a spotted handfish): 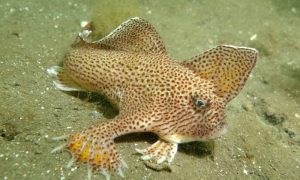 A red handfish. You’d be angry too if there were fewer than 100 individuals left in your species (photo by Rick Stuart-Smith): 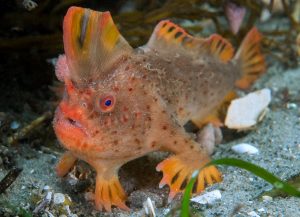 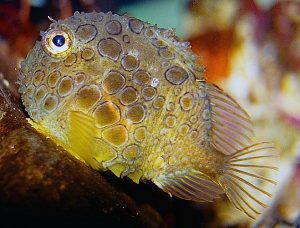 HOW IS THIS REAL? I AM GOING TO DIE. These are real lumpsuckers on a real balloon in an aquarium. Apparently it’s a birthday party thing to do in Japan: 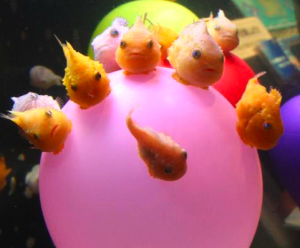 The sucker part of the lumpsucker: 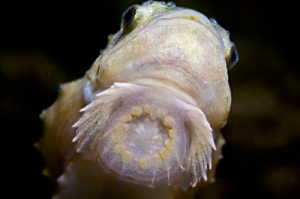 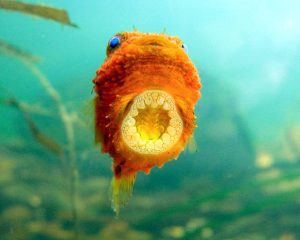 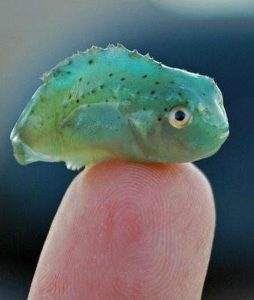 This week we’re going to learn about two interesting fish, but first a CORRECTION!

In the hyena episode last week I called the hyena a canid, and it’s not! Yikes, that was a major blunder on my part. Thanks to Bal for the correction. Hyenas aren’t even very closely related to canids at all. They’re in the family Hyaenidae while canids are in the family Canidae, although both are in the order Carnivora along with cats and walruses and raccoons and weasels, etc. AND thanks to Simon who also let me know that the striped hyena lives in the Middle East and Asia as well as Africa. Sorry, y’all. I hate when I make mistakes.

The smooth handfish used to be a common fish that lived off the coast of Tasmania in warm, shallow water. It was reddish-brown with darker brown markings, and it grew to about 1 3/4 inches long, or 4.4 cm. But the area where it lived was dredged so intensively for oysters and scallops up until 1967 that the fish’s habitat was destroyed. It was described in 1802 from a single specimen caught by a French naturalist, but that’s the only smooth handfish anyone ever bothered to collect for science. And now it’s the only specimen we have to study.

The reason the smooth handfish was so vulnerable to habitat loss is that it didn’t have a larval stage where newly hatched fish could disperse to new areas by floating on currents. Handfish eggs hatch into teeny baby handfish, not larval handfish. As a result, it was restricted to only specific areas and when those areas were destroyed by dredging, the fish was driven extinct. And the really awful thing is, the only reason people stopped dredging for oysters and scallops is because they’d been so overfished that there basically weren’t any left. The smooth handfish is actually the first marine fish known that has gone extinct in modern times.

There are 13 other species of handfish known in the world, but they’re all endangered due to pollution, habitat loss, and the spread of invasive species. Like the smooth handfish, other handfish species lay eggs that hatch into juvenile fish instead of larval fish, so they’re also especially vulnerable to habitat loss. For example, there are fewer than 100 red handfish alive in two small areas off the coast of Tasmania. We know because each fish has unique markings, which allows conservationists to identify individuals. A group called the Handfish Conservation Project has put together a database of living individuals, and if you donate at least $1,000 (in Australian dollars) you get to give one of the fish a name. I’ll put a link in the show notes so you can go look at the fish and see the names some of them have been given. The names include Ginger Ninja, Knuckles, Rosie Palm, and The Stalker.

The handfish is called that because its pectoral fins look like big flat hands that it uses to walk along the ocean floor. It’s actually related to the anglerfish, and like anglerfish it has an illicium above its mouth. Anglerfish use the illicium as a lure to attract animals that it then gulps down, but the handfish’s illicium is relatively small and researchers aren’t sure if all species use it as a lure. We’re not even completely sure what handfish eat, although there are reports of handfish eating polychaete worms, small fish, and crustaceans like amphipods and shrimp.

All the species live off the coast of Australia, especially around Tasmania. The largest species only grows to about 6 inches long, or 15 cm.

That is pretty much all we know about the handfish, so let’s move on to our other fish today, a suggestion by Rosy. Rosy wants us to talk about the lumpsucker, and I cannot argue with this because they are weirdly adorable fish.

The lumpsucker lives in cold waters near the Arctic. Most species live in the North Pacific but some also live in the North Atlantic. It doesn’t swim very well and, like the handfish, it spends most of its time on the sea floor. But unlike the handfish, which lives in shallow coastal water, some lumpsuckers live in the deep sea, up to 5,600 feet deep, or 1,700 meters. It eats small crustaceans, mollusks, polychaete worms, and other small animals, and the deep-sea species may also eat small jellyfish.

There are around 30 species of lumpsucker known, and we don’t know a whole lot about most of them. Most are small, but the biggest can grow 20 inches long, or 50 cm, and weigh as much as 11 lbs, or 5 kg. That’s Cyclopterus lumpus, which varies in color from blue or gray to yellowish or brown, and sometimes greenish, although during breeding season males turn orangey-red. The female’s eggs are eaten by people as imitation caviar, and it’s the only lumpsucker that is fished for as a result. Some people eat the fish itself too, especially in Iceland, but usually only the males. The females reportedly taste bad.

Cyclopterus lumpus has become a helpful addition to salmon farming in a surprising way. It eats parasites called sea lice, which infest the salmon. The lumpsuckers do such a good job cleaning the salmon of sea lice that fish farmers don’t have to use parasiticides.

The lumpsucker gets its name because it’s a little round lump of a fish and it has modified pelvic fins that act as a little sucker on its belly that lets it stick to things. The lumpsucker also has little hard bumps on its body. It has big round eyes and a little round mouth. Basically what I’m trying to say is the best word to describe a lumpsucker is ROUND. So round.

The lumpsucker doesn’t have a swim bladder. Instead, it has jelly-like fat deposits that increase its buoyancy. The female lays her eggs in rock crevices and the male stays to guard the eggs. He uses his tail and tiny fins to push water over the eggs so they stay aerated, and remains with them until they hatch several weeks later. The larvae are well developed and already have suckers.

Probably the most well-loved species of lumpsucker is the Pacific spiny lumpsucker, which is the roundest and most adorable, and is often kept in aquariums. It grows to about three inches long, or 7.5 cm, and it varies in color. Females are usually greenish while males are orange or reddish, but individuals can be gray, brown, or yellow too. In the wild it lives around Japan, northern California, and many other areas, where it spends most of its time stuck to pieces of eel grass, kelp, or rocks, making adorable faces at things. There’s a link in the show notes to a little video of one sticking itself to a rock, looking around, moving slightly with its teeny fins, sticking itself back to the rock… You really need to watch it. It will make you feel very calm.

You can find Strange Animals Podcast online at strangeanimalspodcast.blubrry.net. That’s blueberry without any E’s. If you have questions, comments, or suggestions for future episodes, or if you have a great idea for a red handfish name, email us at strangeanimalspodcast@gmail.com. If you like the podcast and want to help us out, leave us a rating and review on Apple Podcasts or just tell a friend. We also have a Patreon at patreon.com/strangeanimalspodcast if you’d like to support us that way.