Let’s find out about some gigantic birds this week! Thanks to Pranav and Richard for the suggestions! 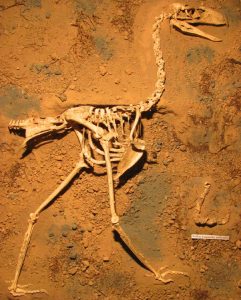 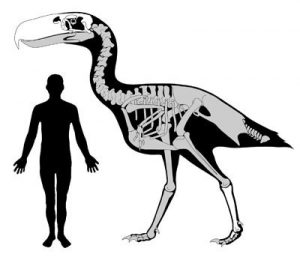 A red-legged seriema and an unfortunate snake: 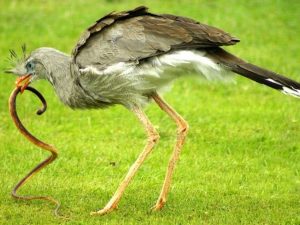 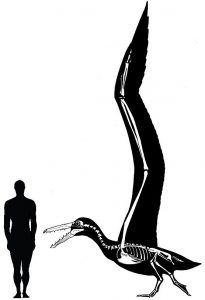 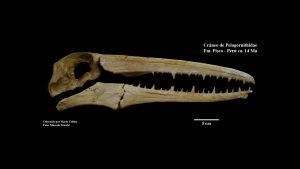 This week we’re going to learn about some gigantic extinct birds! Pranav wants to hear about Phorusrhacidae, also known as the terror bird. Something called a terror bird is definitely going to be interesting. My brother Richard also tweeted me about some huge extinct birds called pelagornithids, so we’ll talk about them too. Both birds were huge and successful, but extremely different from each other.

Most terror birds lived in South America, with one species known from southern North America. A few newly discovered bird fossils from Africa and Europe may have been close relations of terror birds, but palaeontologists are still studying them.

Various species of terror bird ranged in size from about 3 feet tall to 10 feet tall, or 1 to 3 meters, and had long, strong legs that made them fast runners. The terror bird also had a long, strong neck, a sharp hooked beak, and sharp talons on its toes. The beak was strong but the jaw muscles were relatively weak. Researchers think that it ambushed prey and chased it down, then either kicked it to death with its sharp talons or held it down with its feet and stabbed it to death with its beak. Smaller species may have grabbed its prey and thrown it back down with enough force to injure, stun, or outright kill the animal. It may have swallowed small prey whole and regurgitated pellets made up of compressed fur and bones, the way many modern carnivorous birds do today.

Although the beak was strong, it was also hollow. This would have made it weigh less, which meant that the bird could move its head more quickly. Some researchers think that it might also have acted as a resonant chamber, and that the bird could clap its beak closed to make a loud noise to communicate with other terror birds. It had excellent hearing and vision, but a poor sense of smell.

Many details of what we know about terror birds come from a single specimen discovered in 2010 in Argentina. The bird lived around 3 million years ago and stood four feet tall, or 1.2 meters. It was described in 2015 and is named Scaglia’s magnificent bird. I am not going to attempt to pronounce its scientific name [Llallawavis scagliai], but I’ll put it in the show notes along with a picture. Almost the entire skeleton is preserved in stunning detail, including details that hardly ever preserve, like the tiny bones that help the eye focus. Studies of the tiny ear bones and other details of the ear indicate that its hearing was most acute at low frequencies, which meant it would have been good at hearing footsteps. It also probably had a deep voice.

The terror bird had wings, but they were small and probably only used for display. The wings did have claws, though, and may have been used to fight other terror birds over mates or territory. Young terror birds of some species might have been able to fly, although adults certainly couldn’t.

The earliest known terror bird, Paleopsilopterus, lived about 60 million years ago in what is now Brazil. It was relatively small, only about three feet high, or 1 meter. It evolved only a few million years after the non-avian dinosaurs went extinct, and its descendants became larger and more fearsome until they were apex predators throughout South America.

Kelenken, for instance, grew up to ten feet tall, or three meters, and had an enormous beak, 18 inches long or almost 46 cm. It lived in what is now Argentina around 15 mya. It’s the tallest terror bird known but it was more slenderly built than others so was probably a faster runner. It was only discovered in 1999.

Brontornis, however, was the one that puts the terror into terror bird. It grew over 9 feet tall, or 2.8 meters, but it was massively built. It probably wasn’t a very fast runner and would have definitely been an ambush predator. Most likely it hid among trees or other tall vegetation, and when an animal came too close, BOOM! THERE’S A TERROR BIRD! RUN! TOO LATE, ARGH!

Titanis lived in parts of North America, with fossils found in Texas and Florida. It probably stood a little over eight feet tall, or 2.5 meters, although we don’t have any complete skeletons so can only estimate its actual size compared to other species of terror bird. You may find information online that says Titanis lived as recently as 10,000 years ago in Florida, and that it used the claws on its wings like hands to help catch prey. Both these things are wrong, unfortunately. The fossil bones found in the Santa Fe River in Florida had washed out of their original location and were mixed in with much more recent bones, and there’s no evidence that any terror bird used its wings like hands. Terror birds were descended from birds that could fly, not descended directly from dinosaurs, so its wings were still highly modified for flight.

Titanis lived in North America about five million years ago. But how did it get to North America from South America before the Isthmus of Panama formed around three million years ago? Before then, a big stretch of ocean separated the two continents. Researchers think it island-hopped, as the tops of mountains and hills in what is now Central America first emerged from the ocean as sea levels dropped, forming islands. Volcanoes also formed islands in the area. Titanis may have traveled to these islands by swimming or rafting during storms.

Terror birds went extinct after the Isthmus of Panama opened up when sea levels lowered. This connected North and South America, which allowed animals from North America to cross into South America and vice versa. The Andes Mountains also formed about this time and changed the climate of much of South America. Forests became open savanna where terror birds wouldn’t have been able to hide to ambush prey. Climate change combined with increased competition from saber-toothed cats and other North American predators probably led to the terror birds’ extinction.

There are no descendants of terror birds living today, but its closest living relations are probably the seriema birds, the red-legged and the black-legged seriema. Both live in South America and both are carnivorous birds that eat small animals like rodents, lizards, snakes, and even other birds. When it catches an animal, it beats it against the ground until it dies. It will also sometimes eat fruit and eggs.

The red-legged seriema stands a little over three feet tall, or a meter, with long legs, long neck, and long tail. It’s mostly brown and gray and it has a fan-shaped crest low down on its forehead, just above the bill. The gray-legged seriema looks very similar but is mostly gray. The seriema also has a sickle claw on each foot that it uses to cut pieces off its dead prey so it can swallow them more easily.

The seriema can fly, but it prefers to walk or run. It can run up to 15 mph, or 25 km/h. It builds its nest in low bushes so it can just hop up onto the nest instead of having to fly. It’s also aggressive and will attack animals much larger than it is, driving them away from its nest or chicks. Farmers sometimes catch young seriemas and tame them, then allow them to patrol the farmyard to catch rats and snakes and drive away larger predators.

And like the terror bird, pelagornithids were huge, but in a different way than terror birds. They were sea birds that may have superficially resembled modern albatrosses, but they were much larger. The largest living albatross has a wingspan of about 11 1/2 feet, or 3.5 meters, but the largest known pelagornithid had a wingspan estimated at up to 21 feet, or almost 6.5 meters. Its wings were narrow and pointed like albatross wings are.

Researchers think that the pelagornithid probably mostly ate soft-bodied animals like squid and other cephalopods, because its teeth were not very strong. It probably scooped its prey up from the water while flying, like many modern seabirds do, although it could probably also sit on the water and dip its long, strong beak down to catch anything that swam too close. Its bones were too delicate for diving. It may have had a throat sac like a pelican too. It was probably white or gray in color and its wings and tail were probably black, which is the most common coloration for sea birds of any kind.

It had short legs but enormously long wings, so long that it probably couldn’t flap them. Its strongest muscles were the ones that held the wings out straight. It was definitely a bird, of course, but it was proportioned more like a flying reptile, Pteranodon, even though they weren’t related. You know what that means, of course. Convergent evolution! Researchers think the pelagornithid spent almost all its time soaring on ocean breezes, scooping up cephalopods and fish to swallow whole, and that Pteranodon probably did the same. These days, modern albatrosses fill that particular ecological niche, and the albatross has many similarities to the pelagornithid too.

Pelagornithids of various species were found throughout the world, from the Arctic and Antarctic to the tropics. It was extremely successful and unlike the terror bird, which was restricted to land, it could travel as far as it liked as long as it had a breeze to keep it aloft. It evolved soon after the non-avian dinosaurs went extinct and didn’t die out until the beginning of the Pleistocene. What happened then? Why aren’t these enormous birds still flying around?

The Pleistocene, of course, was the ice age, or more properly the ice ages. Its onset resulted from a lot of factors, including the movement of continents that changed ocean currents radically. Once the changes started, they accelerated quickly. As more water froze and became massive glaciers that weighted down entire continents, sea levels dropped and more land was exposed, including the Isthmus of Panama that connected North and South America. This would have radically changed the air currents that pelagornithids used to travel around the world, from nesting sites to feeding sites and back. It also drove many sea animals to extinction as their environments became too cold or too warm for them to adapt to, or the water where they lived just dried up completely.

The one place where pelagornithids couldn’t go was across continents. They needed constant sea breezes and lots of water where they could catch prey, and steep cliffs near water to nest on. As the ecological changes of the Pleistocene became more pronounced, pelagornithids had more and more trouble surviving, and finally they went extinct. Modern albatrosses, gulls, and cormorants expanded at the same time to fill the ecological niche left open by the pelagornithid.

While there are no living descendants of pelagornithids, researchers tentatively think they’re most closely related to living ducks, geese, and swans. Since most pelagornithid fossils are badly damaged and fragmented, so that we only have one or two bones preserved from any given animal, it’s hard for scientists to make conclusions as to what they were most closely related to. Hopefully more and better fossils will be found soon so we can learn more about these gigantic birds!