It’s another extinction event episode! This one’s about the end-Permian AKA the Permian-Triassic AKA the GREAT DYING. 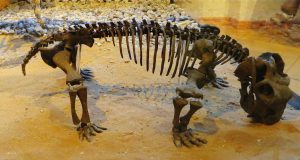 Lystrosaurus may have looked something like this but I hope not: 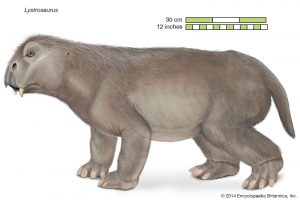 This artist’s rendition of lystrosaurus looks a little less horrific but it might not be any more accurate:

It’s time for our next extinction event episode, and this week it’s the big one. Not the extinction event that killed the dinosaurs, but one you may not have heard of, one that almost destroyed all life on earth. I mean, obviously it didn’t and things are fine now, but it was touch and go there for a while. It’s the Permian-Triassic extinction event, or end-Permian, which took place just over 250 million years ago. It was so bad that scientists who aren’t given to hyperbole refer to it as the Great Dying.

Don’t worry, we won’t talk about extinction the whole time. We’ll also learn about some interesting animals that survived the extinction event and did just fine afterwards.

We have a better idea of what happened at the end of the Permian than we have about the earlier extinction events we talked about in episodes 205 and 214. Right about 252 million years ago, something caused a massive volcanic eruptive event in what is now Siberia. Some researchers speculate that the cause of the volcanic eruptions may have been a huge asteroid impact on the other side of the Earth, which was so powerful that it caused magma to move away from the impact like water sloshing in a jostled glass. The magma rose up toward the earth’s crust and eventually through it onto the surface.

The result was probably the largest volcanic event in the last half-billion years and it continued for an estimated two million years. Most of the eruptions were probably pretty low-key, just runny lava pouring out of vents in the ground, but there was just so much of it. Lava covered almost a million square miles of land, or 2.6 million square km. Ash and toxic gases from some eruptions also ended up high in the atmosphere, but one big problem was that the lava poured through sediments full of organic material in the process of turning into coal. Lava, of course, is molten rock and it’s incredibly hot. It’s certainly hot enough to burn a bunch of young coal beds, which added more ash and toxic gases to the air—so much ash that shallow water throughout the entire world became choked with ash.

The carbon dioxide released by all that burning coal caused severe ocean acidification and ocean anoxia—a lack of oxygen in the water. But it gets worse! A lot of lava erupted into the ocean right at the continental shelf, where the shallow coastal water becomes much deeper. This is exactly the place where you find methane deposits in the sediments on the ocean floor. When those deposits were suddenly disturbed by lava flowing into them, all the methane in the formerly tranquil depths was released and bubbled to the surface. Methane is a powerful greenhouse gas, meaning that if a whole lot of it ends up in the atmosphere in a short amount of time, it can cause rapid global warming—much faster than that caused by carbon dioxide. This global warming would have happened after a period of global cooling due to reduced sunlight reaching the earth through ash clouds, which lasted long enough and was severe enough that sea levels dropped as glaciers formed. Then everything heated way, way up. The ice caps melted, which may have led to a stagnation of ocean currents. This in turn would have contributed to the water’s anoxicity and toxicity. The average temperature of the ocean would have increased by almost 15 degrees Fahrenheit, or 8 degrees Celsius. Atmospheric warming may have been as much as 68 degrees Fahrenheit in places, or 20 degrees Celsius. That’s not the average temperature of the world, that’s the temperature increase.

So, basically, everything was terrible and it happened very quickly in geologic terms. A 2018 study found that everything looked pretty much fine for the 30,000 years leading up to the great dying. Some researchers even think the initial extinction event might have taken place over just a few centuries.

Marine animals were affected the most, especially marine invertebrates. Trilobites and placoderms went extinct, eurypterids went extinct, and corals went extinct until about 14 million years later when modern corals developed. Some researchers estimate that 95% of all marine species went extinct.

Things were better on land, but not that much better. At the end of the Permian, life was good on land and it was especially good for insects because of the high percentage of oxygen in the air and the variety of plant life in huge swamps around the supercontinent Pangaea. The largest insects that ever lived were buzzing around in the Permian. This included an order of insects called Meganisoptera, or griffinflies. Griffinflies looked like dragonflies and may be related to them. Some species had a wingspan 28 inches across, or 71 cm. The arthropod Anthopleura, sometimes called the giant millipede, lived in the Permian too. Some species grew six feet long, or 2.5 meters, and were about 18 inches wide, or 45 cm. It looked like a millipede but had even more legs. It probably looked scary, but it only ate plants as far as we know.

Instead of actively breathing the way most vertebrates do, most invertebrates use a passive system to absorb oxygen from the air. This is great when there’s a lot of oxygen. When the level of oxygen drops, though, the largest species can’t absorb enough oxygen to function and die out rapidly. That’s one reason why you don’t have to worry about spiders the size of bears. So all the large invertebrates and a lot of the smaller ones went extinct as oxygen was replaced with carbon dioxide, methane, and other toxic gases in the atmosphere.

The acid rain caused by toxic gases and the reduced sunlight caused by ash in the atmosphere also killed off plants. Forests died, so that the fossil record during and after the extinction event contains massive amounts of fungal spores from fungi that decompose trees. Some researchers think all of the world’s trees died. Forests disappeared for some four million years. Since trees absorb carbon dioxide from the atmosphere and release oxygen, the lack of trees made oxygen levels drop even more.

Animals that depended on forests to survive also went extinct, including about two-thirds of all amphibians, reptiles, and therapsids. Therapsids were proto-mammals and it’s a good thing they didn’t all die out because they eventually gave rise to mammals.

Everything I’ve described sounds so incredibly bad, you may be wondering how anything survived. One stroke of luck was probably the size of Pangaea. That was the supercontinent made up of most of the world’s landmasses all smushed together. Before the extinction event, the middle of Pangaea was probably pretty dry with swampier climates around the edges. After the extinction event, the interior of the supercontinent was the safest place to be.

One of the most common land animals after the extinction event was a herbivore called Lystrosaurus. Lystrosaurus was a therapsid, and it was nothing exciting to look at unless you were also a lystrosaurus. Some species were the size of a cat while some were much larger, up to 8 feet long, or 2.5 m. It had a short snout, a short tail, and a semi-sprawling gait. A lizard walks with its legs stuck out to the sides, while a dog or cat or pig walks with its legs underneath its body. Lystrosaurus was somewhere between the two.

It probably lived in burrows that it dug with its strong front legs. While it had a pair of tusks that grew down from the upper jaw, those were its only teeth. Instead it probably had a turtle-like beak that helped it bite off pieces of vegetation.

Lystrosaurus lived in the central part of Pangaea, in what is now Asia, Antarctica, South Africa, and eastern Europe back when all those areas were all scrunched up close together. It survived the extinction event and expanded its range, and for millions of years it was almost the only big land animal in the world. It had almost no predators because they’d all gone extinct, and it had very few competitors for food because they’d all gone extinct. Lystrosaurus made up 90% of all land vertebrates for millions of years.

How did it survive when so many other animals died out? There are several theories, but the most important factor was probably its lack of specialization. It could survive on any kind of plant instead of needing to feed on specific species of plant. There’s also evidence that it could enter a torpor similar to hibernation where its metabolism slowed way down. This would have been a literal lifesaver during the time when the air and water were toxic and very little plant life survived. Lystrosaurus could hunker down in its burrow for long stretches of time, then come out and find enough food and water to keep it going for another stretch of torpor.

Just imagine the world back then, after the initial extinction event but before the world had recovered—say, a million years after the volcanic activity stopped. Picture a series of gentle rolling hills dotted with grazing animals. It’s peaceful and very open because there are no trees. Grass hasn’t evolved yet so the ground is covered in fern-like plants from the genus Dicroidium, which lives in dry conditions. As you look closer with your mind’s eye, you realize that every single one of those grazing animals—thousands of them visible in every direction—are the same kind of animal that looks sort of like a fuzzy pig with a stumpy lizard tail, clawed feet, and a turtle’s beak. Lystrosaurus, living the good life.

In the ocean, the situation was similar. The shallows were toxic waste dumps of ash where the water had so little oxygen that nothing could survive. But the deeper ocean was still livable for some animals.

For a long time, scientists thought a group of early sharks called cladodontomorphs had gone extinct during the great dying. Their distinctive teeth had been common in the fossil record, but after the extinction event they disappeared. Cladodontomorphs only grew about a foot long at most, or 30 cm, and may have had a weird-shaped dorsal fin that pointed forward. They lived in shallow coastal waters. You know, the worst possible place to be 252 million years ago.

Then palaeontologists found some of those teeth in rocks that were in much deeper water 135 million years ago. It turns out the little sharks had survived the extinction event by moving into the open ocean where conditions were better. And they didn’t just survive, they lasted for another 120 million years.

So what animals arose once the recovery was well underway? Icthyosaurs. Archosaurs, which eventually evolved into pterosaurs, crocodilians, dinosaurs, and birds. And therapsids that eventually gave rise to modern mammals.

I don’t usually tease the following week’s show, but next week we’re going to learn about some weird and interesting animals that developed in the early to mid Triassic, after the extinction event was over and life started evolving in new directions. As I’ve said in the previous extinction event episodes: no matter how bad things get, there’s always going to be some little animal stumping along out of the carnage to get on with the business of surviving and thriving.