Thanks to Elaine for suggesting the saola this week!

The saola: rushing to save the most ‘spectacular zoological discovery’ of the 20th century

A saola from a 1999 camera trap (photo taken from link above): 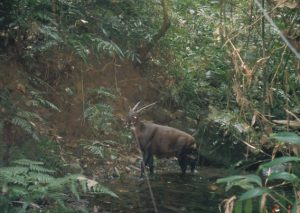 A female saola (named Martha) who unfortunately only survived in captivity a few weeks (photo taken from link above): 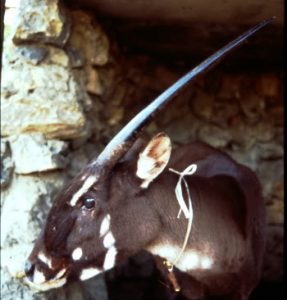 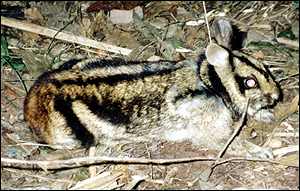 This week’s topic is a remarkable hoofed animal suggested last year by Elaine, the saola, and another remarkable animal I learned about while researching the saola. Both animals are newly discovered by science.

The scientific story of the saola starts in May of 1992. The Southeast Asian country of Vietnam had established a new nature reserve a few years before and wanted to learn more about the kinds of animals and plants living there. A team of scientists surveyed the area and one of the things they found was a skull with horns they didn’t recognize. The horns were long and straight and very close together.

They knew the skull came from an animal new to science, so they tried to find one to see what it looked like alive. But they couldn’t find one. It wasn’t until 1998 that a scientist saw a live saola, a female captured by hunters and kept in captivity until it died a few weeks later.

The saola is an antelope-like bovid that looks a lot like an oryx. We talked about the Arabian oryx in episode 218 and there are other species of oryx that live in parts of Africa. Oryx have long, straight horns that grow side by side too. But genetic analysis of saola remains indicates that the saola is much more closely related to cattle than to oryxes. The saola was described formally in 1993 and placed in its own genus, Pseudoryx, meaning false oryx.

The saola stands about 3 feet tall at the shoulder, or 92 centimeters, and is mostly chocolate brown with white markings on the head and a black stripe down its spine. Both males and females have horns, although males grow longer horns. The horns grow side by side, usually only a few inches apart, or about 8 or 9 centimeters, and are dark brown or black. They grow up to about 20 inches long, or 50 centimeters, and are often about the same distance apart at their tips as they are at the base of the skull. People sometimes call the saola the Asian unicorn because it’s so rare and its horns look sort of like unicorn horns, although they grow back from the skull instead of forward and aren’t spiral shaped. So, not actually very much like unicorn horns.

The saola also has a short tail, slender legs, and a short muzzle, but its tongue is over 6 inches long, or 15 centimeters. It’s rough like a cat’s tongue and it uses it to groom itself, just like a cat, and to help it gather the plants it eats, unlike a cat. It lives in forested mountains and migrates to lower elevations in winter, although its fur is thick and soft to keep it warm in higher elevations. It also has special pores around its eyes that secrete a special fluid it uses to mark plants and rocks the way many antelopes do. Because the saola hasn’t been observed in the wild, we don’t know if it’s marking its territory or just letting other saola know where it is.

The saola is critically endangered, mostly due to poaching. A team of forest guards patrols the park looking for traps that hunters set. Poachers often hunt animals in the park not because the hunters are hungry but because they can make a lot of money selling exotic animals to other countries as so-called medicine. The saola isn’t considered to have any medicinal uses, though, so while a hunter will sometimes kill one to eat, mostly it just gets caught in traps set for other animals. Since it’s so rare to start with, every saola killed in this way could ultimately cause the entire species to go extinct.

Conservationists are working hard to help the saola and its habitat. Logging has been banned in the park and the forest guards are on the lookout for illegal logging activity too. The forestry service is working to educate the local people that the saola only lives in their mountains and nowhere else in the world, which is something for them to be proud of. The park is near the border of another country, Laos, which is also helping with conservation efforts since the saola probably lives there too. You won’t find a saola in any zoos, though, because it doesn’t do well in captivity.

Other animals new to science have been discovered in the park and nearby areas, specifically around the Annamite Mountains along the border of Vietnam and Laos. This includes a new species of rabbit.

In 1996 a biologist named Rob Timmins was looking through a market in Laos when he saw three dead rabbits for sale as food. But these rabbits didn’t resemble any rabbits known from the area. They had short ears, reddish rumps, and dark brown stripes. Stripy rabbits! There is a similar-looking species that lives a thousand miles away, or 1,600 kilometers, in the mountains of Sumatra and Indonesia. The Sumatran striped rabbit is brown with darker brown stripes and blotches, but it’s been known to science since 1880. Timmins was the first scientist to see the Laotian rabbits.

Timmins bought the rabbits, of course, so they could be studied. Genetic studies determined that the rabbits are a distinct species, although it’s closely related to the Sumatran striped rabbit. It was described as a new species in 2000 and camera traps have since taken pictures of it in Vietnam, but we still know very little about it and its cousin in Sumatra.

Both species of striped rabbit are threatened by hunting and habitat loss. Hopefully they can be protected, along with their mountain homes, and a captive breeding program started to ensure their survival. Also, I would like one as a pet.