Thanks to Dean for this week’s suggestion, the crab-eating fox!

The crab-eating fox is not actually a fox: 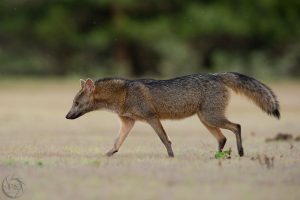 I’m happy to report that I’m feeling healthy and testing negative for covid now. Even my lingering cough has pretty much cleared up! I hope you’re healthy too. Anyway, this week let’s learn about an unusual animal suggested by Dean, the crab-eating fox.

The crab-eating fox lives in parts of South America east of the Andes Mountains. It likes forests and open woodlands, and sometimes lives in savannas too although it prefers areas with a lot of tree cover and rivers. It’s a fairly small animal that rarely weighs more than 18 pounds, or 8 kg, and stands about 16 inches tall at the shoulder, or 40 cm. It has a thick coat that’s mostly gray or brown with reddish ears and paws, black markings on the ears, tail, and legs, and a black stripe down its spine. It also has a bushy tail and a relatively short muzzle.

There are two important questions we need to answer about the crab-eating fox. First, does it actually eat crabs? Second, is it actually a fox?

The crab-eating fox does indeed eat crabs, although it’s an omnivore and will eat pretty much anything it can find. This includes insects, eggs, fruit, carrion, and small animals of various kinds, especially rodents. But during the wet season, when it rains a whole lot and rivers flood and ebb repeatedly, the crab-eating fox eats a whole lot of crabs and other crustaceans.

The crab-eating fox is not, in fact, a fox. It’s definitely related to foxes, since it’s a canid and the family Canidae includes foxes as well as wolves, dogs, coyotes, and all their relations, and it looks like a fox. It’s the only member of its own genus, but it’s grouped together with some other South American canids that look like foxes but are more closely related to wolves. But they’re not all that closely related to either foxes or wolves. Another member of this group is the maned wolf, the one with super long legs, which we talked about most recently in episode 167.

The crab-eating fox is nocturnal and spends most of the daytime sleeping in a den. Sometimes it makes a den by burrowing into thick grass, sometimes it will dig a burrow, but it prefers to find a den made by another animal and move into it if it’s empty. It may have several dens in its territory, which it often shares with its mate. Both parents help take care of the babies, and a female may have two litters a year.

I’m happy to report that the crab-eating fox is not endangered. It’s doing just fine in most places. It’s an adaptable, intelligent animal, which helps it thrive in a changing environment the same way coyotes do in North America. In fact, it fills the same ecological niche in South America that the coyote fills in North America, and this has led to a really weird potential problem.

The crab-eating fox is native to South America, but it has been spreading northward into Central America. Likewise, the coyote is native to North America, but it has been spreading southward into Central America. Neither species likes thick forested areas, but as more rainforests are cleared for agriculture and housing, people have inadvertently made a sort of corridor for both species. Having people around doesn’t bother either the crab-eating fox or the coyote. Coyotes have made it as far south as Panama, almost to South America.

If this continues, with crab-eating foxes migrating north and coyotes migrating south in ever greater numbers, eventually they’ll start to compete with each other. This isn’t good for either of them.

The only thing stopping coyotes from migrating farther south at this point is a thick strip of tropical forest called Darien National Park in Panama, where jaguars live. Unlike coyotes and crab-eating foxes, jaguars are very shy of humans and need a lot of dense forest to live in. This is exactly the kind of place that coyotes and crab-eating foxes like least, not to mention that a jaguar would be more than happy to catch and eat either species of canid. So as long as the forest in the national park remains intact, it acts as a barrier to keep both canid species apart, and that’s good. It’s also good for the jaguars and lots of other animals. Hooray for protected forests!