Thanks to Llewelly for this suggestion, and thanks to Dr. Thomas A. Hegna for providing me with the two papers I reference in this episode!

Images are taken from the papers. 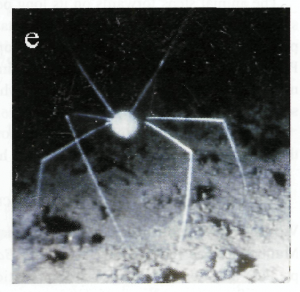 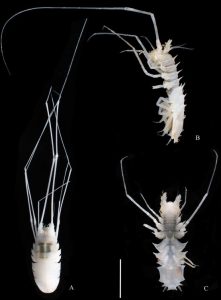 My carefully planned out episode schedule has already gotten messed up, but I got excited about this topic and couldn’t wait to share it! It’s a mystery invertebrate from the deep sea that has been solved! Thanks to Llewelly for bringing this to my attention, and thanks to arthropod paleontologist Dr. Thomas A. Hegna for posting this information on Mastodon in the first place, and for providing the relevant papers to me. People are pretty great.

I knew about this topic from the book The Search for the Last Undiscovered Animals by Karl Shuker, but I hadn’t been able to find out more. Until now.

In the late 1980s, a program called DISCOL 1 was launched to study disturbances on the sea floor due to underwater mining. It focused on the deep sea in the South Pacific. One of the things the expedition did was drop underwater cameras with bait tied to them. When an animal came to investigate the bait, the camera took pictures. I have a birdfeeder like this now although I don’t have to drop it anywhere.

In February 1989, the camera descended to about 13,600 feet, or 4,150 meters, in the Peru basin. When it was hauled up a few days later and the pictures retrieved, the scientists saw something they didn’t recognize on 20 of the photos. It looked like a spider.

The scientists were able to get a good idea of the animal’s size because they knew how big the bait was and how big the metal rod was that the bait was tied to. The animal’s body was about 2 and a half inches long, or 6 cm, and about half that width, not counting its long, jointed legs. It had five pairs of appendages, including three pairs of walking legs. The other two pairs of appendages were longer and might be feelers of some kind, with the front pair possibly used to manipulate food. The estimated legspan was almost 8 inches across, or more than 20 cm.

The scientists published a short article about the finding later in 1989 and proposed that the animal be tentatively placed in the phylum Arachnida with spiders and their relations. But this placement is a big deal, because there are no known spider relations that live in deep water. Some spiders have evolved to live in water at least part of the time, but they always have to have access to the air.

For a long time that’s all anyone knew. Most scientists thought the animal was probably a pycnogonid [pik-NA-gunid], an arthropod commonly called a sea spider although it’s not actually an arachnid. We talked about sea spiders in episode 105, so I’ll revisit some of the information from that episode.

Sea spiders live throughout the world’s oceans and there are well over a thousand known species. Most are small and live in shallow water, but a few live in water up to 23,000 feet deep, or 7,000 meters. The biggest species live in the cold waters around Antarctica, with the very largest individual ever found having a legspan of about 27 inches across, or 70 cm.

The sea spider has four pairs of legs, although a few species have five or six pairs of legs instead. Some species have one or two pairs of simple eyes, but other species have no eyes at all. The body is quite small in relation to the legs, which are extremely long, which means the digestive tract is actually partly in the legs, because the body is too small for it. It walks along the bottom of the ocean or may swim by pulsing its long legs like a jellyfish with legs instead of a bell. In species that swim, the legs may be lined with long bristles.

Some species have mouthparts, but most eat using a proboscis that it uses to suck fluids out of its prey. Some species have spines at the tip of the proboscis. It sticks its proboscis into a sponge, worm, jelly, sea anemone, or other invertebrate, injects digestive fluids that liquefy the surrounding tissues, and slurps the fluids up. Sometimes this kills the prey animal, sometimes it doesn’t.

All this does sound a lot like the spider-like animal photographed in 1989. But in 2004 a new paper was published about the animal, where the original scientists teamed with some other experts to re-examine the photographs. Their conclusion is that the mystery animal wasn’t a spider or a sea spider but something else: a munnopsidid isopod.

Isopods are crustaceans that have been around for at least 300 million years. They live all over the world, on land and in both fresh water and in the ocean. The animal sometimes called the woodlouse or pill bug or roly-poly or sow bug are actually isopods. All isopods have segmented exoskeletons, as you may have seen in roly-polies or whatever you call those little guys, and all have two pairs of antennae and seven pairs of jointed legs.

Isopods are very common animals in the ocean and the most common isopods are members of the family Munnopsidae. Most have short legs but some have long legs, including some species in the subfamily Bathyopsurinae.