This week we look at three strange birds: a red-tailed Canadian raven that may or may not exist, the pied-billed grebe that definitely does, and New Zealand’s takahē.

A common raven. No red markings: 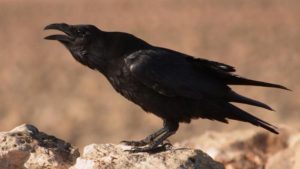 Here’s the Cryptodominion page with the red-tailed raven report.

Precious smol baby pied-billed grebes riding on their mom or dad’s back: 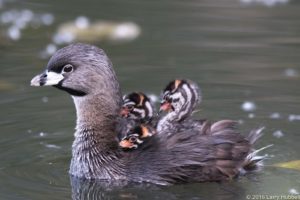 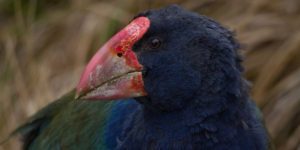 For this week’s episode we’ll look at three unusual birds, because birds are awesome. This is a re-record to improve audio quality and bring some information up to date.

It may be a tall tale, but a big red-tailed raven supposedly living in remote areas of British Columbia, Canada sounds oddly plausible. Loggers report that there’s a particular valley where huge ravens exist. They’re bigger than golden eagles but otherwise look like ordinary ravens except for their tails, which are reddish. They’re also nearly flightless. The loggers say the birds can be dangerous and will tear up campsites.

The only known raven found in Canada is the common raven. It’s much bigger and heavier than the crow, over two feet long, or 61 cm, including the tail, with a wingspan of over four feet, or 1.2 meters. The golden eagle, in contrast, can have a wingspan of nearly eight feet, or 2.4 meters, although the body length is not much more that of a raven’s.

The common raven is an intelligent, curious bird, black all over with a purplish sheen in the right light. It’s omnivorous and is happy to eat roadkill, food scraps found in unsecured garbage cans, and the eggs and hatchlings of other birds.

So could there be an unknown raven in British Columbia? I dug around online to see if I could find more details. In fact, I checked Allaboutbirds.com first since that’s a really good resource about North American birds. I wanted to see if there are any corvid species in North America that have red markings, but there aren’t. The only corvid in the world with red markings is the blue magpie, which has a rusty red head and wings. It’s a lovely bird, but it lives in Sri Lanka, and anyway its tail is blue.

I couldn’t find much online at all about the red-tailed raven story. It first appeared in 2012 or shortly before on a site called Cryptodominion. I’ll read the entry in its entirety, since it’s very short.

“British Columbian giant raven (Interior of B.C. NA): A piece of local folklore, the bush mechanics who worked in the interior of B.C. claim that here is a valley, rich in timber, which is populated by enormous raverns bigger than golden eagles. They say these ravens are dangerous animals, very opportunistic, and will not hesitate to tear someones camp apart. they are nearly flightless, and have much red in their tail plumage. These are obviously a specialized species of raven which developed in the isolation of this valley. However, if any introduced predators like dogs or cats make it there these ravens might become threatened.”

I learned about this story from zoologist Karl Shuker’s blog, Shukernature. He says that in 2012 a French reader emailed him asking him if he’d seen the entry and if he knew anything about the bird. He had never heard of the story before. Also in 2012, “The Corvid Enthusiast” posted about the Cryptodominion entry on an unexplained mysteries forum, asking if anyone in British Columbia had heard the story. One person did indicate they’d heard of it but gave no details, so I’m a bit skeptical of that reply. Responses from a few people from British Columbia indicate that the area is too populated and well explored to have any isolated valleys.

British Columbia is an enormous region, from the Pacific coast to the Rocky Mountains, from Vancouver’s mild climate to a northern border with the Yukon. The original entry says the valley is found in the interior of the British Columbia, which I take to mean as not coastal or on an island. I have absolutely no doubt there are pockets of wilderness in B.C. where any number of mystery birds might live.

So do I believe the red-tailed raven is a real bird? No. I think someone planted that story to see how far it would go. But if anyone wants to fund a birding expedition to British Columbia to look for the raven, I am standing by with my binoculars in one hand and my passport in the other.

Our second bird also lives in North America, although it’s just as common in South America and shows up occasionally in Europe and other places. The pied-billed grebe, also called a dabchick, isn’t an especially strange bird, but I’m including it just because I love it. I see them frequently while birding, especially in winter, and they’re so small and brownish-yellow that I frequently mistake them for ducklings at first glance.

They’re about a foot long from bill to tail, or 30 cm, but they sit so low in the water they look smaller. Actually they don’t even really have a tail. They just have some tufty feathers on their hind end.

Grebes aren’t ducks, although they do spend most of their time on the water. They don’t have webbed toes like ducks do. Instead, they have lobed toes but you probably won’t ever see them because grebes don’t like to get out of the water. Their legs are set so far back on their bodies that they don’t balance well while walking. If they have to, they’ll fly, but again, they’d rather just stay on the water. Some populations migrate, especially if they live where ponds freeze in winter, but populations in more temperate climates stay year-round.

They prefer freshwater ponds and small lakes with plenty of cover, like cattails, reeds, and other vegetation. They’re diving waterfowl, which means they spend a lot of time underwater, catching fish, frogs, insects, and crustaceans like crawdads, which they crush with their blunt bills. They also eat their own feathers. That sounds weird, but it’s actually something all grebes do. They even feed feathers to their babies. The feathers help keep pieces of bone or shell from traveling from the stomach to the intestines. Instead, the feathers and hard pieces of non-food form pellets which the bird horks up safely.

Baby grebes are the smallest of the small. They can’t swim right away like ducklings can, which you’d think would be a problem since grebes build floating nests on vegetation. But (you’ll love this) they ride around on their parents’ backs for a few weeks until they learn to swim on their own.

Oh, and the most interesting thing about the pied-billed grebe? It can sink. The first time I saw this happen, I really didn’t believe my eyes. I was birding along the edge of a slow-moving river, looked down at the water through the trees, and saw two tiny duck-like birds which promptly vanished into the water as though they’d been abducted by a submerged alien. One second they were there, the next they were literally just gone. The pied-billed grebe does this by trapping water in its feathers, which gives it incredible control over how far down it sinks and may also reduce drag while it swims underwater.

Now let’s talk about another bird, this one halfway around the world, definitely real, and completely flightless. The takahe was a chicken-sized bird with a greenish back, iridescent purple head and neck, and heavy red bill and legs. It lived in New Zealand’s swamps and grasslands. The white settlers introduced red deer, cats, ferrets, stoats, hunting for sport, and all the usual things. In 1898 four birds were caught…and that’s the last anyone saw of the takahe.

Of course there were rumors that the birds survived. There always are. But as with so many other animals driven to extinction by habitat loss, hunting, and introduced animals, hope for a surviving population of takahe gets smaller every year.

I’ve just been handed a piece of paper by my research assistant, who I just now invented. It says here that the takahe was discovered alive and well in the Murchison Mountains on November 20, 1948!

The takahe now lives in the Murchison Mountains and on five small islands, chosen as habitats because they’re free from predators. The birds mate for life and breed slowly, but they can live up to 25 years in captivity. They mostly eats seeds, insects, and the tender parts of grass stems, but one bird was caught eating a duckling. I like to imagine it wore a really guilty expression while chowing down.

Takahe chicks are fuzzy and gray with yellowish legs. The adults are about 20 inches tall, or 50 cm.

For a long time it wasn’t clear if the birds would even survive. In 1981 there were only 118 known individuals. The population now stands at over 400 with a careful breeding program in place to keep the species as genetically diverse as possible. When I first put together this episode in spring of 2017, there were only just over 300 takahes, so that’s a big improvement in only three years.

There’s not a lot more to say about the takahe. I’m just really happy that sometimes there are persistent rumors about an extinct species’ survival because it really has survived. Stay strong, takahe. Eat ducklings if you have to.