New information came out today about the infamous Ozenkadnook Tiger photo! Here’s all the breaking news! 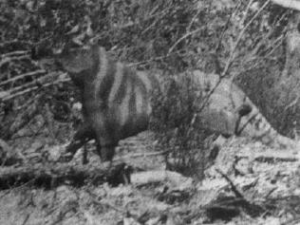 Someone please tell me how to pronounce Ozenkadnook.

The Ozenkadnook Tiger Photo Revealed as a Hoax

Is the Ozenkadnook Tiger a Cardboard Cryptid?

It’s a Strange Animals Podcast special! I have breaking news and want to get it out to everyone now rather than wait to include it in a full episode a few weeks down the line.

I’d never heard of the Ozenkadnook tiger until today, but I follow zoologist Darren Naish on Twitter and this morning he tweeted, “Suspicion confirmed! As I hinted in 2016, Rilla Martin’s Ozenkadnook tiger photo was a hoax.” He attached a photo to a column in an Australian newspaper.

Here’s the story as it stands, or stood until today, anyway. In 1964 in western Victoria, Australia, Rilla Martin took a black and white photo of a striped animal with her Brownie box camera. As she told reporters later, she’d been visiting her cousin, Graham Martin, in Goroke and was driving along a dirt road near Ozenkadnook, presumably on her way home. Her camera was on the seat beside her since she’d been taking pictures of her cousin earlier. When she noticed an unusual animal near the edge of the road, she stopped the car and took a photo right before it ran away.

It’s not clear how the photo got into the newspapers. Stories vary. Either Martin took it to the local paper herself or she sent a copy to her cousin and he took it to the paper. Either way, it caused a brief sensation and has been debated ever since.

The original photograph and negative was lost long ago. The picture we have these days is a scan of the newspaper article, which is why it looks pixelated. When I first saw it, I assumed it had been taken through a window screen, but that’s just an artefact of how newspapers printed photos back then.

There’s a copy of the picture in the show notes. It shows a long-bodied animal, doglike but with short legs, a long tail, and erect ears. The neck is thick, the chest deep. The lower legs and paws are hidden behind brush and a dead log. The animal’s forebody is dark with broad pale stripes, while the haunches are pale without stripes and the tail is pale with thin ringed stripes.

In some ways it looks similar to a thylacine, which you might remember from episode one. Martin herself said that the animal was about the size of a dog, specifically a Labrador, and it had a piglike snout.

My first thought on seeing the photo was that it was a fakey-fake-fake. The stripes look painted, the eye definitely looks painted. In a 2010 blog post, Darren Naish noted a structure just visible in front of the hind limbs that he thinks might be a support of some kind for an animal cut-out.

Suggestions as to what the animal might be include a marsupial lion or a thylacine, both most likely extinct, or a hoax. Thylacine sightings had been made in the area before the photo was taken, which is why the photo is usually referred to as the Ozenkadnook tiger. That’s what the locals called the mystery animal they’d seen.

Then today, March 24, 2017, a column appeared in the Weekend Australian. The paper’s editorial cartoonist, Bill Leak, died on March 10, and the column is a tribute to him. It’s mostly a reminiscence of the ongoing battle of practical jokes between Leak and another cartoonist, but it mentions an interesting event in the 1960s. Leak’s father and a friend were aware of the thylacine sightings near Goroke. One day they cut a thylacine-shaped animal out of cardboard, painted it, and propped it up in the scrub to take a picture.

It was only meant to be a joke among friends, according to the column, but the photo made its way to the papers. Bill Leak was quite young at the time and remembered his father told him he must never reveal the prank to anyone. Leak kept the secret until his father’s death.

That’s all the column says about the hoax. I hit a paywall with the Australian every time I tried to read Leak’s obituary. I love my listeners, but not enough to pay $4 to read an obituary that likely wouldn’t have told me anything Wikipedia couldn’t. Bill Leak was born in January 1956, so he would have been around eight when the photo was taken. His father was apparently named Reg Leak, but Wikipedia’s citation linked to the Australian article was, you guessed it, behind a paywall. An AusLit biography of Leak is also behind a paywall. Googling “Reg Leak” gets me a lot of information about leaking radiators and what I should do about them.

Googling Rilla Martin brings up umpteen near-identical articles about the photo, but nothing about the woman who took it. According to the articles, Martin was from Melbourne. The only mention I could find of a Rilla Martin from Melbourne was in a 1946 wedding announcement in the Argus, which mentions a flower girl named Rilla Martin. It’s not that I don’t believe Martin exists, I just wanted to tie her to Bill Leak’s father, but I’ve had no luck. (I was also at work, so I didn’t have time to do as much as I should have.)

Bill Leak was a known practical joker. This can cut both ways in this situation. On the one hand, he might have invented the story about the cardboard thylacine to see if anyone would believe him. On the other hand, it might have shaken out just as he said and people around him remembered it as just another goofy thing that Bill was involved in.

Here’s another point in favor of the story being true. If the animal is a fake, and I personally think it is, it took a great deal of artistic skill to make it look so realistic. Bill Leak was an artist and it’s quite possible his father was too.

That’s all I have for the moment. With luck I can get this extra episode uploaded tonight. If you have any comments, or if you can dig up a connection between Reg Leak and Rilla Martin, drop me an email at strangeanimalspodcast@gmail.com. This has been your host, Kate Shaw, bringing you all the hot takes in the world of cryptozoology.