This week’s episode is a collection of strange animal sounds, some unknown, others identified. We start with “the loneliest whale.”

A blue whale. Not the loneliest whale, as far as anyone knows. 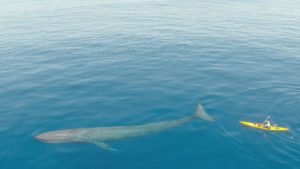 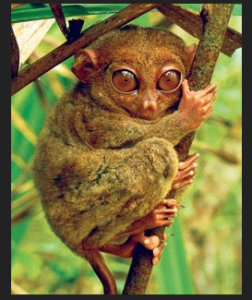 This fox can see into your soul and does not like you: 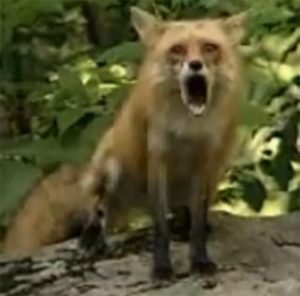 One of the great things about making my own podcast is that I’m the one who gets to decide what topics to cover. I love podcasts about unexplained sounds captured on audio, so this week’s episode is just that.

With one or two exceptions, I’ve tried to keep to sounds that are definitely or probably made by animals. I’ve also tried to dig a little deeper to explore some sounds that I haven’t heard covered in other podcasts. I waded through a million pop-up ads so you don’t have to.

First, let’s talk about a whale you’ve probably heard of. It’s frequently called the loneliest whale. The story goes that this whale is lonely because its voice is too high to be heard or understood by other whales. It calls but never gets a response.

But that’s actually not the case. Its voice is higher than other blue whales, fin whales, and humpback whales, but they can certainly hear it, and for all we know, they answer. Since the individual whale hasn’t actually been spotted, we don’t know if it travels alone or with other whales.

The loneliest whale was first detected in 1989 by the US Navy listening for submarines in the North Pacific, then again in 1990 and 1991. At that time the recordings were classified due to the cold war, but in 1992, some were partially declassified, and word about the whale got out. The calls vary but are similar to blue whale calls. The main difference is the voice’s pitch. The loneliest whale calls at 52 hertz. That’s slightly higher than the lowest notes on a piano or tuba. Blue whale songs are typically around 10 to 40 hertz. The whale’s voice has deepened over the years to around 49 hertz, suggesting that it has matured.

Suggestions as to why this whale has a different call include the possibility that the whale is deaf, that it’s malformed in some way, or that it’s a hybrid of two different species of whale. Fin whales and blue whales do interbreed occasionally, but no one has successfully recorded a hybrid’s calls.

Whale researchers think the recordings seem to be of one individual whale, but in 2010, sensors off the coast of California picked up lonely whale type calls that might have been made by more than one whale at the same time. One suggestion is that blue and fin whale hybrids might be common enough that they band together. This seems a little far-fetched to me, but I’m not a whale expert.

The loneliest whale’s migratory patterns suggest it’s a blue whale. So do its call patterns, if not its actual voice, but no one has recorded the whale’s song since 2004.

A documentary called “52: The Search for the Loneliest Whale” is currently in production. There aren’t any dates listed on the official site, 52thesearch.com, but it’s supposed to be released some time this year, 2017. [Note from 2020: it doesn’t appear that this has ever been released.] The film’s expedition has concluded, although we don’t know yet whether the scientific and film teams actually identified the loneliest whale or recorded it.

Here is the call of the loneliest whale. This recording has been sped up 10x to make it easier to hear. The original recording is barely more than a rumble, depending on how good your hearing is and how good your speakers are.

And just for fun, here’s a recording of an ordinary blue whale, also sped up:

Now let’s go from the largest mammal alive to one of the largest land mammals alive, the elephant. In 1984, biologist Katy Payne, a pioneer in the field of bioacoutics, was at a zoo in Portland, Oregon to give a talk about whale songs. While she was there, she visited the elephant exhibit and noticed that every so often she felt what she called a throbbing in the air. She got some recording equipment and came back to the zoo, recorded the elephants, and sped up her recording. Sure enough, the elephants were making sounds below 20 hertz.

She pursued the finding with wild elephants in Africa. It turns out that elephants communicate not only with the familiar trumpets and squeaks, but in infrasound—that is, sounds below the lower limits of human hearing.

Infrasound can travel a long distance, especially useful in forested areas with limited visibility, and at dusk and dawn when atmospheric conditions help propagate the sound waves so they can travel as far as six miles away [9.6 km]. Females in estrus make a special call to bull elephants, for instance, attracting potential mates from a long way away.

Here’s a recording of elephant rumbles—again, sped up so we can hear it:

The Philippine tarsier is a tiny primate only about five inches tall [13 cm], a big-eyed nocturnal fluffball with long fingers. Researchers studying the tarsiers wondered why the animals frequently opened their mouths as though to make calls but produced no sound. Sure enough, they’re communicating at ranges far too high for humans to detect—higher, in fact, than has been discovered for any terrestrial mammal.

The Philippine tarsier most often communicates at 70 kHz and can hear sounds up to 90 kHz. Researchers think the tarsier uses its ultrasonic hearing to track insects, and communicates in frequencies too high for predators to hear. Here’s a tarsier call, slowed down so we can hear it. I’ll keep it short because it’s super annoying.

Another animal that uses ultrasound is the cat. Domestic cats can hear sounds up to 85 kHz. Some kitten calls fall in the ultrasonic range, so the mother cat can hear her babies but many predators can’t. Cats have evolved to hear such high sounds because many rodents communicate in ultrasound. Male mice, for instance, sing like birds to attract mates. Here’s an example, slowed down so we can hear it:

But so far these are all known animals, or in the case of the loneliest whale, probably known. What about truly mysterious sounds?

Probably the most famous mystery sound is the bloop. It was recorded by NOAA in 1997 off the tip of South America. It’s an incredibly loud sound, much louder than the loudest animal ever recorded, the blue whale, and for a long time, people speculated that it might be an enormous unknown animal. Unfortunately, or maybe fortunately because no one wants to awaken Cthulhu, NOAA has identified the bloop as the sound of an icequake. That is, massive iceburgs breaking apart. Here’s a clip of the bloop, sped up so we can hear it:

Another solved mystery sound has been dubbed “bioduck,” since it sounds sort of like a robotic duck. It’s been recorded since the 1960s, when it was first reported by submarine operators in the southern ocean off the Antarctic. It’s common, heard almost year-round near Antarctica and Australia, and was not from any known human-made source. Then, in 2013, whale researchers attached suction-cup tags to two Antarctic minke whales. While the tags remained in place, they recorded not only where the whales went, but the sounds they made. And to the research team’s astonishment, both whales made bioduck calls. This finding is important, not just because it cleared up a longstanding mystery, but because it tells us a lot about the Antarctic minke whale that wasn’t known. Researchers thought the whales only lived in Antarctic waters part of the year. Now they know that some whales remain year-round while some migrate near Australia. They can also make better estimates of whale populations now that they can identify this distinctive call.

The Antarctic minke whale is a baleen whale that grows to around 40 feet [12 m], but usually much smaller. It’s gray with white belly and mostly eats krill. This is what they sound like:

In our sea monster episode a couple of weeks ago, I shared another baleen whale call, this one from an unidentified species. It’s been dubbed the bio-twang and has been recorded in the Mariana trench in the western Pacific year-round in 2014 and 2015. Researchers suspect the dwarf minke whale, but they don’t know yet.

To get out of the water for a moment, in 2012 a supposed bigfoot recorded started going around the internet. It was supposedly recorded on a cell phone in the Umatilla Indian Reservation near Pendleton, Oregon. It’s more likely to be nothing more exotic than a red fox.

And here’s a recording of a red fox:

In 2014, an unknown animal was recorded in Lake Champlain in Vermont. Dennis Hall, who claimed to have spotted the lake monster known as Champ in 1985, and Katy Elizabeth, who runs an organization known as Champ Search, made the recording and thought it might be from a beluga whale.

But while Lake Champlain is connected to the ocean, a whale would have a hard time reaching the lake due to canals, and would most likely have been spotted either on its way to the lake or once it arrived. Certainly it would have been spotted once it died from trying to live in fresh water.

Other recordings of clicking and squeaking sounds like those of beluga whales have been recorded in the lake in the past, including by a Discovery Channel team researching Champ. In 2013, Dr. Lance Barret Lennard from the Vancouver Aquarium Marine Science Center, and an expert on whale acoustics, examined some of the echolocation patterns. He determined that not only are the recordings not of beluga whales, they’re not from any kind of whale. They’re probably not mammalian in origin.

Some turtles have been found to produce underwater signals that may be a form of echolocation, and many fish make clicking and drumming sounds. But we don’t know what’s making the sounds recorded in Lake Champlain.

Finally, here’s a sound that’s not mysterious, I just really like it. It’s the song of the veery, an attractive but rather plain thrush. I’ve heard it in person while hiking at high elevations in the Smoky Mountains, and it’s completely ethereal.

If you listen closely, you can hear that the veery is actually making two sounds at the same time. The avian vocal mechanism, called a syrinx, is much different from a mammal’s larynx, and allows a bird to product more than one tone at a time.