This week’s episode is all about some awesome sharks: the hammerhead shark, which used to scare the poop out of me when I was a kid, and the unbelievably huge but fortunately for all the whales extinct megalodon! Thanks to Zenger from Zeng This! for recommending such a great topic!

The great hammerhead, a huge and freaky-looking shark. 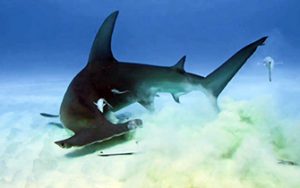 A ray leaping out of the water to escape a hammerhead. The article I pulled this from is here. 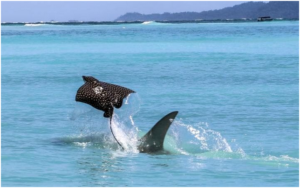 A guy with a teeny adorable bonnethead, a newly discovered species of hammerhead. 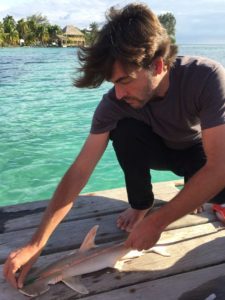 Hello there. I am a great white shark. 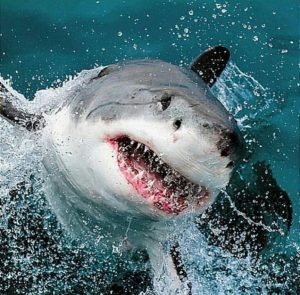 This week’s episode was suggested by Zenger from the fun pop culture podcast Zeng This!, which I recommend if you don’t already subscribe. He suggested megalodon as a topic, so since I was already researching hammerhead sharks, I decided to put together a shark episode.

There are a lot of species of hammerhead shark, some of them small like the new species of bonnethead discovered earlier this year that’s only about as long as your forearm, and some of them huge, like the great hammerhead, which can grow up to 20 feet long [6 meters]. One of the biggest sharks ever caught was a great hammerhead. At fourteen feet long [4.2 meters], it wasn’t the longest shark ever, but it weighed 1,280 pounds [580 kg]. It was caught in 2006 off the coast of Florida.

If it weren’t for its weird head shape, the hammerhead wouldn’t seem all that interesting. It’s mostly plain gray in color, hardly ever attack humans, and is common all over the world. But they’ve got that head! The shape is called cephalofoil, and not only are the shark’s eyes on the end of the stalks, the head is flattened.

Researchers think the shape serves two purposes. A hammerhead shark can see really well since its eyes are so far apart, and the shape actually provides a certain amount of lift when water flows over it, like an airplane’s wing, which helps the shark maneuver. Plus, of course, a wide head allows for even more electroreceptor cells so the shark can sense prey better.

Hammerheads have relatively small mouths compared to many other sharks. They do a lot of feeding on the ocean floor, snapping up rays, fish, crustaceans, octopus, even other sharks. Oh yeah, and a hammerhead will actually use its head as a weapon. Hammerheads like eating stingrays and will pin one to the ocean floor with its head to keep it from escaping until the shark can bite it. In February of 2017, tourists surfing near Panama saw a spotted eagle ray escape a hammerhead shark by leaping out of the water like a bird. The stingray actually beached itself on an island, too far up the beach for the shark to reach. After it gave up, the ray managed to catch a wave that carried it back out to sea. That’s pretty epic.

Hammerhead sharks are considered a delicacy in many countries, but since their fins are the most valuable part of the fish, fishermen sometimes catch a shark, cut its fins off, and toss the still-living shark back in the ocean. It always dies, because it can’t swim without fins. The practice is horrific and banned in many countries. Overfishing has also threatened many hammerhead species. Researchers estimate that the great hammerhead in particular has decreased in numbers some 80% in the last 25 years.

Ironically, recent studies have found repeatedly that shark fins and meat contain high levels of mercury and a neurotoxin called BMAA, which is linked to neurodegenerative diseases in humans. The frequent eating of shark fin soup and other dishes made of shark meat, and cartilage pills which some people take as a diet supplement, may increase the risk of developing diseases like Alzheimer’s and Lou Gehrig’s disease. (I ate shark once, a shark steak. It was terrible.)

You may think a 20-foot hammerhead is a really big shark, and it is. Great white sharks aren’t much bigger. But before the great white and the hammerhead, a 60 foot [18 meter] shark ruled the oceans. Megalodon is first found in the fossil record around 23 million years ago, and died out about 2 ½ million years ago. Because shark skeletons are made of cartilage instead of bone, they don’t fossilize well. We have a whole lot of megalodon teeth, but except for some vertebrae we don’t know much about the rest of the shark.

Researchers generally compare megalodon with the great white, since while they’re not necessarily closely related, they occupy the same ecological niche. We do know how the teeth were arranged, since associated teeth in formation as they had been in the jaw, although the jaw itself wasn’t preserved, have been discovered in North Carolina and Japan.

At a rough estimate, megalodon probably grew 60 or even 70 feet long [18 to 21 m]. Its jaws were over six feet across [1.8 meters] with some 276 teeth in five rows. Due to the size of its teeth and jaws, it probably mostly preyed on large whales, and was probably a lot blockier looking than the great white. If the great white is a racecar, megalodon was that bus from Speed.

Some researchers want to classify megalodon as a close relative of the great white shark, which has serrated teeth like megalodon’s. But others argue the great white is more closely related to the mako shark, which does not have serrated teeth. For a long time the megalodon hypothesis was more accepted, but a study published in the March 12, 2009 issue of Journal of Vertebrate Paleontology concluded that mako sharks and great whites probably share a recently discovered fossilized ancestor some 4 to 5 million years old. Its teeth have coarse serrations, which researchers think are a transitional point between no serrations and the serrations in modern great white shark teeth. The similarities between the great white and megalodon are due to convergent evolution.

This points to something many people don’t understand about science. It’s messy. It’s incomplete. Our collective body of knowledge is being added to, adjusted, reinterpreted, and hopefully corrected all the time. From the outside it can look like people arguing over ridiculous minutiae, or a bunch of eggheads who can’t make up their minds. In reality, as new information is added to what we know, what we used to think was true has to be changed to fit new facts. It’s exciting!

For a long time researchers though megalodon died out around the beginning of the Pleistocene because the world grew colder as the world entered into the ice ages. New findings suggest that climate change didn’t push the megalodon into extinction, other sharks did. Newcomers like the great white and the orca, which of course isn’t a shark but a whale, starting expanding into new territory, out-competing megalodon around the same time that a lot of marine mammals were also going extinct. Megalodon needed a lot of food to survive—more than the much smaller upstarts.

Back when megalodon was king, though, there was plenty of food to go around. It wasn’t even the only mega-predator hunting the oceans. In 2008, fossils of an ancestor of today’s sperm whale were discovered in Miocene beds dated to around 12 or 13 million years ago. The whale has been dubbed Livyatan melvillei and estimates of its length, from the partial skull, lower jaw, and teeth that were found is around 57 feet [17 meters]. Since modern sperm whales are frequently some 60 feet long [18 m] and 80-foot [24 m] monster males were reported in the past, it’s possible the newly discovered Leviathan could attain similar lengths. Its biggest teeth were two feet long [61 cm] compared to modern sperm whales’ 8-inch teeth [20.5 cm]. It also apparently had teeth in its upper jaw as well as its lower. The sperm whale only has teeth in its lower jaw, and since it mostly eats squid, it doesn’t really need teeth at all. Individuals who have lost their teeth survive just fine.

The Leviathan, though, used its teeth. Like megalodon, it may have preyed on baleen whales. Megalodon teeth were found in the same fossil deposits where the Leviathan was discovered. I bet they battled sometimes.

So how do we know Megalodon isn’t still around, cruising the oceans in search of whales? After all the megamouth shark was only discovered in 1976 and it’s almost 20 feet long [6 m]. Well, we have two big clues that there isn’t a population of Megalodon sharks still living. Both involve its teeth.

Sharks have a lot of teeth, and they lose them all the time as new teeth grow in. Shark teeth are among the most common fossils around, and any dedicated beachcomber can find shark teeth washed up on shore. If megalodon still lived, we’d be finding its teeth. We’d also probably be finding whales and other large marine animals with scars from shark attacks, the way we find scars on sperm whales from giant squid suckers.

Wait, you may be saying, no one was talking about megamouth shark teeth found on beaches before it was discovered. Well, megamouth sharks have tiny, tiny teeth that they don’t even use. They gather food with gill rakes that filter krill from the water. Megalodon teeth can be seven inches long [18 cm]. Great white teeth are only two inches long [5 cm]. Occasionally a fossilized megalodon tooth washes up on shore, and when it does, it makes the news.

So okay, you might be saying, you fractious person you, what if megalodon survived into modern times but has died out now. Well, we’d probably still know. Not only would the non-fossilized teeth still be found, since nothing is going to eat them and they don’t decay readily, but a lot of cultures have incorporated shark teeth into weapons over the centuries. A seven-inch serrated tooth is a weapon worth having.

Consider the Gilbert Islands in the Pacific. Sharks were important in the Kiribati culture there, and the people crafted amazing weapons with shark teeth. Anthropologists studying the weapons discovered that some of the teeth used in older weapons come from sharks that are now extinct in the area.

So no, I’m going to insist that whatever you saw on Shark Week, megalodon is not out there and hasn’t been for a couple of million years. But what about other mystery sharks?

There aren’t very many reports, surprisingly. Even Karl Shuker comes up empty, with just one mention of a reportedly hundred-foot [30 m] shark called the Lord of the Deep by Polynesian fishermen, but I can’t find any additional information about it.

That doesn’t mean there aren’t mystery sharks out there, of course, just that they’re probably not gigantic or radically different from known shark species. In fact, new sharks are discovered all the time. In just the last few months, a three-foot [1 m] ghost shark with rabbit-like teeth, and a tiny hammerhead called a bonnethead have been described. And yeah, I’d love to be wrong about the megalodon’s existence.

Researchers are studying the genetics of sharks’ rapid healing, which could have important medical applications for humans. A recent study published in the January 2017 BMC Genomics Journal provides evidence that the genes linked to the immune system in sharks and rays have evolved in ways that their counterparts in humans have not. One gene is involved in killing cells after a certain amount of time, which is something cancer cells manage to avoid. It’s possible that as researchers learn more, new therapies for treating cancer in humans could be developed.

So maybe we should stop eating so many sharks. Shark meat isn’t good for you anyway.