This week’s episode is about two solved mysteries that aren’t exactly solved after all, the water owl and the devil bird! Let’s figure out what those two might really be!

A swordfish, swording everywhere it goes: 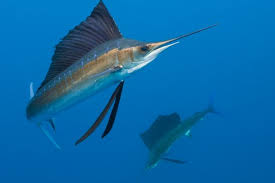 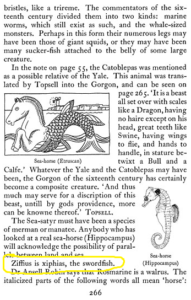 A possible culprit for the devil bird, the spot-bellied eagle owl: 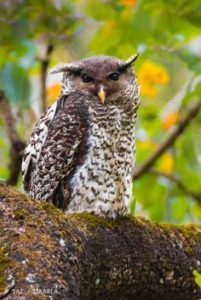 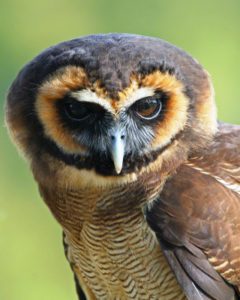 I got my air conditioning fixed, so you’ll be happy to know I’m not sitting in front of the microphone sweating like last week.

This week I wanted to look at a couple of animal mysteries that are supposedly solved. Imagine me cracking my knuckles to get down to business, because they’re not actually solved but you and I are going to solve them right now.

If you do a search for mythical animals that turned out to be real, the water owl is on just about every single one. The water owl is supposedly a huge sea monster with the body of a fish and the head of an owl, with big round eyes. According to the medieval myth, the water owl (also called the Xiphias) was supposed to ram ships with its sword-like beak, or slice through them with its huge dorsal fin.

According to those solve mystery animals lists, it turns out that the monster was really a Cuvier’s beaked whale. But in TH White’s 1960 translation of the Book of Beasts, a 12th century bestiary, Xiphias is clearly identified as a swordfish. Elsewhere it’s also called gladius, “so-called because he has a sharp pointed beak, which he sticks into ships and sinks them.” Not coincidentally, the swordfish’s scientific name is Xiphias gladius, which basically means “sword sword.”

Directly under the Gladius entry is that of the serra, which “is called this because he has a serrated cockscomb, and swimming under the vessels he saws them up.” I don’t know what the serra is supposed to be and neither does TH White. It’s possible it was a muddled account of the sawfish.

There is no entry for sea owl, water owl, or anything similar in any bestiary I could get my hands on. It’s possible that the Xiphias if medieval bestiaries and Cuvier’s beaked whale comes from the whale’s scientific name, Ziphius cavirostris, with Ziphius spelled differently from the swordfish’s Xiphias, although I’m pretty sure the pronunciation is the same. Xiphos means sword in Greek and the whale does have an elongated beak, although nothing like a swordfish’s, and not even very long compared to other beaked whales. Another common name for it is the goose-beaked whale, which is a lot more accurate.

Its face and its beak look nothing like an owl’s, nor does it have a very big dorsal fin. Cuvier’s beaked whale is a relatively common whale found throughout the world. It grows up to 23 feet long [or 7 meters] and can be gray, brown, or even a reddish color. It’s a deep diver and habitually feeds on squid and deep-sea fish. In fact, it holds the record for the longest and deepest recorded dive for any mammal—over two hours underwater and over 9800 feet deep [or nearly 3,000 meters]. That’s almost two miles. Its flippers fold back into depressions in its sides to reduce drag as it swims. Like other beaked whales it has no teeth except for two tusks in males that stick up from the tip of its lower jaw. Males use these tusks when fighting, and many whales have long scars on their sides as a result.

The swordfish also has no teeth, but it does have a hugely elongated bill that it uses not to spear fish, but to slash at them. It’s a fast, scary-looking fish that can grow up to 15 feet long [or 4.6 meters], and it does have a pronounced upright dorsal fin. And while its bill isn’t exactly owl-like, since owls all have short bills, it does have huge round eyes.

In other words, the water owl isn’t Cuvier’s beaked whale. It’s probably the swordfish. And if anyone can point me to a primary source that mentions an animal called the water owl, I’d be much obliged.

Like Cuvier’s beaked whale, the swordfish spends a lot of time in deep water. Its deepest recorded dive was over 9400 feet [or 2,865 meters], almost that of the deepest recorded whale dive. It eats fish, squid, and crustaceans, swallowing the smaller prey whole and slashing the larger prey up first.

One interesting note about the swordfish’s eyes. Like marlin, tuna, and some species of shark, the swordfish has a special organ that keeps its eyes and brain warmer than the surrounding water. This improves its vision, but it’s also really unusual in fish, which are almost exclusively cold-blooded.

Another animals that appears on the mythical animals found to be real list is the devilbird, also called the ulama. It’s a Sri Lankan bird whose call is supposed to be a death omen, and the spot-bellied eagle owl is supposed to be the actual bird with the eerie human-like scream. But that may not be the case.

So what is the legend? What bird might be behind it? And most importantly, what does it sound like?

The legend shares similarities with folk tales like La Llorona and the Banshee, and many others throughout the various cultures of the world. in the Sri Lankan legend, a man who thought his wife was cheating on him killed their infant son. His wife went insane, ran into the jungle, and died. The gods transformed her into the ulama bird, and now her terrible wailing warns others that they are doomed.

The trouble is, not only is no one sure which bird is actually the ulama, no one’s really sure what the ulama sounds like. Some accounts say it sounds like a little boy being strangled, others just say it’s a terrifying scream. What seems to be the case is that any creepy-sounding night bird call is said to be an ulama.

I did a search online and didn’t come up with much. This audio is the closest thing to a bona fide ulama call that I could find. Most of the calls in the video are hard to hear and there’s a lot of background noise, so I just snipped out the two best calls to give you an idea:

There are a lot of birds people think might be the ulama. The most common suggestion is the spot-bellied eagle owl, which nests in Sri Lanka although it doesn’t live there year-round. It is an adorable floof like an owls, with ear tufts and big dark eyes. It’s not spooky-looking, but it is spooky sounding. Here’s a sample of its call:

Then there’s the highland nightjar, the brown wood owl, the crested honey buzzard, the crested hawk eagle, and many others. The crested hawk eagle and crested honey buzzard are diurnal hunters, so are not likely to give their calls at night. The brown wood owl, which by the way looks like the spot-bellied eagle owl with an Afro instead of ear tufts, just hoots like a regular owl. The highland nightjar, also called the jungle nightjar, calls at dusk, and like all nightjars is hard to spot. It’s gray with black streaks and black-barred tail and wings. The problem is, it sounds like this:

[cute instead of creepy nightjar call]

So what is the ulama? Here’s my suggestion. It’s not a particular bird at all, but an interpretation of any number of bird and animal calls. If you hear an inhuman scream or wail in the night, and you know about the ulama legend, then that call is naturally an ulama call. It doesn’t matter that some other person on some other night might hear a completely different call and also know it’s the ulama. All terrifying cries in the night are the ulama.