Let’s learn about horseshoe crabs and cone snails! The former is harmless, the latter is deadly. Both are interesting!

This episode’s animals are inspired by the podcast Animals to the Max and by the book Strange Survivors by Dr. Oné R. Pagán. Check both out because they are awesome! 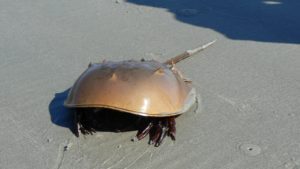 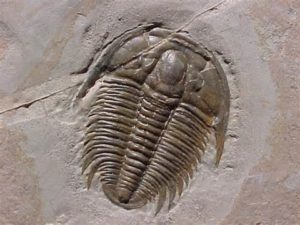 A cone snail just wants to be left alone to be a cone snail but it will kill you if it has to: 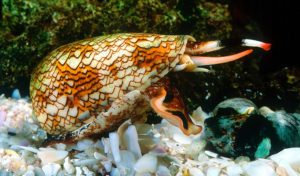 The Glory of the Sea has a pretty shell: 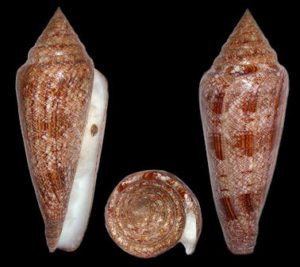 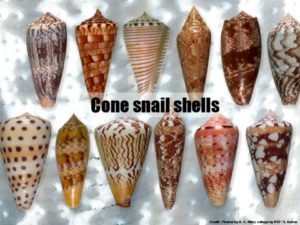 The rarest seashell in the world: 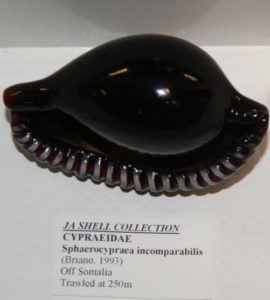 This week we’re going to look at animals inspired by a book I recently read and a podcast I recently discovered.

The podcast is called Animals to the Max, and it’s one of several new animal podcasts that I’ve been enjoying lately. In most episodes, the host Corbin Maxey interviews someone who works with animals. Recently I was listening to episode 15, and the subject of horseshoe crabs came up briefly. Those things are awesome and well deserving of the term living fossil, so let’s start there.

First of all, horseshoe crabs are not actually crabs. They’re not even crustaceans. In fact, they’re more closely related to spiders and scorpions than to crustaceans. There are four species of horseshoe crabs alive today, three from Asia and one from the Gulf of Mexico and American Atlantic coast. Females are larger than males and depending on the species, may be about a foot long including the tail, or 30 cm, or twice that length.

The horseshoe crab gets its name from its rounded, slightly domed carapace that’s kinda sorta the shape of a horse’s hoof, with a long spike of a tail sticking out from its rear. It has a ridiculous number of eyes—seriously, it has nine eyes plus some photoreceptors on its tail. But it doesn’t see very well. Mostly it just senses light, although it can also see into the ultraviolet range.

It also has five pairs of legs tipped with little claws, and its mouth is in the middle of the base of its legs. Its legs act as shredders to cut up its food into tiny pieces. It eats worms and other invertebrates, and will eat fish if it can get it. Most of the time it swims upside-down. It can breathe air on land for short periods of time as long as its gills stay damp. Oh, and it can regenerate legs if one is injured.

Horseshoe crab blood is blue because instead of hemoglobin, its blood contains hemocyanin to transport oxygen throughout the body. Hemoglobin contains iron, which is red, while hemocyanin contains copper, which is blue. Its blood also contains amebocytes instead of white blood cells, and amebocytes have medical applications for humans, specifically as a way to detect bacteria in medical equipment. That means horseshoe crab blood is valuable. Half a million horseshoe crabs are caught every year, up to 30% of their blood is harvested, and the crabs released back into the wild none the worse for wear. At least, that’s how it’s supposed to go. In fact, almost 30% of the horseshoe crabs released just up and die due to stress, and some companies don’t even release them. They just quietly sell them as bait. Horseshoe crabs have been used as commercial fishing bait and ground up as fertilizer for years. Because of all these pressures, along with pollution and the development of beaches where they lay their eggs, the horseshoe crab has gone from being one of the most numerous animals in the ocean to threatened in a matter of decades. Fortunately, many places have put protections and harvesting limits in place to help the population rebound.

Horseshoe crabs first appear in the fossil record 450 million years ago, near the end of the Ordovician Period, back when most life lived in the oceans and fish with jaws were only just evolving. This was well before dinosaurs. This was well before any animals were living on land at all, although probably some marine animals had discovered that if they laid their eggs on the beach, nothing much would eat them, and some other marine animals had discovered that if they could haul themselves out onto the beach for short periods of time, they might find some eggs to eat. The horseshoe crabs alive today are basically identical to the horseshoe crabs found throughout the fossil record. They hit on a successful body plan hundreds of millions of years ago and have stuck with it ever since.

Trilobites were also everywhere during the Ordovician as well as before and after, until they died out 252 million years ago. Trilobite fossils are really common so you’ve probably seen them, but they looked sort of like big roly-polies, or pill bugs, or sow bugs, depending on what you call them. Horseshoe crabs are actually related to trilobites, and one of the big questions is why trilobites died out after being so incredibly successful for so long—270 million years—while horseshoe crabs didn’t. It was probably just luck. The Great Permian Extinction event wiped out almost 90% of all life on earth, and even before then trilobites were already in decline, while the horseshoe crab was chugging along just fine.

If you’re on the beach and see a horseshoe crab on its back, trying to get right side up, help it by flipping it onto its feet. It won’t hurt you, and you might very well save its life.

The other animal I want to look at today is the cone snail, inspired by a brand new book called Strange Survivors by Oné Pagán. Dr. Pagán kindly sent me an advance copy and it is definitely a book a lot of you would find interesting. It’s about evolutionary forces and how things like venom developed in various animals. I’ll put a link in the show notes if you want to order a copy for yourself. One of the animals Dr. Pagán talks about in the book is the cone snail. I’d never heard of it before but it’s fascinating.

There are something like 800 species of cone snail, in fact. They live in tropical oceans and their shells often have beautiful geometric patterns, the kind collectors spend big bucks for. But all cone snails are venomous and some can be fatal. Cone snails are snails and therefore not exactly known for their speed, but the larger ones hunt and kill fish. How do snails hunt fish? Usually it’s the other way round.

Well, let me just tell you. You are not even going to believe this, but you should, because it is a real thing that actually happens. I’ll use the geographic cone snail as an example, because it’s been well studied. It’s about 6 inches long, or 15 cm, and is common throughout shallow reefs in the Indian Ocean and the Red Sea. It’s also the most toxic of cone snails, and there is no antidote to its venom.

So, imagine a cone snail on the bottom of a shallow, warm ocean. Small fish are swimming around. The cone snail has a mottled brown and white shell, quite pretty, and the snail itself is somewhat similar in color with a siphon sticking out of the bottom of its shell. It’s not bothering anything and some little fish ignore it because hey, they’re fast fish and it’s just a slow snail.

But when the little fish get close to the snail, something odd happens. They just sort of slow down. They stop moving and sink to the bottom, but they don’t act panicked. That’s because the snail has released venom into the water, venom containing insulin that mimics the insulin found in fish. When a fish absorbs the venom through its gills, it goes into hypoglycemic shock, which stuns it. The snail then fires a modified hollow tooth called a harpoon into the fish, injecting more venom and killing the fish. The harpoon is attached to the snail’s body by a proboscis, or venom duct, which the snail uses to winch the fish into its mouth to digest.

So far researchers have found two snails that stun fish with venom released into the water, the geographic and the tulip cone snails, but all cone snails have the harpoon contraption to shoot fish with. And the harpoon is fast. It travels at about 400 miles per hour, or 644 km per hour, and special muscles at the base of the venom duct can pump venom into the fish just as fast. Sometimes a snail will hide in the mud or sand and wiggle its proboscis like a worm, and when a fish comes to investigate, the snail harpoons it. It takes the snail a week or two to digest a fish, and during that time it also grows a new harpoon.

Cone snails also use their harpoons defensively, and they can penetrate right through clothes and even divers’ wetsuits. And the venom can kill a human in a matter of hours. The problem is that many cone snail shells are really pretty, so people pick them up to look at. The snail thinks it’s about to be eaten, defends itself, and the person thinks, “Ow, that felt funny. And my hand is going numb. Hmm. Now my whole body is going numb, how strange.” And then they die. Well, it takes longer than that, but you get the idea. Of course, only 36 people have actually died from cone shell stings in the last 90 years, but just a reminder that if you don’t get in the water you are probably safe from venomous marine snails.

On the other hand, researchers are very interested in the cone snail’s toxins. They could lead to painkillers that don’t cause dependency, better treatments for diabetes, and even treatments for nervous system disorders like Parkinson’s disease and Alzheimer’s. At least one painkiller developed from peptides in a cone snail toxin is already on the market.

One cone snail, the Glory of the Sea, was at one time thought to be the rarest shell in the world. In 1970 its habitat was discovered by divers, in various places throughout the Indo-Pacific but mostly near the Solomon Islands. Before then, though, collectors would spend thousands of U.S. dollars on a specimen. These days they can still go for around one or two hundred bucks just because they’re really pretty and still not terribly common. I’ll put a picture of one in the show notes.

This episode is a little short so let’s just plunge down this rare shell rabbit hole. The rarest shell in the world is arguably that of Sphaerocypraea incomparabilis, and its story is pretty awesome. In 1963 a trawler dredged up a dark brown cowrie type shell that made its way to a Russian shell collector. Rumors of the shell leaked out and in the 1990s, a collector named Donald Dan flew to Moscow and managed to buy the shell. It turned out to be the shell of a snail that had been thought extinct for 20 million years. It’s still extremely rare, though. Only six of the shells are known to be in collections and the living snail still hasn’t been examined by scientists or formally described.

I don’t want to get in the water more than about ankle deep, but I do enjoy beachcombing. Apparently there’s some money to be made in shell collecting, too, but don’t pick up any cone snail shells unless you’re 100% certain the shell is empty.