Join us this week to learn about the aurochs, the gaur, some mystery cattle of Patagonia, a farting monster cow, and a ghost cow that turned out to be not so ghostly! 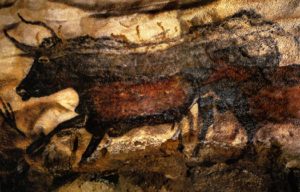 A gaur. Holy cow (heh) those things are enormous! 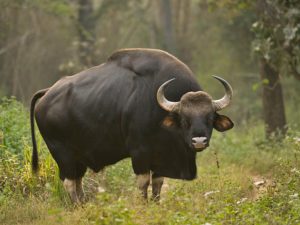 The bonnacon, famous for stink. I love how this one looks awfully embarrassed:

We’re going to learn about some unusual cattle this week. You may not think cows are very interesting, but I think I can change your mind.

The aurochs was a type of Ice Age megafauna. A big bull aurochs could stand almost six feet tall at the shoulder, or 180 cm, and some researchers estimate it could weigh as much as 3,300 lbs, or 1500 kg. Both cows and bulls grew horns. In shape the aurochs looked roughly like modern cattle, but the legs were longer, it was overall more muscular, and cows had small udders that weren’t especially visible. From cave paintings of aurochs, we know that calves were born reddish-brown with a lighter muzzle, but as they grew older, the bull calves became either dark brown or black, with a white stripe along the spine called an eel stripe.

The aurochs was strong, fast, and could be very dangerous. Bulls sometimes killed each other when fighting, and they were famously ferocious when hunted.

Sometime between the 3rd and 1st centuries BCE—and BCE just means “before common era” and takes the place of the old term “before Christ” to make history a little more inclusive—a group of scholars translated the Hebrew Bible into Greek. This is the book that makes up the Christian Old Testament. The scholars were known as the Seventy, and they had to make a lot of decisions during their translation. In the case of the re’em, they mistranslated it as monokeros, which in English is unicorn. They didn’t know what the re’em was because it was already extinct in many parts of its former range. If you’ve guessed that it was the aurochs, pat yourself on the back.

The aurochs had started to go extinct in various places due to overhunting and habitat loss as early as the fifth century BCE. As it became rarer, only nobility were allowed to hunt it. But it was a tough animal that had once been common throughout much of Eurasia and the middle east, and even north Africa. It hung on for millennia, but by 1564, only 38 aurochs remained, all of them in one herd in Poland. The last one died in 1627 of natural causes.

If you listened to episode 47, about strange horses, you may remember the heck horse that was bred in the 1920s to look like the extinct wild horse. There’s also a heck cow bred by the same brothers, Heinz and Lutz Heck. Heck cattle resemble aurochs in many respects, although it’s still a domestic breed and not a perfect match. More recent projects to breed cattle that are as similar as possible to aurochs include ongoing genetic de-extinction attempts as well as more refined back-breeding projects than the heck cattle breeding.

There are a number of wild relatives of cattle, known as bovids overall and bovines for their closest relatives. Water buffalo, yak, gaur, bison, and many others are all bovids, and many of those species have been domesticated too. Some antelopes are also considered bovids.

The largest living bovid is the gaur, also called the Indian bison. It’s a wild cow native to southeast Asia, although it’s threatened due to habitat loss and overhunting. It’s protected these days, but poaching is still a problem. A big bull can grow over seven feet high at the shoulder, or 220 cm, and if you count the muscular hump just behind the shoulder, it’s even taller. It’s an incredibly heavy, massive animal in addition to being tall. Only elephants, rhinos, hippos, and giraffes are heavier. It lives in forests and eats leaves, flowers, fruit, some types of grass and clover, and the bark of some trees.

Now let’s talk about some mystery cattle in one of my favorite places, Patagonia, which is the southern section of South America.

In the early 16th century, our old friend Antonio Pigafetta sailed around the world with Magellan and wrote a detailed account of the voyage once he returned to Spain in 1522. Pigafetta reported that the natives of Patagonia told him about devils with two horns and long hair, that breathed fire and also farted fire. These interesting fire details aren’t reported by anyone else, so it’s possible that Pigafetta added them to make the story better. He also would have been familiar with the bonnacon, an animal found in bestiaries at the time and written about by Pliny the Elder. I have learned that PLY-nee is an acceptable alternate pronunciation of his name, although it’s too late for me. They both sound wrong now.

The bonnacon was described as a bull with a long mane like a horse and horns that curled backwards. Because its horns couldn’t be used for defense, it was supposed to run away from danger and fart so prodigiously that the fumes would set fire to everything nearby, and poop would be scattered across three acres. Medieval bestiaries played this for laughs, with pretty epic illustrations, but people also believed it. It’s possible that Pigafetta thought the Patagons were describing the bonnacon. It’s also likely, incidentally, that the bonnacon was a type of buffalo or bison, many of which have small curved horns. Many hoofed animals will void their bowels when stampeding away from predators, so this could be the start of the story.

But while the farts of flame seem to be Pigafetta’s invention, it is definitely the case that many Patagonian tribes have stories of horned animals and spirits that seem remarkably bovine. In the late 19th and early 20th century, a man named Lucas Bridges collected many traditional stories of the people in Tierra del Fuego, which is at the very tip of Patagonia and which is remote even now, and was certainly remote a century ago. He reported that the Selk’nam people told stories about Hachai, a horned man with white fur and red stripes who acted as a fierce and powerful protective spirit along with his two sisters. Bridges witnessed a pantomime of Hachai that was a remarkable imitation of cow-like behavior. But the man performing it had never even seen a cow. Because here’s the thing: there is no known bovid native to South America. Tierra del Fuego doesn’t even have deer.

The Selk’nam were a nomadic people who hunted throughout southern Patagonia until the late 19th century, when British settlers moved in to raise sheep. The Selk’nam didn’t understand that the sheep belonged to anyone. They considered the sheep fair game, literally. In retaliation, the sheep ranchers paid armed militia to kill the Selk’nam—all of them. Lucas Bridges was one of the few who tried to help them by allowing them to live on his land without interference. But by the turn of the 20th century only a handful of Selk’nam survived. They are all gone now and all we have left are stories and traditions collected by anthropologists and missionaries.

So if the Selk’nam had never seen the cattle introduced by the Spanish, and there are no native bovids in Patagonia, how did they imitate cattle so perfectly? Bridges wasn’t the only one to remark on this. In 1833, in southern Chile, a man of the Chono tribe visited a ship and while there, he saw two powder-horns. He put them to his head and bellowed like a bull. Moreover, while in much of South America the local native languages borrow the word for cattle from Spanish, native Patagonian languages have their own words for cattle.

There are two theories. The first has to do with a shipwreck. In 1540 a ship belonging to the Bishop of Plasencia’s fleet sank in the Strait of Magellan. It carried livestock, and we know that some sheep survived. A 1557 expedition reported sheep in the area, and in 1741 some natives brought three freshly killed sheep to the leader of another expedition. It’s entirely possible that some cattle survived long enough to make an impression on the local population, and many stories of horned water monsters have been collected in Patagonia. But if we take Pigafetta’s report of the fire-farting horned spirit as inspired by cattle sightings, the shipwreck happened a few decades too late.

The other theory posits that there was once a bovid that lived in Patagonia. There are a few small hints that this may have been the case. A 1586 Spanish document refers to a buffalo-like animal with “horns with their tips curved backwards which this witness guesses must be buffalo and that they say that the males are black and the females white and that they have soft wool.” In 1598 explorer Oliver van Noort reported animals like stags and buffalo at Puerto Deseado. The stags were guanaco, which are related to llamas, but we don’t know what his buffalo might have been.

But we have no fossil remains. Bovids originated in Eurasia and entered North America relatively late, and as far as researchers can tell none ever made it as far as South America. None ever made it farther south than Mexico, in fact, until domestic cattle were brought to South America by the Spanish. By the mid-1500s cattle had been introduced into the Pampas, a vast prairie north of Patagonia, and feral herds may have made their way to Patagonia by the end of the century.

The Spanish cattle were tough and adaptable, and a small population still lives wild in the Andes. They have adapted to life in forests and to bitterly cold weather, including growing long fur in winter. And their horns are often described as resembling the horns of the aurochs. And with that, we have come full circle.

But we’re not done yet, because I’ve got a cow mystery that you’re going to just love. You know how one of the most frustrating things about cryptozoology is that no one gets good photographs of mystery animals? Well, listen to this story.

There’s a town in central New Jersey called Griggstown, and the Griggstown Cow was a legend told in the area. On foggy nights or rainy days, it was said, a solitary hunter or hiker might see a ghost cow in the mist near a canal outside of town. Occasionally someone would take a picture of the ghost cow, but the photos were all blurry, and no tracks or manure were ever found. The legend persisted for thirty years until November 23, 2002, when someone called the canal park office to report that the Griggstown Cow was stuck in a muddy ravine near the canal.

And sure enough, it was. It was a real live Holstein bull that had been living wild for decades after the area dairy farms closed, but he was old now and wasn’t strong enough to get out of the ditch. Rescuers managed to hoist him out and he was left lying on the grass to recover. But after two days he still hadn’t managed to stand, so the park brought in a veterinarian to examine him. Unfortunately it turned out he was in such poor condition that the vet euthanized him so he wouldn’t suffer, and he was buried in the park.

It’s a sad ending, but a thirty-year-old cow has lived a good long life. And if the Griggstown ghost cow can turn out to be a real animal, maybe other cryptids are real animals too.