I am sick and sound like a frog, or possibly a raven, so here’s a croaky episode about both!

Thanks to Corbin Maxey of Animals to the Max and Simon for their suggestions! 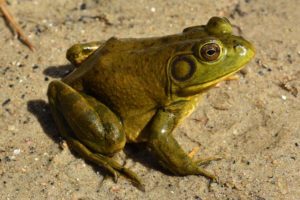 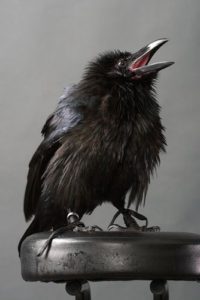 NOT a baby raven (it’s probably a corncrake): 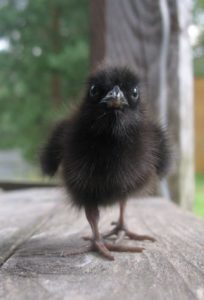 Guess who has a cold! That’s right, I do! If this is the first episode you’ve ever listened to, I promise I don’t ordinarily sound like this.

Because my voice is such a mess, let’s have a short episode this week and learn about two animals that sound kind of like I do right now: the bullfrog and the raven. Thanks to Corbin Maxey of the great podcast Animals to the Max who suggested frogs, and friend of the pod Simon who suggested ravens, both of them in response to my complaining on Twitter that I had a sore throat. Little did they know what I would sound like a few days after that tweet!

Let’s start with the bullfrog. The American bullfrog is a species of frog. You probably figured that out without me needing to tell you. It originally only lived in eastern North America, but it’s been introduced in many other parts of the world. The reason it’s been introduced elsewhere is that it’s raised as food—specifically, it’s raised for its hind legs, which are considered a delicacy. It’s also sometimes kept as a pet. Sometimes it escapes from captivity and sometimes it’s just released into the wild by people who don’t know any better. In many places it’s become an invasive species that outcompetes native amphibians.

The bullfrog is a big, heavy frog. It can grow up to eight inches long from nose to butt, or 20 cm, but the hind legs are much longer. It can also be up to 1.8 pounds in weight, or 800 grams. Because the bullfrog has such long, strong legs, it can jump up to ten times the length of its own body.

The bullfrog is olive green in color, sometimes with darker blotches or stripes. The belly is pale and the lower part of the nose along the upper edge of the mouth is often bright green. Males usually have yellow throats, or technically yellow gular sacs. This is the sac the male inflates in order to make his loud croak.

Male bullfrogs have territories in swampy areas that they defend from other males, but the territories aren’t very large, maybe 20 feet apart from each other at most, or 6 meters. The males tend to move around and gather in groups during the breeding season, though, which is usually spring and early summer. The males croak loudly to attract females, and sometimes wrestle each other to show who’s stronger.

The female bullfrog lays her eggs in shallow water with plenty of plant cover. If the temperature isn’t too warm or too cold, the eggs hatch in about five days into tadpoles. The tadpoles have gills and teeth, although at first they don’t use their teeth for anything. They eat algae and other tiny food at first, and as they grow bigger, they start catching larger food.

A full-grown bullfrog will eat anything it can swallow, not just insects. It’ll eat mice and other rodents, bats, birds, other amphibians, crawdads, snails, fish, and small reptiles. It uses its long sticky tongue to catch its prey, then clamps its jaws shut so the prey can’t escape. If part of the prey is sticking out of its mouth, like a tail or leg, the frog uses its thumbs to cram the bits in. If the prey won’t quit struggling, the frog may jump into the water and swim around until the animal drowns. They should call them sharkfrogs, not bullfrogs.

A lot of animals eat bullfrogs, though, like alligators and various snakes, birds like herons and kingfishers, and river otters. I have personally seen a snapping turtle attack a bullfrog. That was creepy. Sometimes when something attacks a bullfrog, it will actually scream. This sometimes startles the predator enough that it lets go, and the bullfrog can escape. Bullfrogs show some resistance to snake venom too.

The bullfrog gets its name from its voice, not its size. It sounds like this:

Next, hopefully I will not lose my voice before I finish talking about the raven. There are a number of different raven species but they all look similar. They’re big black birds with heavy bills and deep, raspy voices. They look like a buff crow. We’ll talk about the common raven today, which lives throughout the northern hemisphere: that means North America, Greenland, and most of Eurasia.

The common raven can grow up to 26 inches long, from bill to tail, or 67 cm, with a wingspan over four feet wide, or 150 cm. Its feathers are glossy black, with purplish or blue iridescence in sunlight. Young ravens look similar but are not as glossy. Sometimes you’ll see a picture online of a little black poof of a baby bird labeled as a baby crow or raven, but that’s a mistake. Baby ravens have sleek feathers, not downy feathers. I’ll put pictures in the show notes so you can see the difference.

The raven is an omnivore, which means it pretty much eats anything it can get. It will eat roadkill and other carrion, fruit and grain, insects, small animals, other birds, and eggs. It’s also extremely smart, which means it can figure out how to get into trash cans and other containers to find food humans think it secure. If a raven finds a good supply of food, it will call other ravens to join in the feast. This usually happens when a younger raven finds food and calls its friends, even if the food source is being guarded by a mated pair of adult ravens. Those pesky kids.

Ravens mate for life, but younger birds who haven’t paired off usually live in flocks. They’re devoted family birds, with grown young of a pair sometimes hanging around to help their parents raise the next nest. The raven lives a long time, up to 21 years in the wild and over 40 years in captivity.

The only animals that eat ravens are large owls and eagles, and even that’s rare. Ravens are big enough, strong enough, and smart enough to defend themselves.

Ravens are extremely intelligent birds. Research suggests that they may even have something approaching an actual language. They can certainly reason and deceive each other, and demonstrate empathy in their interactions with other ravens. They also use tools to help get food, and are well known to play with items, sometimes making toys out of twigs or other items to play with as a group. Young ravens in particular are curious and will steal shiny things.

Ravens can imitate other animals and birds, even machinery, in addition to making all sorts of calls. It can even imitate human speech much like parrots. If a raven finds a dead animal but isn’t strong enough to open the carcass to get at the meat, it may imitate a wolf or fox to attract the animal to the carcass. The wolf or fox will open the carcass, and even after it eats as much as it wants, there’s plenty left for the raven.

But ravens also communicate nonvocally with other ravens. A raven will use its beak to point with the way humans will point with a finger. Incidentally, dogs understand what pointing means, but wolves don’t. Just throwing that in there. They’ll also hold something and wave it to get another raven’s attention, which hasn’t been observed in any other animal or bird besides apes.

I will soon be reduced to communicating nonvocally if I don’t stop and rest my voice. So I’ll shut up and let you listen to a real raven:

You can find Strange Animals Podcast online at strangeanimalspodcast.com. blah blah blah I’m not saying it this week. My throat hurts.

Thanks for listening! Next week hopefully I’ll be all better and sound like a human again instead of like a frog or a raven.