Thanks to Sam and Damian this week for their great suggestions! This week we’re going to learn about the Asiatic linsang (both banded and spotted linsangs) and the walrus!

The banded linsang looks like a realllly stretched-out cat: 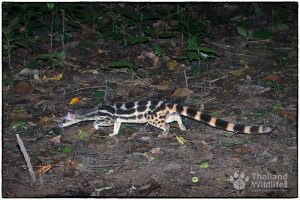 The walrus is not so stretched out: 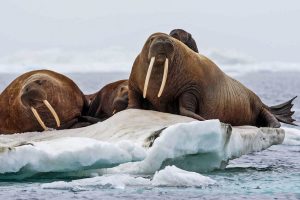 This week we’re going to learn about two mammals that are not related and have nothing to do with each other, but they’re both really interesting. Thanks to Sam and Damian for your suggestions!

First, Sam suggested the banded linsang, describing it “as if someone took a particularly pointy cat and just stretched it reaaaaaaaallly far while also squishing it down”

The banded linsang does look a lot like a cat with a very long ringed tail, but what is it really? Before we answer that, let’s find out a little more about it.

The banded linsang is about the size of a slender cat, but with shorter legs and a much longer body, just as Sam described. It lives in many parts of southeastern Asia and prefers forests, where it hunts for small animals like rodents, lizards and other reptiles, small birds, and insects. It’s nocturnal and secretive, which means we don’t know a whole lot about it, but we do know that it spends a lot of its time in trees. It has a face that somewhat resembles a weasel’s or cat’s, but with a longer muzzle. Its ears are small, its eyes are large, and it has small, neat paws with retractable claws like a cat. It’s tan or cream-colored with a darker face, and has a pattern of large black or dark brown spots that make rows down its back and sides, with smaller spots on its legs. Its catlike tail is as long as its body and its neck is really long too. It sort of looks like a weasel mixed with a cat.

Together, both the spotted and banded linsangs are called Asiatic linsangs. There are two species of linsang that live in Africa, but they’re actually not closely related to the Asiatic linsangs.

Until genetic studies were conducted a few years ago, researchers thought both African and Asiatic linsangs were related to genets. That wasn’t a bad guess since genets look a lot like linsangs, slender, spotted catlike animals with long ringed tails, and they even have claws that are partly retractable. But DNA studies show that while the genet and the African linsangs are fairly closely related, the Asiatic linsangs are more closely related to the cat family.

Because we don’t know much about the Asiatic linsangs, that’s just about all I’ve got for you. So let’s move on to Damian’s suggestion, the walrus!

We do know a lot about the walrus, and it’s an amazing animal. It lives in the Arctic Circle in shallow water just off the coast and spends most of its time in the water or sitting on ice floes like it doesn’t even notice its skin is touching ice.

The walrus’s skin is thick and wrinkly—really thick. Like, almost four inches thick in places, or ten cm. Underneath the skin, the walrus has a thick layer of blubber just like whales do, which keeps it warm in cold water. Its skin looks bare of fur, but it does have some thin hair that isn’t very noticeable, like the hairs on your arm. It does have bristly whiskers that help it find food underwater. The bristles are very sensitive, so that the walrus can find clams and other mollusks even if it can’t see them.

The walrus eats a lot of things, including crabs, sea cucumbers, and shrimp, but it especially likes clams. Its mouth is specially adapted to eat clams, which is does by clamping its mouth over the clam and sucking in so hard that it actually sucks the clam’s body right out of its shell, no matter how hard the clam tries to keep its shell closed.

The walrus is so big that the only animals that eat it are polar bears and orcas, and they don’t eat it very often. Polar bears will sometimes charge at a bunch of walruses on a beach, startling them into rushing toward the ocean. The polar bear isn’t actually trying to catch one of the walruses, it’s just trying to get them to trample a smaller or already injured walrus and leave it behind. Then the bear can kill and eat it. But for the most part, a full-grown walrus is a match for a polar bear. Both male and female walruses have tusks that can grow over three feet long, or one meter, with those of the male being slightly thicker and longer than the females’.

Those tusks were a big part of why walruses are endangered these days. The tusks are ivory, the same material that elephant tusks are made of, and for some reason humans really like ivory. In the 18th and 19th centuries, so many walruses were killed for their tusks and the fatty oil in their bodies that they almost went extinct. Fortunately, the hunting of walruses is now banned except for native populations, who only kill small numbers of walruses using traditional hunting methods.

A walrus uses its tusks for more than just defending itself against polar bears and orcas. It drags them through the sediment at the bottom of the ocean to stir up any small animals that may be hiding there. It uses them like ice picks to help haul itself out of the water onto land or just move around on land, and it even props the tusks on a piece of ice to help keep its head above water while it sleeps. It also has an air sac in its throat that it can inflate to help its head stay out of water, like a built-in life jacket. It even uses its tusks to break holes through ice.

The walrus has flippers instead of arms and legs, which means it can swim quite well but is awkward on land. It dives to find its food and can stay underwater for half an hour at a time, but it isn’t a deep diver. Its hind flippers look like a tail at first glance, but the walrus actually only has a short little nub of a tail. What looks like a tail in the water are its hind flippers, which are modified feet and still have five claws. When the walrus gets out of the water, it rotates its hind flippers around so it can walk on all fours.

Researchers once believed that an ancient walrus that went extinct 13 million years ago was a so-called killer walrus, a carnivore that preyed on small whales and seals. We don’t know much about Pelagiarctos because all we have are some jaw bones and not a full skeleton, but the teeth in those jaws resemble carnivore teeth. But according to a study published in 2016, researchers examined the teeth and compared them to those of modern seals and sea lions, and discovered that they weren’t nearly as strong as they look. They certainly weren’t strong enough to bite through bones without cracking, so researchers now think that Pelagiarctos probably ate small animals like fish and squid.

The common ancestor of the walrus and other pinnipeds lived on land but spent a lot of time in the water, and probably looked a lot like an otter. It lived around 20 million years ago but may have still been around as recently as five million years ago. It lived in the Arctic, but back then the climate in the Arctic was more temperate than it is today. It had webbed feet, grew about three and a half feet long, or 110 cm, and had a long tail and short legs.

Fossils of a more recent ancestor of the walrus have been found in Japan, dating to around 10 million years ago. It probably looked a lot like the modern walrus with two big exceptions. It was about half the size of the walrus and it didn’t have tusks, just regular sharp teeth like seals have.

We’re still learning about the ancestors of pinnipeds, with a number of walrus ancestor fossils discovered in the last decade or so. Researchers think about ten million years ago, the ancestors of walruses started to diversify into many different species. At the time, ocean levels were lower than they are today. When the sea levels rose, the various species of walrus became separated from each other by deep water. Some of the species went extinct, but one survived and evolved into the modern walrus. Thank goodness we didn’t kill them all off for their tusks!