This week’s episode is about the world’s tiniest birds, the hummingbird! Thanks to Tara for the suggestion! 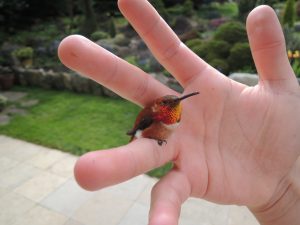 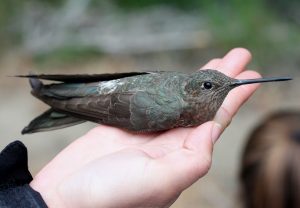 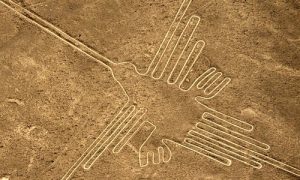 If you’re interested in my little side project, Real Life Cooking Podcast, here’s the URL (or you can just search for it in your regular podcast app): https://reallifecooking.blubrry.net/

This week is another listener suggestion, this one from Tara! Tara’s favorite bird is the hummingbird, and I can’t believe I didn’t know that before she texted me, because I’ve known Tara for a long long time and in fact she is married to my brother. Tara, I hope you are ready for hummingbird-themed birthday gifts for the rest of your life!

The bee hummingbird is literally the size of a bee. Males are slightly smaller than females and barely grow more than two inches long, or 5.5 cm, from the tip of its long bill to the end of its tail. It weighs less than an ounce, or 2 grams. A penny weighs more than this bird does.

The bee hummingbird lives in Cuba and parts of the West Indies. Males are iridescent green and blue while females are more green and gray. During the breeding season, in spring and early summer, males also have red or pink spots on the head and throat.

Just like other birds, the bee hummingbird builds a nest and lays one or two eggs. The female takes care of the eggs and babies by herself. But her nest is so incredibly small! It’s barely an inch across, or 2.5 cm, lined with soft items like dandelion fluff and cobwebs. And the bee hummingbird’s eggs are the size of peas. I have some peas in my lunch today. Peas are really small. Can you imagine the smallness of an egg the size of a pea, and the smallness of the baby that hatches from the egg? I just died. I literally just died because it’s so cute and tiny I can’t stand it. Don’t worry, I came back to life to finish telling you about hummingbirds.

*rimshot!* [it’s actually called a sting, and I played this one myself. Years of drum lessons have finally paid off!]

But the hummingbird’s bill isn’t a straw. It can open its bill just like other birds, and in fact hummingbirds eat a lot of tiny insects they find while foraging for nectar. They need to eat insects because while nectar provides a ton of energy, since it’s mostly just sugar, it doesn’t supply many nutrients. The upper part of the bill is much longer than the lower part, and the lower bill actually fits tightly inside the upper bill. That’s why it looks like a hummingbird’s bill is a tiny needle-like tube, since even if the bird has its mouth open it’s hard to tell.

A hummingbird actually uses its tongue to lap up nectar. The hummingbird’s tongue is extremely long, up to twice the length of the bill, and has a forked end. The tongue also contains grooves. When a hummingbird puts its bill into a flower, it sticks its tongue out and laps up the nectar rapidly, something like 13 licks a second. The nectar travels up the grooves into the bird’s mouth.

If you were wondering, a mother hummingbird feeds her babies nectar and tiny insects. Also, the reason hummingbirds use so much spiderweb silk in their nests is because it will expand as the babies grow. I’m sorry, I just died again. Give me a second to stop dying of cute. A baby hummingbird grows quickly and some species learn to fly at only two weeks old, although the mother bird continues to feed the babies for a little longer.

Hummingbirds move fast, which is why they need all that energy from nectar. Their energy needs are incredibly high. When a hummingbird flies, its metabolic rate increases to the highest ever measured in an animal that’s not an insect. Its heart can beat over 1,200 times per minute and it may breathe 250 times per minute. At night, or if there’s not a lot of food around, the hummingbird’s metabolism slows dramatically and the bird enters a state called torpor. Its body temperature falls, its heartrate can drop to only 50 beats per minute—which is on the slow side for a human—and its breathing rate drops too. Torpor is basically a very short hibernation where the bird will sleep deeply until morning or until it needs to go out and find more food. Even so, a hummingbird can lose up to 10% of its body weight overnight as its body burns fat reserves to keep it alive.

So that makes it all the more amazing that some species of hummingbird migrate long distances, including over the ocean. All hummingbird species are native to the Americas, but many species that spend the summer in North America migrate south to spend winter in Central America or Mexico. Some species in South America migrate north to winter in warmer areas too. The rufous hummingbird migrates from Alaska to Mexico, about 3,900 miles, or almost 6,300 km, and then it migrates back up the western coast of North America in spring.

The hummingbird doesn’t fly like other birds. It flaps its wings in a figure 8 motion that provides lift, which allows it to hover. Its wings beat incredibly quickly, up to 80 times a second. Even the slowest-moving hummingbird, the giant hummingbird, beats its wings 12 times a second. I don’t know about you, but I’m pretty sure I can’t do anything 12 times a second except maybe flutter my eyelashes, and even then my eyelids would get tired after a few seconds. Also, that’s not going to help me fly. Not even if I wear really long false eyelashes.

The hummingbird gets its name from the humming sound its wings make as they beat so incredibly fast. But the hummingbird’s feathers also make other sounds as the bird flies. In some species of hummingbird, the male grows special feathers that vibrate as he flies and make a whistling or chirping sound. This helps females find a male and helps the male defend his territory by announcing his presence to other males.

Oh, you didn’t know hummingbirds were territorial? They sure are. They may be tiny and pretty, but they’re fierce too. A male will chase other males away from his flowers, even stabbing other males with his long bill.

My aunt likes to tell a story of a cat she had years and years ago who liked to go into her garden and lie in the sun. One day the cat leaped at what my aunt thought was a bee. The cat stopped with a startled look on his face and opened his mouth. A hummingbird backed up out of the cat’s mouth and flew away and the cat never bothered a bird or a bee again, since the hummingbird’s beak had stabbed him in the back of the throat.

Needless to say, the hummingbird is the only bird that can fly backwards.

It’s one thing to think, “Oh, hummingbirds are so small” but it’s another thing to see a hummingbird in the wild and really understand how small they are. When I’m out birdwatching I almost always mistake hummingbirds for bees when I first see one. The hummingbird is so small, in fact, that it’s eaten by some larger insects, like the preying mantis, and by larger spiders. Anything that will eat an insect will eat a hummingbird, and that includes some other birds.

Fortunately, the hummingbird is so fast that it can usually get away from predators. It can fly up to 30 mph, or 48 km per hour. Its tail feathers also come out easily and grow back quickly, so anything that grabs it by the tail is probably just going to end up with a few feathers to eat.

The hummingbird flies so quickly through dense vegetation that its brain processes images in a different way from other birds so it doesn’t run into things. It has excellent vision, too, since it finds flowers by sight.

You can attract hummingbirds to your garden by planting flowers they like, such as bee balm, hollyhocks, petunias, trumpet vine, and lots more. You can also put out hummingbird feeders that you fill with imitation nectar. It’s important to keep the feeders cleaned, since the nectar will spoil after a while, mold will grow inside the feeder, and insects may get into the nectar and drown. Also make sure to hang the feeder where the birds will be safe from predators like cats and snakes.

Some of you may have heard that I’ve started a little side project, another podcast called Real Life Cooking where I share recipes and explain how to make them. So as a sort of crossover event, I’ll give you a recipe for making hummingbird nectar.

You don’t need anything expensive, just plain tapwater and plain white sugar. Use one part sugar to four parts water. So if you use one cup of water, add ¼ c sugar. Put them together in a small pot on the stove and heat the water, stirring occasionally, until the water is boiling. Let it boil for about a minute, then remove it from the heat and let it cool to room temperature. Once it’s cool, you can pour it into your hummingbird feeder. Don’t add red food coloring or any kind of flavoring, and don’t use any sugar except regular white sugar. Brown sugar and natural-colored sugars can contain iron, which is toxic to hummingbirds. If the feeder you use isn’t attracting hummingbirds, you can tie a red ribbon around it to make hummingbirds notice it. Make sure to change out the nectar every couple of days so it won’t go bad.

Sugar-water sounds like a horrible thing to feed a wild animal, but it’s exactly what hummingbirds need and what they eat naturally.

Hummingbirds are such unusual birds that it’s hard to imagine what they’re related to. There are birds that resemble hummingbirds in some ways, especially the sunbird that lives in Africa, parts of Asia, and Australia. But the hummingbird and the sunbird aren’t related. They just share a very specific ecological niche, which has resulted in similarities due to convergent evolution.

No, the hummingbird is most closely related to the swift! Not closely related, of course, because the two started evolving separately as much as 42 million years ago. The first ancestral hummingbird is found in the fossil record in South America around 22 million years ago, where they spread throughout the Americas and evolved into the hundreds of species we have today. In the Andes Mountains alone, there are 140 species of hummingbird and researchers keep finding new ones. The blue-throated hillstar was only discovered in 2017, for instance, since it lives in a very small area of the Andes in Ecuador and is very rare.

Researchers keep finding out more about hummingbirds, too. The black Jacobin hummingbird from the mountains of eastern Brazil makes complex sounds that are so high-pitched that the researchers have to record them using equipment developed to record bat calls. So who knows what else we’ll learn about hummingbirds next? I can definitely see why they’d be anyone’s favorite bird.