Thanks to Kim and Richard E. this week for two awesome suggestions! We’re going to learn about land snails and about the gooseneck barnacle!

Some baby snails and a mama snail, or at least an adult snail that is probably ignoring all those babies: 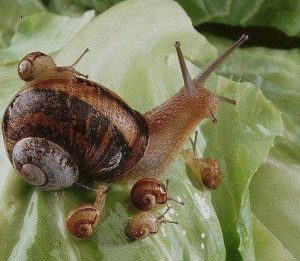 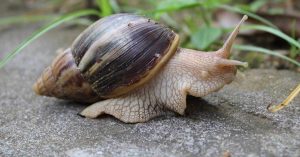 Unlocked Patreon episode about giant African snails (and other stuff) 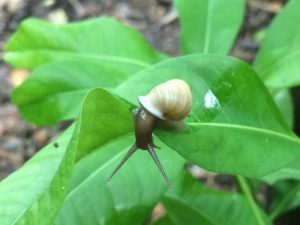 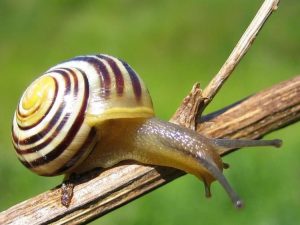 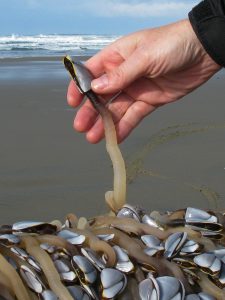 A barnacle goose. Not actually related to the gooseneck barnacle: 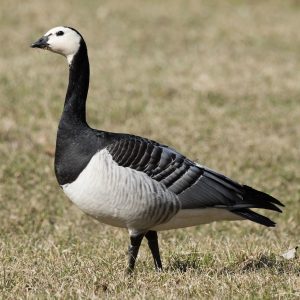 We’re getting to some more excellent listener suggestions this week, this time about some interesting invertebrates. Thanks to Kim who suggested snails, and to Richard E for suggesting the gooseneck barnacle.

Snails are in the class gastropoda, which includes slugs, whether terrestrial, freshwater, or saltwater. Gastropods appear in the fossil record way back in the late Cambrian, almost 500 million years ago. Snails and slugs are so common that no matter where you live, you can probably find one within seconds, if you know where to look.

Snails have shells while slugs don’t, but there’s a third type of gastropod called a semi-slug. It has a shell, but one that’s too small for it to live inside. It’s more of a little armor plate than a snail shell. Slugs also have shells, but they’re vestigial and are actually inside the slug so you can’t see them.

Scientists have long tried to figure out if mollusks developed shells early or if they started out as a wormlike creature that later evolved a shell. A discovery of a 400 million year old mollusk fossil in Wales shows a wormlike body but also a shell—actually seven plate-like shells—which suggests that the shells developed early and that shell-less mollusks later lost them.

The snail has a spiraled shell that it can retract its body into, although not all snails can retract all the way into their shells. Snails that live on land are called terrestrial snails, or just land snails, and those are the ones we’ll talk about today. Land snails have lungs, or rather a single lung, although some land snails have gills instead and live in wet areas, although they’re not technically water snails.

Most land snails eat plant material, which they scrape up using a radula. You may remember from other episodes that the radula is a tongue-like structure studded with tiny chitinous teeth, microscopic ones in this case. Snails are sometimes so numerous that they can cause damage to gardens, so often people buy poison to kill the snails in their yard. But a 2014 study shows that killing snails isn’t very effective. The best way to get rid of snails, or at least minimize the damage they do to gardens, is to pick the snails up and transport them at least 30 yards away, or about 20 meters. Snails have a homing instinct, but distances more than about 20 meters are hard for them to navigate. The snails will probably just make a home where they end up. Also, no throwing them into your neighbor’s garden. That’s cheating.

Most land snails are hermaphrodites, which means the snail fertilizes the eggs of other snails and also produces eggs for other snails to fertilize. Some snails bury their eggs in soil while some hide them in damp leaf litter. The eggs hatch into teeny snails with teeny shells, and as the snail grows, its shell grows too by adding layers at the opening.

Snails need moisture to survive, so a snail secretes mucous that helps it retain moisture. The mucus is also thick enough to protect the snail from sharp objects as it travels around on the flat underside of its body, called a foot. Until recently researchers thought that the mucous also helped the snail move, but it turns out that gastropods move entirely due to muscular motions of the body, which start at the tail and travel in a sort of wave motion to the head. This isn’t the most rapid way to move—a typical snail can only advance about one millimeter per second—but it works for the snail. It can also climb walls and other vertical surfaces since the mucous helps it stick, even if it’s upside-down. The mucus a snail leaves behind in its track is visible until it dries after a few hours, usually called a snail trail or a slime trail.

If a snail’s environment becomes too dry, it will retract itself into its shell and secrete a layer of mucous that hardens, protecting its body from drying out. Later, when the environment is wetter, it softens the mucous and goes about its normal snail activities.

Scientists of all kinds study snails. One recently published study investigated the properties of snail mucous to try to develop an adhesive that can be turned from sticky to non-sticky and back to sticky. Another study from 2011 examined the way snails move to see if that can be adapted to various technologies.

Because snail shells are so common in the fossil record, scientists can measure the oxygen isotopes in shells to learn how dry or wet the environment was during the snail’s life. A recent study of snail shells from the Canary Islands indicates that 50,000 years ago the islands were much wetter than they are now. Also, there were more snails then than now.

The largest living snail known is the giant African snail, which can grow almost a foot long, or 30 cm. It’s native to East Africa but it’s an invasive species in many parts of the world. I actually covered this species of snail in a Patreon episode a few months ago, so I’ll unlock that episode and put a link to it in the show notes if you want to learn more about it. It’s kind of a weird episode and I spend entirely too much time at the end talking about my recent eye surgery, but you’ll learn about the giant African snail and a marine snail called the periwinkle.

New species of snail are discovered all the time, since snails are usually small, often hard to find, and many snails look sort of alike except to the trained eye. In 2012, two species of tiny snails were discovered in a cave in northern Spain. They’re called thorn snails and are less than 2 mm in size. Since they live in caves, like many cave animals they’ve lost pigment and are essentially transparent. More thorn snails new to science were discovered in Panama a few years ago. A snail specimen collected in South America in the 19th century was finally examined a few years ago and described as a new species in 2015. Those are just a few examples; so many snails have been described in the last few decades that it would get boring if I talked about all of them.

Not all snails are brown, of course. Some have lovely shells in different colors, patterns, and shapes. A colorful snail called the Polynesian tree snail, found in Tahiti and a few nearby islands, has been a puzzle to researchers for over a century, since they couldn’t figure out how the snail came to be on the islands. Not only that, but a few of the islands have a variety of the snail with a white shell, which isn’t found on Tahiti. It turns out that the people of the area just liked the white shells, which they used to make jewelry, so they introduced the snails to their islands for a better supply of the shells. The Polynesian tree snail is critically endangered now, but some zoos have started a captive breeding program.

People have eaten snails for thousands of years, and certain species of snail are considered delicacies today. A type of grove snail that lives in Ireland and southern France but not anywhere in between may be evidence that humans brought the snails with them when they first colonized Ireland. Researchers suggest humans arrived in Ireland by boat from southern Europe around 8,000 years ago and brought the snails with them, possibly to farm. They’re actually really pretty snails with a yellow or yellowy-white shell striped with brown.

Another invertebrate humans like to eat is the gooseneck barnacle, also called the goose barnacle. It’s actually a crustacean, and I’m glad I checked because I was honestly certain that it was another mollusk. I think I had it mixed up with certain types of clams with long siphons. But the gooseneck barnacle is a crustacean like last week’s roly poly, but unlike the roly poly, it actually tastes really good—if you can get it.

The gooseneck barnacle attaches itself to rocks and other hard objects in intertidal areas of the Atlantic and Pacific, and it prefers rough water. It can be dangerous to gather. Richard E., who suggested the topic, specifically mentioned the variety known as percebes, which is a delicacy popular around the Iberian peninsula, especially in Portugal and Spain. He mentions that people have died trying to get them, and that his own grandparents have a saying about them, “If you want to get, you have to get your backside wet.”

The gooseneck barnacle attaches itself to an object by its stalk, called a peduncle, which is strong and tough enough to withstand rough waves. At the end of the stalk is the capitulum, which contains the body and is protected with five plates. It extends its legs, which are called cirri and resemble feathers, from an opening in the capitulum, and uses them to filter tiny organisms out of the water that it eats.

Like the land snail and many other invertebrates, the gooseneck barnacle is a hermaphrodite. It mates with the nearest other gooseneck barnacle, and since it literally cements itself to its rock and can’t move afterwards, it’s a good thing that barnacles live in clusters or there wouldn’t be any new ones, since the gooseneck barnacle can’t fertilize its own eggs. The barnacle keeps its fertilized eggs inside its body until they hatch into tiny larvae, which it releases into the water. The larvae live in the sea as plankton for a few months, moulting six times before they metamorphose into cyprid larvae. You may remember that term from the horrifying zombie animals episode last month, but these cyprid larvae are just looking for a nice rock to cement themselves to.

The gooseneck barnacle gets its name from its long stalk, which resembles a goose’s neck, and the protective plates on the capitulum do kinda-sorta look like a goose’s beak from the right angle. Now, back in the olden days people didn’t know that birds migrate. People knew that some birds lived in their area in the winter or summer, but they didn’t know what happened to the birds the rest of the year. Some people believed some birds hibernated, others actually believed they flew to the moon during the winter. In the case of a goose called the barnacle goose, which mostly breeds on remote Arctic islands and then spends the rest of the year in various parts of Europe, in the early medieval days people actually thought it didn’t actually lay eggs or have babies. They thought it and the gooseneck barnacle were the SAME ANIMAL, but that the gooseneck barnacle was a young barnacle goose that was still developing. Therefore, people rationalized, they weren’t actually geese but some sort of fish so could be eaten during Christian fast days when meat wasn’t allowed. This lasted until 1215 when the pope said no, actually, wherever they come from, those things are birds and you can’t eat them on fast days.

The gooseneck barnacle is still causing consternation these days. In 2016, some pieces of driftwood washed up on a few New Zealand beaches, covered with gooseneck barnacles. No one knew what in the heck those things were. A species of gooseneck barnacle is native to the area, but they aren’t usually seen on sandy beaches where people like to swim. A picture of the barnacles caused a lot of speculation as to what they were until scientists and naturalists identified them. Fortunately, though, no one suggested they were baby geese.