Thanks to Pranav who suggested this week’s amazing topic, animals that fossilized with the remains of their last meal inside!

Indrasaurus with a lizard inside. Yum! 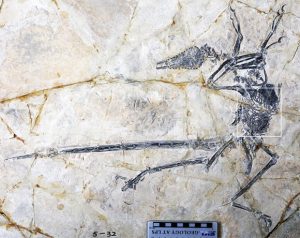 Rhamphorhynchus (left, with long wing bones) and its Fish of Doom (right): 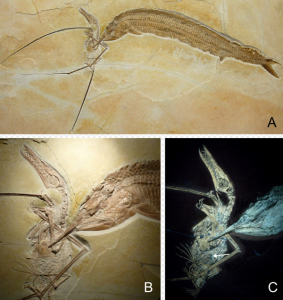 The fish within a fish fossil is a reminder to chew your food instead of swallowing it alive where it can kill you:

The turducken of fossils! A snake with a lizard inside with a bug inside! 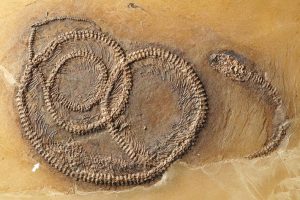 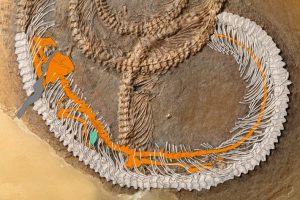 This week we have a listener suggestion from Pranav, who has sent me so many amazing suggestions that he has his own page on the ideas spreadsheet. When he emailed me about this one, he just suggested cool fossils, but the links he provided had a really interesting theme that I never would have thought about on my own. This week we’re going to learn about some fossil animals that have fossils of their last meal inside them!

We’ll start with a recent discovery of a new microraptor species, Indrasaurus wangi, which lived about 120 million years ago. It was an interesting animal to start with, because it had arms that were very similar to bird wings, although with claws, but its hind legs also had long feathers that made it almost like a four-winged animal. It was found in 2003 in northeastern China, but when researchers were studying it in 2019 they found something amazing. Not only did it have an entire lizard skeleton where its stomach once was, showing us that it swallowed its prey whole, the lizard itself was a species new to science.

We know what else Indrasaurus ate because more Indrasaurus fossils have been found in the area, many of them so well preserved that its fossilized stomach contents have been preserved too. It ate mammals, birds, lizards, and fish—basically anything it could catch.

Another species that was similar to Indrasaurus, called Anchiornis, also called a four-winged bird-like dinosaur, was found with what appears to be a gastric pellet in its throat. The pellet contains the bones of more than one lizard and was probably ready to be horked up the way many carnivorous birds still regurgitate pellets made up of the indigestible parts of their prey, like bones, scales, and fur.

Consumulites aren’t limited to prey animals, either. A small armored dinosaur, a type of ankylosaur, called Kunbarrasaurus, which lived around 115 million years ago in what is now Australia, was a herbivore. The type specimen of the species, which was described in 2015, was incredibly well preserved—almost the entire skeleton, most of its body armor, and the contents of its stomach. Paleontologists can determine not just what kinds of plants it had eaten—which include ferns and seeds—but how it was processing its food. Most herbivorous dinosaurs swallowed leaves and other plant parts whole, then crushed the food in a powerful gizzard or gizzard-like organ along with rocks or grit. The rocks helped break up the plant material, and we have lots of these rocks associated with fossilized dinosaurs. The rocks are called gastroliths and are usually worn smooth. But Kunbarrasaurus didn’t have any gastroliths, and the plant material was so well preserved that researchers could see the cut ends of the plants where Kunbarrasaurus had bitten them. And all the pieces were small. Kunbarrasaurus therefore probably chewed its food, which meant it also probably had lips and cheeks of some kind to help keep the food in its mouth while it was chewing.

Another example of an animal with a consumulite that helped solve a mystery about its diet is Baryonyx. Baryonyx is a type of spinosaurid, a theropod dinosaur that grew at least 33 feet long, or 10 meters. It was discovered in 1983 in Surrey, England, and was described in 1986. It lived around 125 million years ago. It walked on its hind legs and probably used its arms to tear its prey into bite-sized pieces, because its first finger had a huge claw 12 inches long, or 31 cm.

But its skull was the real puzzle. Most theropods are meat-eaters, although a few evolved to eat plants. But Baryonyx had a long, relatively slender snout with a lot of close-growing teeth, and a sort of bulb at the end of its snout called a rosette. It looks more like the skull of a crocodilian called a gharial than a theropod. But as far as anyone knew when Baryonyx was discovered, there were no fish-eating theropods.

Until 1997, that is, when paleontologists studying Baryonyx spotted some overlooked details. In addition to a gastrolith in its belly area, they found some fish scales and teeth that showed evidence of being damaged by digestive acids. It probably hunted by wading through shallow water like a heron, catching fish and other animals with its long toothy snout.

It’s not just dinosaurs that are found with consumulites. Animals of all kinds eat all the time, so as long as the conditions are right to fossilize the remains of an animal, there’s a chance that whatever food was in the digestive tract might fossilize too. For instance, the same part of China that has yielded amazingly well preserved feathered dinosaurs has also produced other animals—including a carnivorous mammal called Repenomamus that grew more than three feet long, or one meter. I think we’ve talked about Repenomamus before, because we have evidence that it actually ate dinosaurs—at least baby ones, or it might have scavenged already dead dinosaurs. Either way, it lived around 125 million years ago and was shaped sort of like a badger with a long tail, although it wasn’t related at all to badgers or any other modern mammal. It probably laid eggs like monotremes still do. The reason we know what Repenomamus ate is because one specimen was found with pieces of a young Psittacosaurus in its stomach.

Rhamphorhynchus lived around 150 million years ago and was a type of pterosaur with a long tail. Its wingspan was about six feet across, or 1.8 meters. It mostly ate fish, which it probably caught not by flying down to grab fish out of the water, like eagles do, but by floating like a goose and diving for fish. It had large feet and short legs, which would have helped it take off from the water just like a goose.

A fish that lived at the same time as Rhamphorhynchus was called Aspidorhynchus, and it grew up to two feet long, or 60 cm. It had long jaws filled with teeth, with the upper jaw, or rostrum, extending into a pointy spike.

Another fish, Cimolichthys, lived around 75 or 80 million years ago and grew a little over six feet long, or two meters. Its body was heavily armored by large scutes and it had several rows of teeth. It may have been related to modern salmon. It lived in what is now North America and Europe, and ate fish and squid. We know it ate fish and squid because, of course, we have the remains of various last meals found with preserved fossil Cimolichthys. For instance, one specimen was found with the internal shell of a cephalopod lodged in its throat. Researchers suspect the fish had tried to swallow a Tusoteuthis that was too big to fit down its throat. The Tusoteuthis got stuck and blocked the flow of water over the fish’s gills, basically drowning it. Tusoteuthis, by the way, could possibly grow up to 36 feet long, or 11 meters, although that depends on whether it had long feeding tentacles like modern squid or not. If it didn’t have long feeding tentacles, it was probably only about 19 feet long, or 6 meters, which is pretty darn big anyway. I wouldn’t want to have to swallow that thing whole. Not even if it was deep-fried first.

Another fish called Xiphactinus, which grew up to 20 feet long, or 6 meters, lived in the late Cretaceous period. It died out at the same time as the non-avian dinosaurs. It had massive fangs and was a terrifying predator, but sometimes that backfires. The fossil of a 13 foot, or 4 meter, Xiphactinus was found with a 6 foot long, or 1.8 meter, fish called Gillicus inside it. Paleontologists think Xiphactinus swallowed its prey whole, which thrashed around so much inside it that it ruptured an organ and killed the predator fish. Both fish sank to the bottom of the shallow Western Interior Seaway in North America until it was discovered in 1952.

Let’s finish with two even more incredible fossils. In 2008 paleontologists found a fossilized freshwater shark they dated to 250 million years ago. Right before it died, it had eaten two animals called temnospondyls. Temnospondyls were common animals, with many species found throughout the world, and researchers still aren’t sure if they were the ancestors of modern amphibians or a similar type of animal that died out without any descendants. One of the temnospondyls that the shark ate had the well digested remains of a spiny fish in its stomach.

But a few years later researchers in Germany found something even better. It’s a fossilized snake called a Palaeopython, related to boas. It was about three feet long, or one meter, and was still young. If it had lived to grow up, it would have doubled in size. It lived in trees but also hunted along the edges of rivers and lakes. About 48 million years ago, this particular snake caught a lizard that’s related to modern basilisk lizards. It swallowed the lizard headfirst. But then the snake died, possibly asphyxiated by a cloud of carbon dioxide from the volcanic lake nearby. We have a lot of incredibly detailed fossils from that lake, known as the Messel Pit.

Researchers aren’t sure how the snake made it into the lake. Maybe it was already in the shallow water when it died, or on the bank, and a wave washed it into the water. Maybe the wave was actually what killed the snake, washing it into the lake where it drowned. However it died, it sank into deep water and was covered in sediment that preserved it. Then, 48 million years later, paleontologists found it.

When the fossil was cleaned and prepared for study, researchers found that the lizard was preserved inside it. But there was another surprise inside the lizard! Right before it had been eaten by the snake, the lizard had eaten an insect. And the insect was so well preserved that researchers could tell it had an iridescent exoskeleton.

If I was fossilized right now, paleontologists from the far future would find a lot of chocolate in my stomach. Happy holidays to everyone, whatever your reason for celebrating at this time of year!