This week let’s take a look at some animals (and other living organisms) that live the longest!

This isn’t Methuselah itself (scientists aren’t saying which tree it is, to keep it safe), but it’s a bristlecone pine: 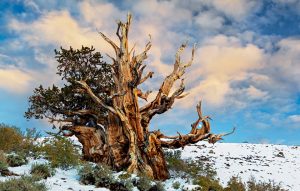 The Jaya Sri Maha Bodhi, a sacred fig tree in Sri Lanka, planted in 288 BCE by a king: 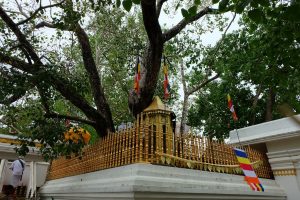 Some trees of the quaking aspen colony called Pando: 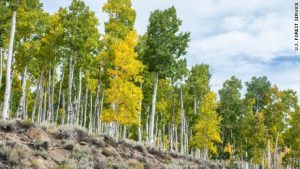 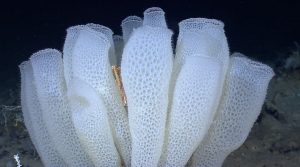 This week we’re going to look at the world’s longest lived animals and other organisms. We’re straying into plant territory a little bit here, but I think you’ll agree that this is some fascinating information.

The oldest human whose age we can verify was a French woman who lived to be 122 years old, plus 164 days. Her name was Jeanne Calment and she came from a long-lived family. Her brother lived to the age of 97. Jeanne was born in 1875 and didn’t die until 1997. But the sad thing is, she outlived her entire family. She had a daughter who died of a lung disease called pleurisy at only 36 years old—in fact, on her 36th birthday—and her only grandson died in a car wreck in his late 30s. Jeanne remained healthy physically and mentally until nearly the end of her life, although she had always had poor eyesight.

It’s not all that rare for humans to live past the age of 100, but it is rare for anyone to live to age 110 or beyond. But other animals have average lifespans that are much, much longer than that of humans.

In episode 163 we talked about the Greenland shark, which can live for hundreds of years. The oldest Greenland shark examined was possibly as old as 512 years old, and the sharks may live much longer than that. It’s actually the longest-lived vertebrate known.

No one’s sure which terrestrial vertebrate lives the longest, but it’s probably a tortoise. Giant tortoises are famous for their longevity, routinely living beyond age 100 and sometimes more than 200 years old. The difficulty of verifying a tortoise’s age is that to humans, tortoises all look pretty much alike and we don’t always know exactly when a particular tortoise was hatched. Plus, of course, we know even less about tortoises in the wild than we do ones kept in captivity. But probably the oldest known is an Aldabra giant tortoise that may have been 255 years old when it died in 2006. We talked about giant tortoises in episode 95.

But for the really long-lived creatures, we have to look at the plant world. The oldest individual tree whose age we know for certain is a Great Basin bristlecone pine called Methuselah. Methuselah lives in the Inyo National Forest in the White Mountains in California, which of course is on the west coast of North America. In 1957 a core sample was taken from it and other bristlecone pines that grow in what’s called the ancient bristlecone pine forest. Many trees show growth rings in the trunk that make a pattern that’s easy to count, so the tree’s age is easy to determine as long as you have someone who is patient enough to count all the rings. Well, Methuselah was 4,789 years old in 1957. It probably germinated in 2833 BCE. Other trees in the forest were nearly as old, with at least one possibly older, but the sample from that older tree is lost and no one’s sure where the tree the sample came from is.

Another bristlecone pine, called the Prometheus Tree, germinated even earlier than Methuselah, probably in 2880 BCE, but it’s now dead. A grad student cut it down in 1964, possibly by accident—stories vary and no one actually knows why he cut the tree down. The bristlecone pine is now a protected species.

In at least one case, a sacred fig tree in Sri Lanka, we know exactly when the tree was planted. A Buddhist nun brought a branch of the original sacred fig tree, the one that the Buddha was sitting under when he achieved enlightenment, to Sri Lanka and presented it to King Devanampiya Tissa. He planted the branch in the royal park in 288 BCE, where it grew into a tree which remains in the park to this day, more than 2,000 years later. It’s cared for by Buddhists monks and people come from all over Sri Lanka to visit the tree. If this sounds a little too good to be true, the easiest way to grow a sacred fig is to use a cutting from another tree. The cutting will root and grow into a new tree.

Not all trees are individuals. You may not know this and I didn’t either until recently. Some trees grow as colonies. The most well known tree colony is called Pando, made up of quaking aspens that live in Utah in North America. While the individual trees are only around 130 years old on average, Pando itself has been alive for an estimated 80,000 years. Each tree is a male clone and all the trees are connected by a root system that covers 106 acres, or 43 hectares. Because its root system is so huge and deep, Pando is able to survive forest fires that kill all other trees. Pando’s trees die, but afterwards the roots just send up shoots that grow into new trees. Researchers estimate that it’s been 10,000 years since Pando’s trees actually flowered. Unfortunately, Pando is currently threatened by humans stopping the forest fires that otherwise would kill off rival trees, and threatened by grazing livestock that kill off young trees before they can become established.

Pando isn’t the only quaking aspen colony known, though. There are a number of smaller colonies in western North America. Researchers think it’s an adaptation to frequent forest fires and a semi-arid climate that makes it harder for seedlings to grow. Quaking aspens that live in northeastern North America, where the climate is much wetter, grow from seeds instead of forming colonies.

Other species of tree form colonies too, including a spruce tree in Sweden whose root system dates to nearly 10,000 years ago and a pine colony in Tasmania that is about the same age but with individual trees that are themselves 3,000 years old. Not all long-lived plant colonies are trees, though. A colony of sea grass in the Mediterranean may be as much as 200,000 years old although it may be only 12,000 years old, researchers aren’t sure.

Many invertebrates that live in the ocean have long lifespans. Corals of various kinds can live for thousands of years, for instance. The ocean quahog, a type of clam that lives in the North Atlantic Ocean, grows very slowly compared to other clams. It isn’t fully mature until it’s nearly six years old, and populations that live in cold water can live a long time. Sort of like tree rings, the age of a clam can be determined by counting the growth rings on its shell, and a particular clam dredged up from the coast of Iceland in 2006 was discovered to be 507 years old. Its age was double-checked by carbon-14 dating of the shell, which verified that it was indeed just over 500 years old when it was caught and died. Researchers aren’t sure how long the quahog can live, but it’s a safe bet that there are some alive today that are older than 507 years, possibly a lot older.

But the invertebrate that probably lives the longest is the glass sponge. It’s found throughout the world’s oceans, but is especially common in cold waters of the Northern Pacific and Antarctic. It usually grows up to about a foot tall, or 30 cm, although some species grow larger, and is roughly shaped like a vase. Most species are white or pale in color. In some places the sponges fuse together to form reefs, with the largest found so far 65 feet tall, or 20 meters, and nearly four and a half miles long, or 7 km.

The glass sponge is a simple creature with a lattice-like skeleton made of silica covered with porous tissue. It anchors itself to a rock or the ocean floor, frequently in deep water, and as water flows through the openings in its body, it filters microscopic food out. So it basically lives a very slow, very plant-like existence.

One glass sponge, Monorhaphis chuni, anchors itself to the sea floor with a long basal spicule that looks like a stem. This stem can be over nine feet long, or 3 m. It needs to be long because it lives in deep water where there’s a lot of soft sediment at the bottom. In 1986 the skeleton of a dead Monorhaphis was collected from the East China Sea so it could be studied. Since a glass sponge adds layers of skeleton to its basal spicule every year as it grows, you guessed it, the layers can be counted just like tree rings—although it requires an electron microscope to count since the layers are very small. The sponge was determined to be about 11,000 years old when it died. Researchers are able to determine local ocean temperature changes from year to year by studying the rings, just as tree rings give us information about local climate.

Let’s finish with something called an endolith. An endolith isn’t a particular animal or even a group of related animals. An endolith is an organism that lives inside a rock or other rock-like substance, such as coral. Some are fungi, some lichens, some amoebas, some bacteria, and various other organisms, many of them single-celled and all of them very small if not microscopic. Some live in tiny cracks in a rock, some live in porous rocks that have space between grains of mineral, some bore into the rock. Many are considered extremophiles, living in rocks inside Antarctic permafrost, at the tops of the highest mountains, in the abyssal depths of the oceans, and at least two miles, or 3 km, below the earth’s surface.

Various endoliths live on different minerals, including potassium, sulfur, and iron. Some endoliths even eat other endoliths. We don’t know a whole lot about them, but studies of endoliths found in soil deep beneath the ocean’s floor suggest that they grow extremely slowly. Like, from one generation to the next could be as long as 10,000 years, with the oldest endoliths potentially being millions of years old—even as old as the sediment itself, which dates to 100 million years old.

That is way older than Jeanne Calment and all those trees.