This week let’s learn about a mystery panda and a few small panda mysteries! 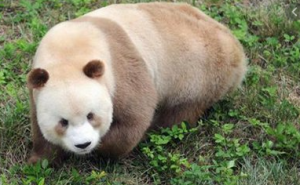 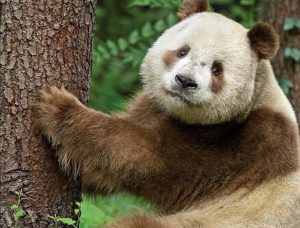 The giant panda is subtly different from the Qinling panda. Can you spot the difference? 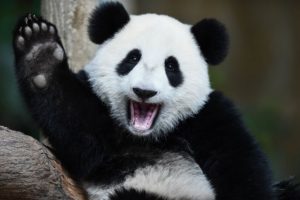 I usually like to shake things up from week to week, but April has turned into mammal month. We’ve got another interesting mammal this week, a panda that until recently was a mystery. But first! A quick correction from last week. Pranav emailed to let me know that I got infrasound and ultrasound mixed up. Tarsiers communicate and hear in ultrasound. Infrasound is below human hearing while ultrasound is above.

We’ve talked about the giant panda before in episodes 42 and 109. Pretty much everyone is familiar with the panda because it looks so cuddly. It’s a bear, but unlike every other bear it eats plants. Specifically, it eats bamboo, although it will also sometimes eat bird eggs and small animals. It’s mostly white but its ears are black, it has black patches around and just under its eyes, and its legs are black. It also has a strip of black around its body at about its shoulders.

But what if I told you there was another kind of panda that wasn’t black and white? I’m not talking about the red panda, which is not actually very closely related to bears. I’m talking about the Qinling panda.

The reason you’ve probably never heard of the Qinling panda is because until 2005, no one realized it wasn’t a regular panda with slightly different color fur. In 2005 a genetic study determined that the Qinling panda has been isolated from other pandas for at least 12,000 years and is different enough that it’s considered a subspecies of panda.

In 1989, before anyone realized the Qinling panda was a different subspecies, a female was captured as a mate for a captive giant panda. The pair had a baby who looked like an ordinary black and white panda cub, at least for the first four months of his life. At four months old his fur started to look more and more brown, until he was a brown and pale brown panda instead of a black and white panda. Unfortunately, the baby didn’t survive to grow up, and the mother panda died in 2000.

The Qinling panda lives in high elevations and eats bamboo, just like other pandas. Because there are so few of them, and because they’re hard to keep in captivity and hard to find in the wild, we still don’t know a whole lot about them. We do know that the Qinling panda tends to have more tooth problems than regular pandas, sometimes losing its teeth or just fracturing them. This may be due to inbreeding, but it may be genetic.

Now that I’ve told you that the Qinling panda has a different color coat than giant pandas, let me back that up a little. Not all Qinling pandas have brown fur. Most are black and white, although they may have a brown tinge to the coat. The brown pandas were first noticed in the 1960s and researchers worry that it’s a sign of inbreeding. Then again, the genetic studies done on Qinling pandas show a healthy amount of genetic diversity with little sign of inbreeding. The brown coloration might be due to other factors.

While we’re talking about panda coloration, why does the giant panda have such unusual markings? Even animals that are black and white aren’t patterned like the panda. I’m happy to report that the researcher who led the study that determined that zebras have black and white stripes to confuse biting flies, which we talked about in episode 149, seems to have solved the panda markings mystery too.

Because the panda’s diet is so low in calories and nutrition, it can never build up the kind of fat stores that other bears do. As a result, it doesn’t have fat reserves that would allow it to go dormant during the winter and sleep most of the time. The white fur helps hide it in snow during the winter. Adult giant pandas don’t have to worry too much about predators because they’re so big, up to a little more than six feet long, or 2 meters, but young pandas are vulnerable to snow leopards, eagles, black bears, and other predators. The black markings help break up the body’s pattern and help hide it in the bamboo forests where there’s lots of dappled shade.

But the giant panda’s black ears may actually help deter predators. Many animals signal aggression with their ears, and because the panda’s ears are large and black against its white-furred head, potential predators may perceive the panda as being aggressive.

All pandas have to travel sometimes long distances to find enough food to eat, and they need more than one species of bamboo. Some bamboo species contain more nutrients than others, while different species of bamboo sprout, flower, and die back at different times of the year. Female pandas will also sometimes wander widely to find a mate, although she will often return to her home territory to give birth.

You can find Strange Animals Podcast at strangeanimalspodcast.blubrry.net. That’s blueberry without any E’s. If you have questions, comments, or suggestions for future episodes, email us at strangeanimalspodcast@gmail.com. If you like the podcast and want to help us out, leave us a rating and review on Apple Podcasts or just tell a friend. We also have a Patreon at patreon.com/strangeanimalspodcast if you’d like to support us that way. Oh, and we have a mailing list sign-up now too!