Thanks to Molly for suggesting andrewsarchus and entelodont, our mean “piggies” we learn about this week!

Andrewsarchus (taken from article linked above): 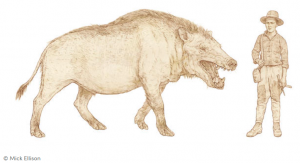 Andrewsarchus’s skull. I’m not sure who the guy holding it is, but I like to think his name is Andrew: 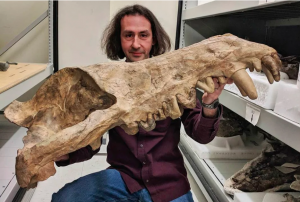 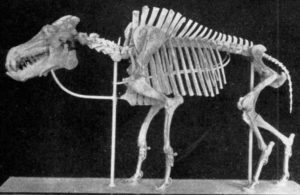 I’m getting really backed up on listener suggestions, so over the next few months I plan to cover as many of them as possible. We’ll start with two suggestions by Molly, who wanted to learn about Andrewsarchus and the related Entelodont. We talked about entelodonts briefly back in episode 116, and if you remember that episode, you may remember that entelodonts are sometimes referred to as the terminator pig or the hell pig. So yes, we are going to learn about some mean piggies this week, with a bonus fun mystery piggy at the end.

Andrewsarchus mongoliensis lived in what is now central Asia about 42 million years ago. It’s only known from a single skull found in 1923 in Inner Mongolia, which is part of China these days. The skull has a long snout and is big and wide, over 2.5 feet long, or 83 cm. It has huge, strong teeth that look ferocious.

When the skull was first found, some paleontologists on the team thought it was from a huge wolf-like carnivore. But others weren’t so sure. They thought it was the skull of a pig relative, and pigs are omnivores. Without more fossil remains, we can’t know for sure what Andrewsarchus’s body looked like, but these days scientists mostly think it was closely related to entelodonts.

Daeodon [DIE-oh-don] was the biggest entelodont known, and it may have stood up to 7 feet tall at the shoulder, or just over 2 meters. It lived in North America, but there was another species from Eurasia, Paraentelodon intermedium, that was probably close to the same size. Both lived about 22 million years ago.

Entelodonts had big, wide skulls with flared cheekbones and knob-like bony protrusions, so its head may have looked something like a warthog’s head. It also had cloven hooves. We don’t know if Andrewsarchus had hooves since we haven’t found anything but that one huge skull. The larger species of Entelodont had a humped shoulder something like a bison for the attachment of strong neck muscles to support the head’s weight, and Andrewsarchus probably had this too. The rest of the body was much more lightly built, with short, slender legs and a skinny little tail.

Even though Entelodont teeth are fearsome-looking, and at least some species of Entelodont were probably active hunters, they’re considered omnivores and Andrewsarchus probably was too. In fact, because Andrewsarchus was found on what was once a beach along the ocean, some researchers think it might have used its big forward-pointing front teeth to dig shellfish out of the sand. Most likely it ate pretty much anything it could find or catch, including shellfish, turtles, and other small animals, carrion, and plant material like fruit, nuts, and roots.

The teeth of some entelodont species show wear marks that indicate it probably bit through bones pretty frequently, possibly while scavenging already dead animals but possibly also when killing prey. One fossil skull of a herbivorous artiodactyl that lived in North America was found with an entelodont incisor embedded in it.

On the other hand, we have a set of fossil tracks in Nebraska, in the United States, that shows the behavior of what may have been an entelodont called Archaeotherium. Archaeotherium lived around 30 million years ago and grew up to 5 feet tall at the shoulder, or 1.5 meters, although most specimens found were closer to 4 feet tall, or 1.2 meters. The fossil tracks are from three animals: a type of rhinoceros, a predator of some kind, possibly the hyena-like Hyaenodon, and a species of Archaeotherium. The rhinoceros tracks show that it was walking along, then suddenly took off at a run. The Hyaenodon tracks are nearby and possibly indicate pursuit of the rhino, or it might have just happened to be nearby and frightened the rhino. The Archaeotherium tracks, meanwhile, zigzag back and forth. What on earth is going on with that?

Entelodonts had a very good sense of smell, much like pigs do, and walking in a zigzag pattern would allow Archaeotherium to smell things more efficiently. Some researchers suggest it might have been keeping an eye on the rhino hunt, and that if the Hyaenodon managed to bring down its prey, Archaeotherium might have decided to chase Hyaenodon away from its kill. It might also have been waiting for one or both animals to become tired, and then it could attack. Then again, it might just have been looking for some yummy fruit to eat. While some places online will tell you Archaeotherium was hunting the rhino, that’s not what the tracks indicate.

Entelodonts could open their mouths really, really wide. If you’ve ever seen a hippo with its humongous mouth open, that’s what we’re talking about here. Male hippos sometimes fight by jaw-wrestling each other, and researchers think entelodonts might have done something similar. A lot of entelodont skulls show healed puncture wounds in places consistent with jaw-wrestling. The knobby protrusions on its skull might have been an adaptation to this behavior, with thickened skin over them to keep a rival’s teeth from biting too deeply. This is the case with some pigs with similar skull protrusions, which we talked about in episode 128. The head bite wounds are only seen in adult animals, and younger animals didn’t have the massive cheek and jaw muscles seen in adults.

The big question is whether Andrewsarchus was actually an entelodont or just closely related to the entelodonts. That’s the same thing paleontologists have been discussing for the last century. Until we find more Andrewsarchus fossils, though, there’s only so much we can determine about the animal, including how similar it was to the entelodonts. For instance, while entelodonts did have cloven hooves, the two halves of the hoof could spread apart like fingers, which is similar to the way camel feet are structured. This would have helped it walk on soft ground, like sand or mud. If Andrewsarchus turns out to have similar feet, it was probably an entelodont.

Finding more Andrewsarchus remains will allow us to get a good idea of how big it could grow, too. Estimates based on the same proportions seen in entelodonts suggest it might have stood about 6 feet tall at the shoulder, or 1.8 meters.

As we’ve established, entelodonts and Andrewsarchus weren’t actually pigs, although they probably looked a lot like weird oversized warthogs with some features seen in wild boars. There’s no evidence they had a pig-like snout, called a nasal disk, which is flattened at the end. Entelodonts had nostrils on the sides of the snout, something like a horse’s nostrils.

But let’s finish with an actual pig, the mystery of the sewer pig. I got this information from a fantastic book called Dark Folklore by Mark and Tracey Norman, and I read the book because I listen to The Folklore Podcast, which is by folklorist Mark Norman, although I think Tracey Norman helps out with it too. I’ll just quote from the book, and definitely check the show notes for a link if you want to order your own copy.

“Foreshadowing the 1980s panic about baby alligators being taken home as pets and subsequently flushed down the toilet into the sewer system of New York, 1859 London was overtaken by a panic about the Sewer Pigs of Hampstead.

“The sewer pigs were thought to be a monstrous porcine family living entirely below ground in the London sewer system, and even featured in the Daily Telegraph newspaper. A sow had apparently become trapped, it was said, and had given birth to a litter of piglets, the entire family living off the rubbish that accumulated in the sewers and producing litter after litter. The population lived in fear of these terrible creatures escaping from the sewer system and running riot throughout London.

“Obviously, there is nothing within a sewer system that would sustain a pig, let alone a number of them. The fear connected to this particular urban legend is disease and it arose after the hot summer of 1858 caused a devastating outbreak of typhoid and cholera in the city. Unsurprisingly, there has never been any evidence of pigs in London’s sewers, monstrous, lost or otherwise.”