Thanks to Richard from NC for his suggestion that leads us to learn about some interesting seals! 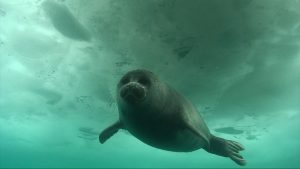 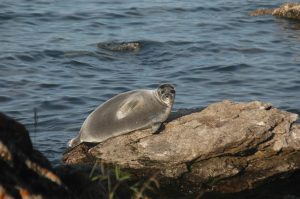 The Baikal seal’s teeth have teeth: 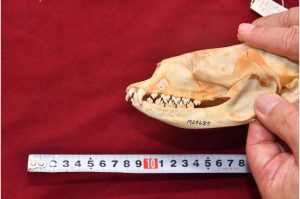 A Weddell seal mama with her pup who seems to be practicing singing: 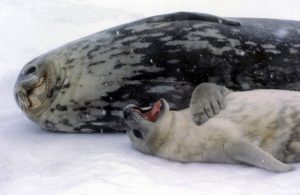 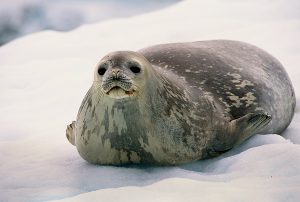 The bearded seal. Can you tell where its name comes from? (Moustachioed seal might be more accurate.) (Also, note the ear opening with no external ear flap.) 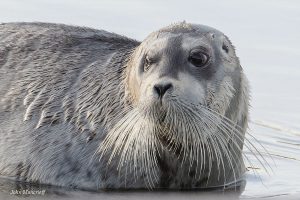 This week let’s learn about some interesting seals. Thanks to Richard from NC who suggested freshwater seals, which is where we’ll start.

Most seals live on the coast and spend most of the time in the ocean. But there’s one species of seal that lives exclusively in fresh water. That’s the Baikal [bay-CALL] seal, and the only place it lives is a big lake in Siberia called Lake Baikal.

Lake Baikal formed where two sections of the earth’s crust are being pulled apart by continental drift. That’s called a rift lake or rift valley lake. The lake gets bigger every year, but only by a tiny amount—just under an inch, or 2 cm. Since this has been going on for an estimated 25 to 30 million years, though, it’s an extremely big, deep lake. It is, in fact, the deepest lake on earth, and is also the oldest lake on earth. It’s more than twice as old as Lake Tanganyika in East Africa, which is also a large, deep rift lake but only about 12 million years old at the most.

Lake Baikal is almost 400 miles long, or 636 km, and nearly 50 miles wide, or 80 km. At its deepest point, it’s 3,893 feet deep, or 1,186.5 meters. That’s from the surface of the water to the muddy bottom. But that mud and sediment on the bottom has been building up for a very long time and there’s a lot of it—4.3 miles of it, in fact, or 7 km. The water is very clear and very oxygenated, but the surface freezes for several months out of the year. Then again, there are some hydrothermal vents, especially in the deepest areas, that heat the water around them to 122 degrees Fahrenheit, or 50 Celsius.

Because Lake Baikal is so deep, so big, so oxygenated, and so old, lots of species of animal live in and around it that live nowhere else in the world. That includes the Baikal seal.

The Baikal seal is related to the Arctic ringed seal but has lived in the lake exclusively for probably two million years. It only grows five and a half feet long at most, or 1.65 meters, and is usually closer to four feet long, or 1.2 meters. It’s gray in color and has no external ears, so that its head appears smooth. It can still hear, but because it doesn’t have ears sticking out of its head, it’s more streamlined than seals with external ears. It has large eyes, a pair of front flippers that it uses to maneuver in the water and on land, and a pair of hind flippers that act like a tail instead of legs.

That’s actually the main difference between earless and eared seals. Earless seals are more streamlined in general and more adapted for life in the water and for deep diving, but they’re awkward on land because they can’t use their hind limbs for walking. Eared seals have little flaps of external ears and while their hind flippers act as a tail in the water, the seal can turn its hind flippers over to walk on them on land.

The Baikal seal is quite small for a seal, which keeps it from needing as much food as a bigger animal. For a long time people thought the Baikal seal mostly ate fish, but a study published in late 2020 determined that it eats a whole lot of amphipods. Lake Baikal is home to a species of amphipod that grows up to about 10 millimeters long. Amphipods are a type of crustacean and all other freshwater amphipods known are bottom-dwellers. Only the Lake Baikal amphipod is free-floating.

The seal catches these tiny amphipods by sucking them up in a big mouthful of water, closing its teeth tightly, and using its tongue to force the water out through its teeth. The amphipods get caught against the teeth and the seal swallows them, yum. This is a type of filter feeding used by some other species of seal too, including the crabeater seal. Like the crabeater seal, it’s so well adapted to filter feeding that it has specialized teeth with curved projections all around their edges. These projections interlock closely when the seal closes its mouth. Because it doesn’t have to depend on eating fish, the Baikal seal isn’t threatened by commercial fishing. As long as it has plenty of amphipods to eat, it’s happy.

While the Baikal seal is the only truly freshwater seal species, a subspecies of ringed seal lives in a lake in Finland. Unlike the Baikal seal, though, which are numerous and doing just fine, the Saimaa ringed seal is endangered, with only around 400 individuals left in the wild. They’re strictly protected these days, fortunately, and the population is growing after it reached a low of only about 100 animals in 1983.

During the Pleistocene, the land mass that is now Finland was pressed down by the weight of glaciers. Once the glaciers melted, the land began to slowly rise back up until the lake where a population of ringed seals lived was cut off from the ocean.

Some other seals live in lakes that are cut off from the sea, including a population of harbor seals in Iliamna Lake in Alaska and a subspecies of harbor seal in northern Quebec, Canada, but let’s move on to seals that live in the ocean instead of fresh water.

Specifically, let’s discuss two earless seals that make interesting sounds. You may think you know what a typical seal sounds like, such as this kind of barking call:

That’s actually not a seal but a closely related pinniped called a sea lion. Even though it’s not a seal, it is sort of technically a seal because it shares a family with fur seals and walruses, Otariidae, also called the eared seals that we talked about earlier. Some seals bark like sea lions and make lots of other noises, but it’s the earless seals that can really make weird sounds.

For instance, listen to this eerie sound:

That’s not a whale, it’s a seal. The Weddell seal lives around Antarctica and can grow quite large, up to 11 ½ feet long, or 3.5 meters. Males and females look alike although females tend to be slightly larger. It eats fish, squid, crustaceans, and pretty much anything else it can catch. It dives deeply and can stay underwater for up to 80 minutes, and while it has good eyesight, it doesn’t need to see to find food. The whiskers on its snout are incredibly sensitive and can sense tiny movements of water that indicate exactly where a fish or other animal is swimming.

Both male and female Weddell seals make various vocalizations, including some that can be described as songs, although the songs seem to be rare and researchers aren’t sure what the seals communicate with them. There’s still a lot we don’t know about these seals. Because Antarctica is so far away from most human activity, it’s extremely quiet most of the time. The seals can hear each other without having to compete with the noise from cars and boats and things like that. A seal sitting on the ice can hear other seals calling from deep in the water below the ice, and in fact the ice can amplify the sounds so well that scientists living in the Antarctic report being able to feel the sounds as well as hear them.

Here’s another clip of Weddell seals. These sounds are taken from an amazing youtube video I’ve linked to in the show notes. It’s short and has two scientists talking a little bit about their experiences hearing the seals, and then there’s about a minute of seal calls afterwards.

Another seal with a loud, amazing vocalization is the bearded seal. It lives on the other side of the world from the Weddell seal, in the Arctic Ocean, and can grow almost nine feet long, or 2.7 meters. It eats fish and squid but mostly eats animals that live on the sea floor, including clams, polychaete worms, sea anemones, and many others. Like the Weddell seal and many other seals, its whiskers are incredibly sensitive. The bearded seal uses its long whiskers to feel around in the soft mud at the bottom of the ocean, looking for food.

In the spring, male bearded seals sing loudly and rhythmically, either to attract a mate or to defend a territory, or maybe both or something else—we don’t know. This is what the bearded seal sounds like underwater. I grabbed this audio off Wikipedia if you need to listen to it on repeat for a very long time. It’s an incredible sound.

This is what a bunch of bearded seals sound like when they’re singing together. This audio was taken on land although the seals sing underwater.

These vocalizations sound so much like whale calls that I wondered if some seals can echolocate the way whales and dolphins can. There are quite a few studies into this topic, but right now most of the evidence points to no, seals don’t use echolocation to navigate underwater. Of course, studies in the future might discover something new about potential echolocation in seals. It’s only been very recently that sophisticated studies on bats have discovered that many species use different types of echolocation.

Conclusions of a two-year study published at the very end of 2020 show that a lot of Weddell seal vocalizations are ultrasonic, meaning they’re much higher than humans can hear. While the study doesn’t show any evidence of echolocation, they weren’t actually looking for it either. So you never know.

It’s possible, of course, that even if seals don’t echolocate right now, they might one day evolve the ability. Earless seals are well adapted to the water but still spend part of the time on ice or on land, especially to give birth. Many millions of years from now, the descendants of today’s seals might be completely aquatic the way whales and dolphins are. Because most scientists today think that seals can’t echolocate because their ears need to be useful on land as well in water, a fully aquatic seal that doesn’t need to hear well in the air might then develop echolocation to help it navigate underwater.

I’ll do a follow-up episode about seals and echolocation in a few million years when we can determine whether that’s happening.