This week we learn about some weird worms!

Underground giant glows in the dark but is rarely seen 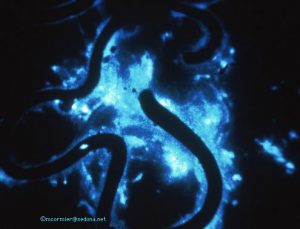 This sea worm’s head is on the left, its many “butts” on the right [photo from article linked to above]: 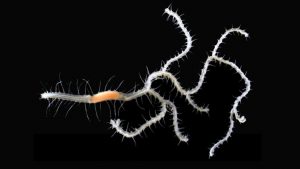 A North Auckland worm [photo from article linked to above]: 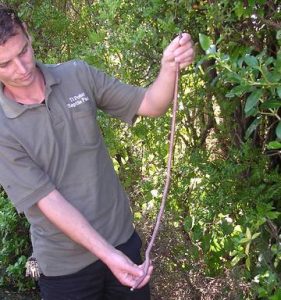 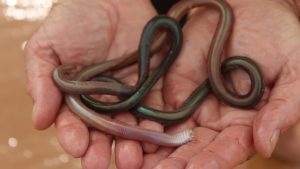 This week we continue Invertebrate August with a topic I almost saved for monster month in October. Let’s learn about some weird worms!

We’ll start with a newly discovered worm that’s very tiny, and we’ll work our way up to larger worms.

Mono Lake in California is a salty inland lake that probably started forming after a massive volcanic eruption about 760,000 years ago. The eruption left behind a crater called a caldera that slowly filled with water from rain and several creeks. But there’s no outlet from the lake—no river or even stream that carries water from the lake down to the ocean. As a result, the water stays where it is and over the centuries a lot of salts and other minerals have dissolved into the lake from the surrounding rocks. The water is three times as salty as the ocean and very alkaline.

No fish live in the lake, but some extremophiles do. There’s a type of algae that often turns the water bright green, brine shrimp that eat the algae, some unusual flies that dive into the water encased in bubbles, birds that visit the lake and eat the brine shrimp and flies, and eight species of worms that have only been discovered recently. All the worms are weird, but one of them is really weird. It hasn’t been described yet so at the moment is just going by the name Auanema, since the research team thinks it probably belongs in that genus.

Auanema is microscopic and lives throughout the lake, which is unusual because the lake contains high levels of arsenic. You know, a DEADLY POISON. But the arsenic and the salt and the other factors that make the lake inhospitable to most life don’t bother the worms.

When some of the worms were brought to the laboratory for further study, they did just fine in normal lab conditions, without extreme levels of arsenic and so forth. That’s unusual, because generally extremophiles are so well adapted for their extreme environments that they can’t live anywhere else. But Auanema is just fine in a non-harsh environment. Not only that, but the team tested other species in the Auanema genus that aren’t extremophiles and discovered that even though they don’t live in water high in arsenic, they tolerate arsenic just as well as the newly discovered species.

The team’s plan is to sequence Auanema’s genome to see if they can determine the genetic factors that confer such high resistance to arsenic.

Next, we go up in size from a teensy worm to another newly discovered worm, this one only about 4 inches long at most, or 10 cm. It’s a marine polychaete worm that lives inside sea sponges, although we don’t know yet if it’s parasitizing the sponge or if it confers some benefit to the sponge that makes this a symbiotic relationship. The worm was only discovered in 2019 near Japan and described in early 2022 as Ramisyllis kingghidorahi.

Almost all worms known are shaped, well, like worms. They have a mouth at one end, an anus at the other, and in between they’re basically just a tube. Ramisyllis is one of only three worms known that have branched bodies, which is why they’re called branching sea worms. In this case, Ramisyllis has a single head, which stays in the sponge, but its other end branches into multiple tail ends that occasionally break off and swim away. The tails are specialized structures called stolons. When a stolon breaks off, it swims away and releases the eggs or sperm it contains into the water before dying. The worm then regenerates another stolon in its place.

Ramisyllis’s branches are asymmetrical and the worms found so far can have dozens of branches. Its close relation, a species that lives in sponges off the coast of northern Australia, can have up to 100 branches. Researchers suspect that there are a lot more species of branching sea worms that haven’t been discovered yet.

Next, let’s head back to land to learn about a regular-sized earthworm. There are quite a few species across three different earthworm families that exhibit a particular trait, found in North and South America, Australia and New Zealand, and parts of Africa. A few species have been introduced to parts of Europe too. What’s the trait that links all these earthworms? THEY CAN GLOW IN THE DARK.

Bioluminescent earthworms don’t glow all the time. Most of the time they’re just regular earthworms of various sizes, depending on the species. But if they feel threatened, they exude a special slime that glows blue or green in the dark, or sometimes yellowish like firefly light. The glow is caused by proteins and enzymes in the slime that react chemically with oxygen.

Researchers think that the light may startle predators or even scare them away, since predators that live and hunt underground tend to avoid light. The glow may also signal to predators that the worm could taste bad or contain toxins. The light usually looks dim to human eyes but to an animal with eyes adapted for very low light, it would appear incredibly bright.

One bioluminescent earthworm is called the New Zealand earthworm. It can grow up to a foot long, or 30 cm, although it’s only about 10 mm thick at most, and while it’s mostly pink, it has a purplish streak along the top of its body (like a racing stripe).

Like other earthworms, the New Zealand earthworm spends most of its time burrowing through the soil to find decaying organic matter, mostly plant material, and it burrows quite deep, over 16 feet deep, or 5 meters. If a person tried to dig a hole that deep, without special materials to keep the hole from collapsing, it would fall in and squish the person. Dirt and sand are really heavy. The earthworm has the same problem, which it solves by exuding mucus from its body that sticks to the dirt and hardens, forming a lining that keeps the burrow from collapsing. This is a different kind of mucus than the bioluminescent kind, and all earthworms do this. Not only does the burrow lining keep the worm safe from being squished by cave-ins, it also contains a toxin that kills bacteria in the soil that could harm the worm.

Worms that burrow as deep as the New Zealand earthworm does are called subsoil worms, as opposed to topsoil worms that live closer to the surface. Topsoil contains a lot more organic material than subsoil, but it’s also easier for surface predators to reach. That’s why topsoil worms tend to move pretty fast compared to subsoil worms.

The New Zealand earthworm glows bright orange-yellow if it feels threatened, so bright that the Maori people used the worm as bait when fishing since it’s basically the best fish lure ever.

Another New Zealand earthworm is called the North Auckland worm, and while it looks like a regular earthworm that’s mostly pink or greenish, it’s also extremely large. Like, at least four and a half feet long, or 1.4 meters, and potentially much longer. It typically lives deep underground in undisturbed forests, so there aren’t usually very many people around on the rare occasion when heavy rain forces it to the surface. Since earthworms of all kinds absorb oxygen through the skin, instead of having lungs or gills, they can’t survive for long in water and have to surface if their burrow completely floods.

An even bigger worm is the giant beach worm. It’s a polychaete worm, not an earthworm, and like other polychaete worms, including the branching sea worm we talked about earlier, it has a segmented body with setae that look a little like legs, although they’re just bristles. The giant beach worm’s setae help it move around through and over the sand. It hides in a burrow it digs in the sand between the high and low tide marks, but it comes out to eat dead fish and other animals, seaweed, and anything else it can find. It has strong jaws and usually will poke its head out of its burrow just far enough to grab a piece of food. It has a really good sense of smell but can’t see at all.

There are two species of giant beach worm that live in parts of Australia, especially the eastern and southeastern coasts, where people dig them up to use as fish bait. The largest species can grow up to 8 feet long, or 2.4 meters, and possibly even longer. There are also two species that live in Central and South America, although we don’t know much about them.

Another huge Australian worm is the endangered Giant Gippsland earthworm that lives in Victoria, Australia. It’s also a subsoil worm and is about 8 inches long, or 20 cm…when it’s first hatched. It can grow almost ten feet long, or 3 meters. It’s mostly bluish-gray but you can tell which end is its head because it’s darker in color, almost purple. It lives beneath grasslands, usually near streams, and is so big that if you happen to be in the right place at the right time on a quiet day and listen closely, you might actually hear one of the giant worms moving around underground. When it moves quickly, its body makes a gurgling sound as it passes through the moist soil in its burrow.

The Giant Gippsland earthworm is increasingly endangered due to habitat loss. It also reproduces slowly and takes as much as five years to reach maturity. Conservationists are working to protect it and its remaining habitat in Gippsland. The city of Korumburra used to have a giant worm festival, but it doesn’t look like that’s been held for a while, which is too bad because there aren’t enough giant worm festivals in the world.

To finish us off, let’s learn what the longest worm ever reliably measured is. It was found on a road in South Africa in 1967 and identified as Microchaetus rappi, or the African giant earthworm. It’s mostly dark greenish-brown in color and it looks like an earthworm, because it is an earthworm. On average, this species typically grows around 6 feet long, or 1.8 meters, which is pretty darn big, but this particular individual was 21 feet long, or 6.7 meters. It’s listed in the Guinness Book of World Records as the longest worm ever measured. Beat that, other worms. I don’t think you can.