Thanks to Sam for this week’s topic suggestion and animal suggestions! This week we’re looking at some animals that just look…weird? And wrong? And not what you expect? 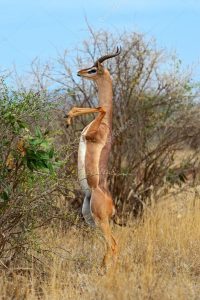 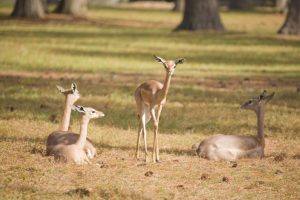 And the Tibetan fox: 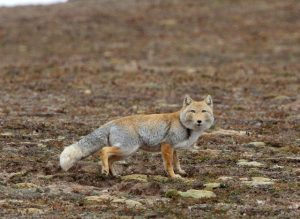 And the maned wolf:

And the proboscis monkey: 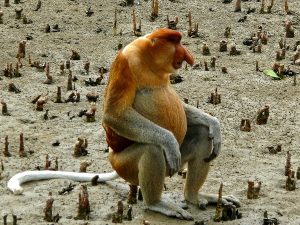 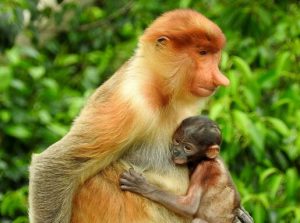 And the bald uakari: 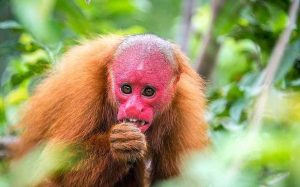 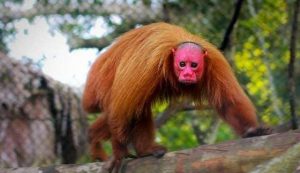 Shani the baby gerenuk (so cute!)

This week the theme and many of the animals we’ll cover are a suggestion by Sam. We were chatting on Twitter earlier this week and they linked me to an animal called the gerenuk, and it was just all weird from there. So thank you to Sam who jumpstarted what has turned out to be a really fun episode, Animals That Look Wrong.

The gerenuk is an antelope, but not one that I’d ever heard of before. My life is better now that I know it exists. It lives in East Africa and is a member of its own genus, but is probably most closely related to the springbok.

The gerenuk is a slender antelope that grows around three and a half feet tall at the shoulder, or 105 cm. It has a very long neck and long thin legs, and the male has a pair of black horns that can grow around 18 inches long, or 45 cm. It’s reddish-brown on the back and lighter on the belly, with a pale stripe across its sides. It also has a white patch around each eye that makes its large eyes look even bigger. Its tail is short.

This doesn’t sound too weird, right? It’s just a small, slender antelope. But the gerenuk’s legs are really remarkably thin, even for an antelope. They’re practically like sticks with hooves, especially the front legs. The gerenuk stands on its hind legs and stretches its neck upward to reach leaves that other animals can’t, and it uses its front legs to help it pull branches down closer to its mouth. This means that it sometimes folds its long, incredibly thin legs in ways that look like it shouldn’t be possible.

The gerenuk usually lives in small groups of maybe half a dozen animals at most. Usually a group is either all males or all females, and each group has a small territory. The territory of a female group will overlap with the territories of male groups. The female gerenuk can have a baby at any time of the year instead of having a particular birthing season. Male calves stay with their mothers longer than females, so if a gerenuk has a male calf she won’t have another baby for two years, but if she has a female calf she will usually have another baby the following year. The gerenuk lives in fairly dry areas and eats all kinds of plants, although it prefers acacia.

Just think of them out there right now, gerenuks folding their impossibly thin legs back so far you would swear they were part grasshopper. They’re eating acacia leaves right now while you listen to me talk about them. It’s blowing my mind. Perhaps I have been in quarantine too long.

Okay, moving on. Next up is the Tibetan fox. This is not the same animal as the Corsac fox we talked about in our bonus Mongolian episode a few weeks ago, even though the Corsac fox is sometimes called the Tibetan fox, and sometimes both animals are called sand foxes. The Tibetan fox is a species of fox that lives in semi-arid grasslands in high altitudes in Tibet, parts of China, and surrounding areas. It’s brown and gray with a brushy tail like other foxes, although it has relatively short legs.

When you get a mental picture of a fox, you probably think of the common red fox with a long, slender muzzle. But the Tibetan fox does not look like this. Sam referred to it as the fox that looks like it got stung on the face by a bee, and that’s a really good description. It has a large, blocky head with a short, thick muzzle and yellow eyes that see you and immediately dismiss you as unworthy.

The Tibetan fox mostly eats pikas, a rodent-like mammal common throughout its range, but it also eats other small animals like marmots and hares. It’s usually a solitary animal but mated pairs may hunt together. It also sometimes follows brown bears that are also hunting pikas. The bear digs up pika burrows, but sometimes the pika escapes. When it does, the fox will grab it instead. Because the Tibetan fox is so dependent on the pika for most of its diet, conservationists are worried that farmers are increasingly poisoning pikas, which they consider pests. The fox is not considered endangered right now, though, and hopefully farmers will start using other methods of pest control instead of poisoning.

Next up is another canid, the maned wolf. We’ve talked about it before in episode 80, and it is definitely weird-looking. Imagine a wolf. Now, imagine a wolf with legs twice as long as usual. Now, make it reddish with black legs and a ruff of black fur down its neck, a short white-tipped tail, and a long muzzle. If you’re thinking that this wolf looks more like a fox with really long legs and a short tail, you’re right. But it’s not a wolf and it’s not a fox. Like the gerenuk, the maned wolf is the only member of its own genus.

So why does the maned wolf have such long legs? It lives in the grasslands of central and eastern South America, especially Brazil, and its long legs are an adaptation to see over the tall grass. It stands around three feet tall at the shoulder, or 90 cm, but has small feet in comparison to its size. It’s usually a crepuscular animal, active around dawn and dusk, and is generally solitary. It’s an omnivore and eats quite a bit of plant material, especially a tomato-like fruit called the wolf apple. It will also eat carrion and any small animals it can catch, sometimes burying dead animals that it can’t eat right away. When it buries a dead animal, it will mark the spot with urine so it can find it more easily later.

That brings us to the maned wolf’s smell. It marks its territory with urine, and its urine has a really strong odor, which is why the maned wolf is sometimes called the skunk wolf. And it smells like cannabis. The chemical in maned wolf urine that makes it smell so strongly is called pyrazine, which is used by many animals and plants to indicate that they’re toxic. It’s likely that having so much of the chemical in its urine helps keep other animals away from its territory, since they interpret it as a warning signal. In 2006 someone at the Rotterdam Zoo in Holland complained that people were smoking marijuana in the zoo, but when police investigated they discovered that the smell was actually coming from the maned wolf exhibit.

This is what the maned wolf sounds like. The sound is called a roar-bark but honestly it just sounds like a big dog barking if you ask me:

Next let’s look at two monkeys, one from Asia and one from South America. We don’t talk about monkeys often enough on this podcast.

The proboscis monkey is an endangered animal from Borneo in southeast Asia. It’s a big monkey and a big male can weigh more than 65 pounds, or around 30 kg. Females are generally much smaller. It has long fur that can range from orange or yellowish to brown or gray. A baby proboscis monkey has a blue face that darkens to gray after a few months, but as it grows up, the baby’s face turns cream-colored like adult faces. But this isn’t the weird part about the proboscis monkey. Not even the fact that some of its toes are webbed is the weird part. Nope, it’s the monkey’s nose that’s just so weird-looking. Most monkeys have little noses, but the proboscis monkey has a really big nose. The male’s nose is bigger than the female’s and is so long and bulbous that it hangs down below the mouth. The female’s nose is more pointy. Researchers aren’t sure why the monkey has such a big nose but suggest it might help the male make louder honking noises to attract females.

The proboscis monkey also has a pot belly like many monkeys do, since it mostly eats leaves and leaves require a lot of digestion. It even chews its cud. It has a long tail and mostly stays in trees.

Proboscis monkeys live in family groups, often one male with several females and their babies, but the family groups spend time with other family groups to socialize. The different groups gather together at night to sleep in one big group. Sometimes the male of a family group will leave and be replaced by another male, which usually happens without too much drama. A female occasionally leaves to join another group, and young males who don’t have mates will sometimes form bachelor groups. For the most part proboscis monkeys are pretty chill and not very aggressive.

With its pot belly and big nose, after the first European settlers arrived in Borneo, the locals started calling the monkey the orang belanda. That means “Dutchman.” Sorry if you are Dutch, but there it is. Also, it’s weird that I’ve mentioned Holland twice in the same episode about totally different animals.

Our last animal this week is another monkey, the bald uakari [pronounced wakari], a rare monkey that lives in the Amazon rainforest in South America. It’s threatened by habitat loss, especially deforestation. Females only have one baby every two years.

The bald uakari has long fur over its body, usually brown but sometimes black or blond, but its head is bald, which is where it gets its name. It has a short furry tail that looks like a big round poof and it’s a much smaller animal than the proboscis monkey, only a little larger than a cat. It lives in small groups that travel around their territory to find food, mostly seeds, nuts, and unripe fruit, which it bites open with its strong jaws and teeth. It has a normal monkey nose.

So, picture the bald uakari in your mind. Small brown monkey with long fur and a bald head. Did you picture it with a BRIGHT RED FACE? No? Well, it has a bright pinky-red face, like it saw a can of red paint and thought, I’d like that on my entire face.

So why does the bald uakari have a red face? It’s not because of a particular pigment in the skin, it’s actually due to a lack of pigment. The skin of its face is thin and unpigmented, but contains lots of small blood vessels. The red color actually comes from the blood that’s visible through the skin. Monkeys with bright red faces are healthy, which means they’re attractive as mates. Monkeys that aren’t healthy have much paler faces, especially if the monkey has malaria. Most bald uakari monkeys are naturally immune to malaria, but not all of them.

So if anyone ever razzes you about a haircut or a shirt you’re wearing or anything else, just remember these awesome animals that don’t look like what people expect. They might not fit into the mental category we have for a particular type of animal, but they’re all really awesome, and so are you.