Thanks to Nathan for his suggestions! This week we’re going to learn about three strange and interesting fish! 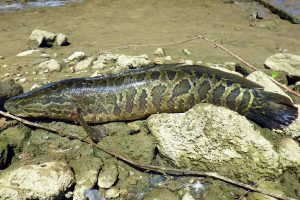 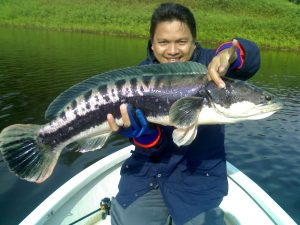 A Greenland shark, fish of mystery: 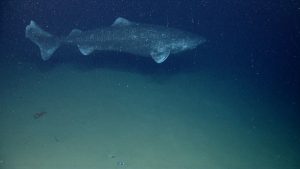 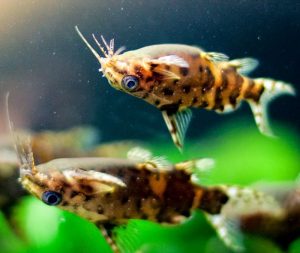 An ancient Egyptian upside-down catfish pendant that ladies wore in their hair: 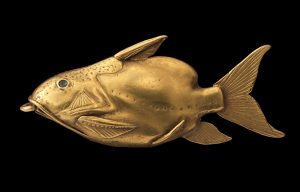 We haven’t done a fish episode in a while, so this week let’s learn about three weird fish. Thanks to Nathan for suggesting the first two fish, the snakehead and the Greenland shark.

The snakehead is a freshwater fish that gets its name because while it’s an ordinary-looking fish for the most part, it has a flattened head that looks a little bit like a snake’s. Different species of snakehead look different in other ways, of course, so let’s examine a couple of typical species.

The northern snakehead is native to Asia, but it’s been introduced into other parts of the world by accident or as a food fish. It’s one of the largest species, with reports of some specimens growing up to five feet long, or 1.5 meters. It’s usually no more than three feet long, though, or 1 meter. It’s brown with darker blotches and has sharp teeth that it uses to catch fish, frogs, and other small animals.

Like other snakeheads, the northern snakehead can breathe air and survive out of water for several days as long as it stays damp. Young snakeheads can even wriggle considerable distances on land to find water. It likes stagnant or slow-moving water.

Because it’s a fierce predator that can find its way to new waterways, introduced snakeheads are invasive species that can cause havoc to populations of native fish. The northern snakehead has been introduced into many waterways in the United States in the last twenty years, as a result of people releasing unwanted aquarium fish and accidental release of snakeheads in fish-farming operations. Since snakeheads reach mature age quickly and females can lay thousands of eggs at a time, snakeheads are illegal to own in many places now and release snakeheads into the wild is even more against the law.

The giant snakehead also grows up to five feet long, or 1.5 m, and is from parts of southeast Asia. Young giant snakeheads are red, but when they grow up they’re black and white with a thick black stripe down each side. It’s also been introduced into a lot of places as a food fish and a game fish, but since it’s a tropical species it can’t survive colder weather and isn’t as invasive as a result, at least not outside of tropical and subtropical areas.

The giant snakehead can be aggressive, though, especially when it’s guarding its nest. Both parents act as guards of the eggs and the newly hatched babies, which follow their mother around wherever she goes. That’s actually really cute.

Next let’s talk about the Greenland shark. We covered it briefly in episode 74, about colossal squid and the things that eat them, but mostly we talked about its close relative the sleeper shark. The Greenland shark is similar in some ways but it’s much bigger than the sleeper shark. It lives in the North Atlantic and Arctic Oceans where the water is barely warmer than the freezing point and it grows up to 24 feet long, or 7.3 meters, with females being larger than males.

But despite how enormous it is, it’s not a shark you need to worry about. First of all, what are you doing swimming in water that cold? Second, the Greenland shark is a slow swimmer, no more than about 1 ½ miles per hour, or 2.6 km/h. You can walk faster than that without even trying. You can probably dog-paddle faster than that.

And yet, the Greenland shark manages to eat seals and fish and other animals that move quickly. Since no one’s actually observed a Greenland shark hunting, no one knows how they catch prey. Some researchers speculate that it sneaks up on sleeping seals and grabs them. It also eats a lot of carrion, including dead moose and reindeer and polar bears that fall into the water and drown. One shark was found with an entire reindeer in its stomach.

The Greenland shark spends winter in shallow water where it’s warmer, but in summer it spends more time in deep water. At least one submersible observed a Greenland shark 7,200 feet below the surface of the ocean, or 2,200 meters. Occasionally a Greenland shark travels more widely, usually in deep water where the water is cold. In 2013 one was caught by researchers in the Gulf of Mexico, which is way far away from the Arctic. It was swimming at over 5,700 feet deep, or 1,750 meters.

The Greenland shark is adapted to the cold and pressure of the deep sea in many ways. Its blood contains three types of hemoglobin, which help it absorb as much oxygen as possible from water that’s poorly oxygenated to start with. Its muscles and other tissues contain high levels of urea and other compounds that increase its buoyancy, so that it doesn’t need to work as hard to stay in one place. But the presence of urea in its muscles means that the Greenland shark not only tastes horrible, it’s toxic. In Iceland Greenland sharks are considered a delicacy, but only after the toxins have been removed from the meat by long treatment. This includes burying it in the ground for weeks, partially fermenting it, and drying it for several months afterwards. Most people don’t bother and any commercial fishing boats that catch Greenland sharks just toss them back overboard.

The Greenland shark has a very slow metabolism and grows extremely slowly too. That’s okay, though, because it lives a very long time. A VERY long time. The biggest Greenland sharks may be as much as 600 years old. Researchers examine the crystals in dead Greenland shark eyeballs to determine when they were hatched.

And speaking of Greenland shark eyeballs…some of you know where this is going. I hope you’re not eating grapes or anything right now. There’s a type of copepod, a crustacean, that acts as a parasite of the Greenland shark and the Pacific sleeper shark, its close relative. The copepod grows to about an inch long, or 28 mm, and attaches itself to the shark’s cornea, which is part of the eyeball. This impairs the shark’s vision but it doesn’t seem to care and it doesn’t seem to have any trouble finding food.

Okay let’s stop talking about that. Our third and final weird fish for this episode is a type of catfish that’s sometimes kept in aquariums. It’s called the upside-down catfish.

There are actually a number of closely-related catfish known as upside-down catfish, but the one we’ll talk about today is Synodontis batensoda. It lives in parts of Africa in marshy areas and slow-moving water. It grows to a little over a foot and a half long, or 50 cm, and eats plankton, algae, mollusks, insects and larvae, and crustaceans.

The catfish used to be well-known in Egypt, and there’s even an Egyptian tomb carving depicting a catfish swimming upside down, dating to the Middle Kingdom around 4,000 years ago. The upside-down catfish was often depicted in jewelry, too, including hair ornaments so beautifully made that the species of catfish can be determined. Young women in Egypt traditionally wore fish ornaments to decorate their braids. There’s a story about one young woman who was helping row a king across a lake when her fish pendant fell into the water. She stopped rowing, naturally, which messed up the other rowers. The king wanted to know why the boat had stopped, and when the woman explained, he offered to give her a new fish pendant. But no, she said, she wanted that one, the one that was now at the bottom of the lake. But the king had a magician who said no problem, and caused the water to fold back like a blanket, exposing the lake’s bottom so the pendant could be retrieved. I didn’t make that story up, either. It’s from the Westcar Papyrus that dates to around the 17th century BCE.

So why does the upside-down catfish swim upside down? Like other catfish, its mouth is angled downward so it can find food in the mud at the bottom of the water. So when it wants to grab an insect on the water’s surface, or eat algae off the bottom of a submerged leaf, it can only do so by turning upside down.

So that’s it for this week’s episode. I don’t know what else to say because I’m just sitting here trying to imagine how I’d manage if someone told me I had to swim upside down. But then, I can barely swim right side up. Good job, upside-down catfish!