This week let’s go back back back in time to more than 300 million years ago, when amphibian-like animals lived in enormous swamps. Don’t be fooled by the word amphibian: many Temnospondyls were really big!

And Sclerocephalus, five feet long and full of teeth. This one has a couple of larvae nearby: 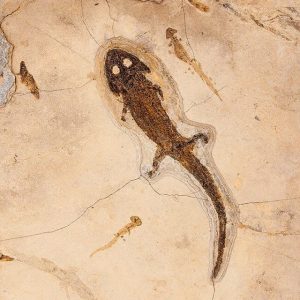 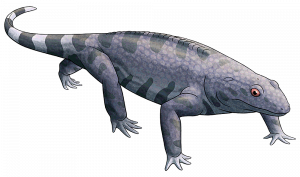 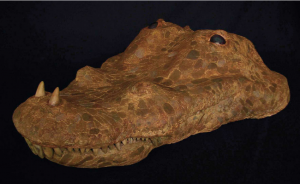 Mastodonsaurus had nose teeth too and it was way bigger than Nigerpeton, but somehow it just looks goofy instead of cool: 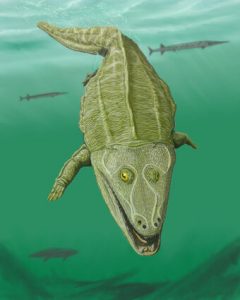 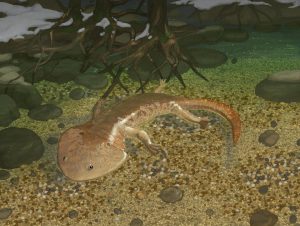 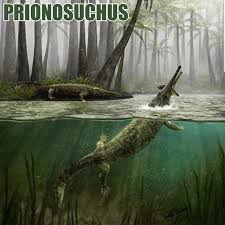 This week we’re going back into the past, way before the dinosaurs, to look at an order of animals that resembled modern amphibians but weren’t precisely amphibians, or reptiles, or fish. Let’s look at the Temnospondyls.

During the early Carboniferous period, which lasted from about 360 to 300 million years ago, the ocean levels were high, the climate across much of the world was humid and tropical, and the continents were in the process of smushing together to form a huge landmass called Pangea. Much of the land was flooded with warm, shallow water that created enormous swampy areas full of plants and newly evolved trees. These swampy areas, full of decomposing leaves, eventually became coal and peat beds. As the Carboniferous period continued, the climate turned milder and the sea levels dropped, but while the huge swamps remained, many life forms evolved to take advantage of the various habitats and ecological niches they provided.

The armored fish of the Devonian went extinct, replaced by more modern-looking fish, including sharks and the first freshwater fish. The first conifer trees appeared, land snails, dragonflies and other insects, and the first animals that could survive on land for part of the time. This included the Temnospondyls, a numerous and successful order of animals whose fossils have been found worldwide and appear in the fossil record for more than 200 million years. But most people have never heard of them.

Temnospondyls are grouped in the class Amphibia alongside Lissamphibia, which is the order all living amphibians and their ancestors belong to. But researchers aren’t sure if Temnospondyls gave rise to lissamphibians or if they all died out.

The first Temnospondyl fossils were discovered in the early 19th century and early paleontologists immediately started debating what exactly these strange animals were. It was originally classified as a reptile, but as more fossils came to light, it became clear that these weren’t reptiles. Finally it was classified as a subclass of amphibian called Labyrinthodontia, where it remains today, at least for now.

Temnospondyls do share many traits with modern amphibians. We know that at least some species had a larval form that was completely aquatic, with fossil evidence of gill arches. Some retained external gills into adulthood the way some salamanders do. But they still had a lot in common with their fish ancestors.

Most Temnospondyls had large heads that were broad and flattened in shape, often with a skull that was roughly triangular. The earliest species had relatively small, weak legs and probably spent most of their time in the water, but it wasn’t long before species with stronger legs developed that probably lived mostly on land.

When you think about amphibian relatives, you probably think these animals were small, maybe the size of a bullfrog. But while some Temnospondyls were small, many grew much larger. Some had smooth skin but many had scales, including some species with scales that grew into armor-like plates. Let’s look at some individual species of Temnospondyl and get an idea of how varied they were.

Let’s start with a group of temnospondyls with one of the most confusing names ever, Dvinosauria. That may not sound too confusing, but it’s spelled just like dinosauria but with a V after the D. It lived in the late Permian around 260 million years ago, and its fossils have been found in parts of Russia. It was named not to mess with people who keep seeing dvinosaur and thinking dinosaur, but after the Northern Dvina River.

Dvinosaurs were either semi-aquatic or fully aquatic, depending on the species. The genus Dvinosaurus was pretty typical for aquatic Temnospondyls. It had external gills and was fully aquatic, with small legs but a powerful tail for swimming. It grew over three feet long, or around a meter, and probably looked like a big salamander with a big triangular head. It probably ate fish and other small animals. Like many Temnospondyls, it had extra teeth growing from the roof of its mouth to help it hold onto fish. Some paleontologists think it lurked at the bottom of rivers and streams until it saw a fish or other animal approach, at which point it shot upward and grabbed it.

A typical land Temnospondyl was Sclerocephalus, which lived around 300 million years ago in what is now Germany. We have a lot of Sclerocephalus fossils, which means it was probably a successful animal. It was also big, around five feet long, or 1.5 meters.

Because we have so many Sclerocephalus fossils, we know a lot more about it than we do other Temnospondyls. Its larval form was aquatic and had a long tail to help it swim. As a juvenile it probably had external gills but as it matured, it spent more and more time on land, using its lungs to breathe. Its tail was shorter as an adult because it didn’t need to swim as often. But it did spend time in the water and retained the lateral line system still found in fish and some amphibians, a sensory organ that detects water movements. It also had a pineal eye that a few animals retain today, notably the reptile Tuatara that we talked about way back in episode three. This third eye was at the top of the skull and was probably only sensitive to light rather than being useful for seeing. As in modern animals that still have a pineal eye, it probably helped regulate behaviors according to the length of days.

We even know exactly what Sclerocephalus ate, because we have fossilized stomach contents in a few cases. It ate fish and amphibians and sometimes smaller Sclerocephaluses, and was probably an opportunistic predator. Like other Temnospondyls it had teeth on its palate, three pairs in its case that grew from the roof of its mouth.

A less typical temnospondyl was the genus Fayella, which lived in what is now Oklahoma in the United States and lived around 270 million years ago, in the early Permian. It grew to about four feet long, or 1.15 meters, and had unusually long legs for a Temnospondyl. It also had a smaller head in proportion to its body compared to most Temnospondyls, and was more lightly built. As a result, it looked more like a reptile or an early synapsid, which as you may remember from episode 119 were proto-mammals that looked like weird reptiles. Researchers think Fayella could run much faster than other Temnospondyls could, which didn’t so much help it catch prey as evade hunting synapsids.

Nigerpeton looked more like your average Temnospondyl, mostly. It lived in what is now the African country of Niger, around 250 million years ago. It was only discovered in the early 2000s and we still don’t have very many fossils so we don’t know exactly how big it was. But its skull was two feet long, or 60 cm, so it was definitely a big animal. It probably looked a lot like a crocodile in many ways, including a long, heavy snout with lots of teeth. Lots of teeth. LOTS of teeth. As with other Temnospondyls, it ate fish and other small, wriggly animals, and to help it catch those fish it had ordinary teeth and extra teeth that grew from the top of the mouth and the lower jaw. Basically it just had a mouthful of teeth. This is true for many Temnospondyls, but Nigerpeton took that one step too far. Two of its extra teeth are referred to as tusks, because they grew upward from the lower jaw, pierced through the roof of the mouth, and emerged from the top of the nose about where you’d expect nostrils to be in a modern animal. Instead of nostrils, NOSE TEETH. Actually, the nostrils were behind the nose teeth. We don’t know enough about Nigerpeton to know what it used these tusks for, but it sure looked cool.

Nigerpeton wasn’t the only Temnospondyl with tusks that emerged from the top of the nose when its mouth was closed. Others had it too, including one of the first Temnospondyls discovered, Mastodonsaurus. Mastodonsaurus was a successful genus of Temnospondyls that lived from about 247 million years ago to 201 million years ago in what is now Europe. Despite its name, Mastodonsaurus was neither a mastodon nor a dinosaur. It was big, though—one species grew up to 20 feet long, or 6 meters. Like other Temnospondyls it had a big head and a somewhat short tail. It also had legs that were small and weak, which suggests it was mostly if not completely aquatic, and it ate fish and other small animals.

The most recently living Temnospondyl, which went extinct around 120 million years ago, lived in what is now Australia. Koolasuchus lived in fast-moving streams and filled the same ecological niche as crocodiles, which eventually replaced it after it went extinct. But it didn’t look anything like a crocodile. It had the typical big head of a Temnospondyl, in this case broad and rounded with a blunt nose, but with what are called tabular horns that projected from the rear of the skull, which gave its head a triangular appearance. Plus, it probably grew up to 16 feet long, or 5 meters. But its body was relatively slender compared to the chonky head, which made it look kind of like a really really big tadpole.

We’ll finish with the largest species of Temnospondyl known, Prionosuchus. It lived between 299 and 272 million years ago in what is now Brazil, and while it didn’t look much like a modern crocodile, it filled the same ecological niche. It had relatively small legs and a big head like most Temnospondyls, but its snout was slender and elongated like a ghavial’s. It was an aquatic animal and was probably an ambush predator that mostly ate fish.

While we don’t know exactly how big Prionosuchus could grow since we don’t have any complete specimens, the largest skull found measured 5.2 feet long, or 1.6 meters. That’s just the skull. Researchers estimate the animal was 30 feet long, or 9 meters, when it was alive.

But although Prionosuchus was amphibious like other temnospondyls, it retained a lot of features from its fish ancestors. Basically, it looked something like the biggest salamander you could imagine, but with jaws and teeth like a ghavial’s, but inside it was more fish than amphibian. It’s no wonder paleontologists have been trying to figure Temnospondyls out for almost two centuries.