This week we’re going to learn about animals that can regenerate parts of their body. What animals can do it, how does it work, and can humans figure out how to make it work for us too?

Thanks to Maxwell of the awesome Relic: The Lost Treasure podcast for suggesting this week’s topic!

The planarian, not exciting to look at but you can get a lot of them easily: 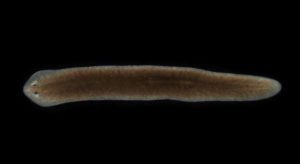 A starfish leg growing a new starfish, or possibly a slightly gross magic wand. Ping! You’ve been turned into a magical starfish: 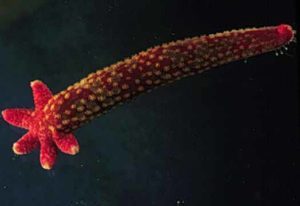 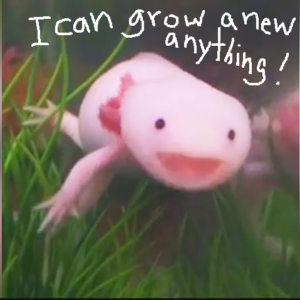 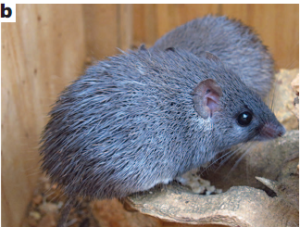 A hydra. Not really very adorable except possibly to other hydras but kind of pretty: 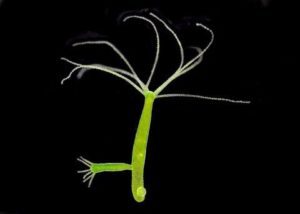 This week’s episode was going to be about lungfish, but I had to postpone it because I ran across some conflicting information about a mystery lungfish, which required me to order a book that probably won’t arrive for a week or two. So when I tweeted about needing a new topic quick, Maxwell of the Relic: The Lost Treasure podcast suggested animals that can regenerate parts of their bodies.

We’ve touched on regenerative abilities before in one or two episodes. Some lizards can drop their tail if threatened, which then regrows later—but a lizard can only do that once. The fish-scaled gecko from episode 20 can lose its scales and regenerate them repeatedly. But other animals can regenerate not just bits and pieces, but entire organs and even their brains. The sea lamprey can even regenerate spinal cord cells. You better believe researchers are trying to figure out how regeneration works and if it can be adapted for human application.

A lot of worms can regenerate lost pieces, including earthworms. Whenever I’m gardening and accidentally cut an earthworm in half with the shovel, I reassure myself that the worm will regenerate the end I cut off. Some species can even grow back from both cut pieces, effectively turning one earthworm into two, depending on where it is severed, although that’s rare. Some species of worm can only regrow the tail, but some can regrow the head. And some, of course, can’t regrow anything. Leeches are a type of worm but they can’t regenerate at all.

Starfish are well-known to regenerate lost or injured legs, and may even drop a leg to escape from predators the way some lizards drop their tails. Some species of starfish can regrow an entire starfish from a single limb. That’s oddly creepy. I don’t know why I find it so creepy. I don’t find the planarians creepy. It’s like if I was run over by a motorboat that chopped my arms and legs off, and instead of dying I not only regrew my arms and legs, my severed arms and legs each grew a new me. I don’t think I’d like that. Although I’m not going to get in the water so I doubt I’ll be run over by a motorboat, and also if I was, sharks would probably eat me before we could see if any parts regrew.

Many starfish relations, such as sea urchins and sea cucumbers, can also regenerate body parts. When the sea cucumber is threatened, it can and will eject its internal organs. They’re sticky and full of toxins, which deters predators, and the sea cucumber just regenerates them.

Most crustaceans, such as crabs and krill, can regenerate legs. So can spiders, which may drop legs to escape from predators. That’s called autotomy, by the way, when an animal detaches a body part to escape from a predator. Spiders molt their exoskeletons every so often as they grow, and lost limbs grow back after molting. Sometimes it takes a few molts for the leg to be the same size as the other legs. Spiders can also regenerate other lost or damaged parts, including mouthparts and spinnerets.

Salamanders and newts can regenerate limbs, tail, some organs, jaws, even parts of their eyes. Frogs and other amphibians can’t. Likewise, some fish can regenerate injured tissue, such as the zebrafish which can regrow fins and eye retinas, and some species of sharks that can regenerate skin tissue, while others can’t. The axolotl, which is an adorable rare salamander found in Mexico, can regrow just about any part of its body, including its spinal cord and up to half of its brain.

So what about mammals? Do any mammals have regenerative capabilities? As a matter of fact, yes. The African spiny mouse is the big regenerator among mammals. It’s actually more closely related to gerbils, and it has stiff guard hairs all over its body that stick out and make it look fuzzy but which act as spines to help ward off predators. But if a predator attacks anyway, three species of the spiny mouse can autotomically drop off part of its skin, which later grows back. Some species of spiny mouse are kept as pets, even though they don’t do very well in captivity. The pet species don’t have regeneration abilities, incidentally. However, they do have delicate tails that are easily injured, which they then lose, and the tail does not grow back.

Those three species of African spiny mouse can also regenerate ear tissue. If a spiny mouse’s ear is damaged, even if it has a hole as big as four mm across, it can regenerate the ear as good as new rather than heal it with scar tissue. A number of mammals can regenerate small injuries to ear cartilage under the right circumstances, including cats. Rabbits can also regrow damaged ear tissue, and have some other regenerative abilities too.

It’s all well and good to point out that a whole lot of animals can regenerate lost or damaged body parts. But how does it work? And more to the point, why can’t humans do it?

Technically, humans and other animals are regenerating certain cells all the time, especially skin cells and blood cells. Small cuts and scrapes heal up without scarring and we don’t think about it at all. Fingertips will grow back after injury and the liver can regenerate. The endometrium, which is the lining of the uterus, is partially reabsorbed into the body and partially expelled from the body every month during menstruation, then regrows. Toenails and fingernails regrow after injury. We just don’t think about all these things because they seem normal to us, whereas we can’t regrow a whole finger if it’s been chopped off, for instance.

I won’t go too deeply into how regeneration works, mostly because it’s complicated and I don’t want to screw it up too badly. There are also different types of regenerative abilities with different processes. Basically, though, as an example, when a salamander loses a leg, the cells surrounding the wound dedifferentiate, basically turning from regular skin cells or what have you into stem cells that can grow into anything the body needs. These cells form what’s called a blastema, which is just the fancy name for a bundle of dedifferentiated cells. Then the blastemal cells start differentiating again, this time into the cells needed to regrow the leg, just as stem cells grew legs when the salamander was developing in its egg.

It sounds pretty simple, put like that. I mean, that’s how we all develop in the first place, from a fertilized egg into a person who can make podcasts and eat cupcakes. The main problem is figuring out how to get human cells to dedifferentiate into a blastema. Because it’s not just injuries that could be helped if scientists figure this out, it’s all sorts of problems. People who have lost their sight due to retinal diseases could regrow new retinas. People born with birth defects could have the nonstandard parts regrown so that they work the way they’re supposed to.

Researchers are working hard to figure all this out. Stem cell research is a big part of regenerative research. Unfortunately, at some point the rumor started that all stem cells come from babies, specifically embryonic stem cells. When a human egg is fertilized, after a couple of days a blastocyst is formed from the cells, which is similar to a blastema but made of cells that have never differentiated into anything else. They’re brand new cells with the capacity to make a brand new human. Naturally, people are squiffy about taking cells that might make a baby and using them for something else. But amniotic fluid, the fluid that surrounds the baby as it’s growing in its mother, also contains stem cells, and they can be harvested without hurting the baby or the mother. You can also get stem cells from the umbilical cord right after a baby is born, and the umbilical cord is just cut off and thrown away anyway so you might as well give it a little extra use. But most stem cells used in research and treatment these days come from bone marrow, lipid cells in fat tissue, and blood, all of which can be extracted without harming the person. They’re not as powerful as embryonic and amniotic stem cells, but they have the benefit of being from the patient’s own body, so no immunosuppression is required to make sure the body accepts them in stem cell treatment.

That was a lot of confusing medical information, so let’s talk about one more animal that can regenerate, the hydra. We’ve talked about the hydra before in the jellyfish episode, which for a long time was our most popular episode. It’s now our second-most downloaded episode, with our first episode inexplicably in the top spot. The hydra is a freshwater animal related to jellies that can regenerate so completely it’s essentially immortal.

The hydra is related to the so-called immortal jellyfish we talked about in episode 19. It can regenerate just about any injury, and like the planarian it can regenerate into more than one copy of itself if it’s cut up into tiny pieces. It’s only a few millimeters long but its tiny body is full of stem cells, and as long as stem cells are present in the body part that was cut off, an entirely new hydra can grow from it. Because of its amazing regenerative abilities, some admittedly controversial studies suggest the hydra doesn’t age. That’s a neat trick, if you can manage it.