Thanks to Elaine, Molly, and Oliver for suggesting the aye-aye! I guess it’s an idea whose time has finally come. 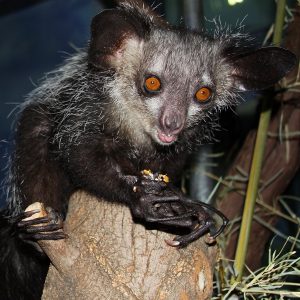 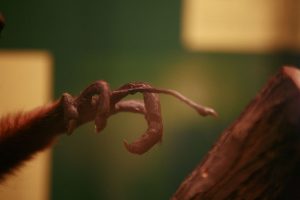 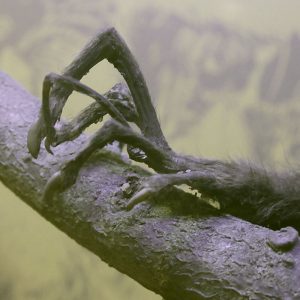 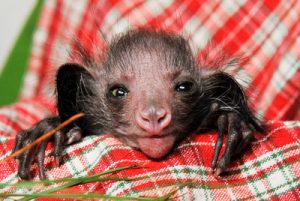 The aye-aye is a primate, specifically a type of lemur, but it doesn’t look like other lemurs. It kind of looks like a weird possum at first glance. Its shaggy fur is brown or yellowish but the hairs are tipped with white, which gives it a frosty appearance. Its face is white or pale gray. Its eyes are large, very round, and orange or yellow, and it has really big ears sort of like a bat’s ears. It grows up to three feet long, or 90 cm, including its really long tail.

To picture what an aye-aye looks like, imagine a little monkey with brownish fur tipped with white, with a tail longer than its body that’s thickly furred like a squirrel’s tail. Its head looks like a squirrel or possum, but with big orangey staring eyes and big bat ears that are sort of stuck out to the sides of its head instead of on top. Its hind feet look like monkey feet with an opposing digit to help it grab onto branches, because it lives in trees. But its hands look like SPIDERS. The fingers of its hands are extremely long and thin like spider legs. That’s what it looks like.

The aye aye’s fingers are long for an interesting reason, and if you don’t already know, I bet you would never be able to guess. Go on, guess. Just shout it out. I won’t hear it but everyone around you will hear you shout, “THE AYE-AYE’S FINGERS LOOK LIKE SPIDER LEGS BECAUSE IT WANTS TO SCARE PREDATORS INTO THINKING IT’S TWO SPIDERS WITH A MONKEY FRIEND.” You would be wrong, sorry, but that’s a good guess.

No, the aye aye uses its fingers to find grubs and other insects hidden in rotting wood or under bark, just like a woodpecker. Here’s how that works, and you’re not going to believe it, but it’s true. The aye aye is a primate, which means it has five fingers just like monkeys and apes and humans, but again, they’re extremely long and thin. The middle finger is even thinner than the others. It looks like a jointed twig. If it really was a spider, other spiders would ask what happened to that leg because it’s so much thinner than the other legs.

The aye aye uses the thin finger to tap-tap-tap on tree branches and trunks at night, and it listens with its huge ears to the echoes of its tapping. That’s echolocation, just like bats and a few other animals use to navigate, but the aye aye uses it to listen for hollow places in the tree where insects are hiding. It can also hear the tiny movements of insects. Its ears are just that sensitive.

When the aye aye locates an insect, it chews a hole into the wood and then uses its long fingers to fish the insects out. It has claws at the end of its fingers that help it catch the insects, although the claws are actually just claw-like fingernails. Primates don’t have claws, we have nails, and that includes the aye-aye. It doesn’t just eat insects, though. It eats fruit, seeds, various kinds of fungus, honey, flowers, and flower nectar. It actually eats more plant material than insects. It may also eat frogs, since some frogs in Madagascar lay their eggs in small holes in trees that are filled with rainwater, but it’s also possible that the aye-aye doesn’t care about frogs or frog eggs or tadpoles. Frogs definitely use the little holes the aye-aye chews as perfect little nurseries for their eggs.

The aye-aye is native to the forests of Madagascar and mostly lives along the east coast. It spends the day sleeping in trees, in a nest it makes out of twigs and dead leaves. Since it may travel more than a mile at night while it forages, it doesn’t always sleep in the same nest. It can make a new one in less than an hour, and then it crawls inside and wraps its long tail around it and falls asleep, cozy and warm.

The aye-aye hardly ever comes down to the ground. It’s mostly solitary except during mating season, although sometimes a few aye ayes will forage together. When aye-ayes do forage together, it’s usually a male and female, or one female and more than one male, or just two or more males. Female aye-ayes are more aggressive than males and they don’t want anything to do with other females.

The aye aye has so many non-primate characteristics that I hardly know where to start. For one thing, it’s nocturnal. Very few primates are nocturnal. It echolocates to find its food, which is completely weird. Also, its incisors grow continuously like a rodent’s. Incisors are those squarish front teeth. Since it uses its incisors to chew holes in wood, they need to keep growing or they’d get worn down to nothing eventually. The aye-aye’s incisors are very similar to a squirrel’s, and in fact is skull and jaw are also very similar to those of a squirrel. You know what that means. Yes, convergent evolution! It’s everywhere! Its skull and teeth look so much like a big squirrel’s that when scientists first examined the aye-aye back in the 18th and early 19th centuries, they classified it as a rodent. It wasn’t until 1931 that it was recognized as a primate, and even today some researchers think it’s not as closely related to primates as is currently thought. Genetic studies do indicate that it’s most closely related to lemurs, though. The aye-aye also has fewer teeth than lemurs and other primates, only 18 in all.

If you shine a light at an aye-aye at night, its eyes will reflect some of the light just like a cat. This is due to a specialized layer in the eye called the tapetum lucidum, which reflects light toward the retina so the animal can see better in the dark. Very few primates have a tapetum lucidum because most primates are diurnal, or active during the day, instead of nocturnal like the aye-aye.

Most nocturnal animals don’t see colors very well or at all. Naturally, they don’t need to since colors are hard or impossible to see in low light. But when researchers studied aye-aye genetics to learn more about how color vision developed in primates, including humans, they were in for a big surprise. The aye aye is completely nocturnal, but it still has the gene to see colors related to green and blue. Researchers have no idea why this is the case, although naturally they have some theories.

One theory is that the aye-aye uses its color vision to find flowers, especially blue flowers. Another theory is that it can see ultraviolet, which allows it to see urine marks left by other aye-ayes, since urine glows in ultraviolet light. The most ultraviolet light is available at dusk, which is when an aye-aye first ventures out to see what’s going on in its territory.

But let’s go back to the aye-aye’s fingers again. I just can’t get over its fingers. Not only is the skeletal middle finger just plain weird-looking, it’s weird compared to all other animal fingers. That one middle finger has what’s called a ball and socket joint, which is just not a joint found in fingers. You may not be familiar with the term, but you know what a ball-and-socket joint is because you have some in your own body. Your leg bones fit into your hip bone with ball-and-socket joints and your upper arm bones fit into your shoulders the same way. This allows you to move your arms and legs all around, whereas your fingers mostly just bend down, and a little bit up and sideways. But the aye-aye’s thin middle finger is incredibly flexible because of its ball-and-socket joint. All its other fingers have ordinary finger joints.

But wait, there’s more about the aye-aye’s fingers. In 2019, results of a study of the aye-aye’s unusual hands were published, and I just want to point out that the lead author of that paper is quoted as saying, “When you watch [an aye-aye] move, it looks like a strange lemur walking on spiders.” I’m not the only one who thinks their hands look like spiders!

Anyway, the study intended to learn more about the tendons in an aye-aye’s hands. But the researchers found a little structure on the wrist that no one had ever noticed before. It’s a small pseudo-thumb, or false thumb, which acts as an extra digit and helps the aye-aye climb through trees.

The pseudo-thumb isn’t just a little nubbin that helps it balance. No, it’s basically a real digit. It has bone and cartilage inside, muscles that allow it to move just like a regular thumb, and it even has a little thumbprint. It’s also strong. Researchers think that the aye-aye’s other fingers are so specialized that they’re not much help in climbing, so it developed an extra thumb.

Strange and specialized as the aye-aye is, it’s not the only animal we know of that had long, thin fingers that it used to tap on trees to find insects. 55 million years ago an animal called Labidolemur kayi lived in Europe and North America and shared many characteristics with the aye-aye. It was a little smaller than the aye-aye but had the same rodent-like teeth and two long thin fingers. Labidolemur kayi shared an ancestor with both rodents and primates, although it wasn’t a direct ancestor of the aye-aye. The aye-aye developed its rodent-like teeth and long thin fingers independently. Say it with me again: convergent evolution!

The aye aye is not only the only member of its own genus, it’s the only member of its own family. There used to be another species called the giant aye-aye that was at least twice the size of the living aye-aye, but it went extinct an estimated 1,000 years ago. Yes, just one thousand years ago, that’s all. We don’t know much about the giant aye-aye because all we have are some subfossil remains.

The aye-aye is endangered due to habitat loss and persecution by locals, who think it’s bad luck due to its weird appearance. It was actually thought to be extinct in 1933, but in 1957 researchers stumbled across one and probably breathed a sigh of relief that we hadn’t lost the aye-aye after all. In 1966 nine aye-ayes were taken to a small forested island off the eastern coast of Madagascar. The island is a nature reserve, and the aye ayes settled right in and are doing well there. At least now, if deforestation continues on the mainland of Madagascar, the aye-aye will be safe from extinction. Since then aye-ayes have also been introduced to another island and several nature reserves and national parks. It’s also kept in some zoos, and the first aye-aye was born in captivity in 1992.

The female aye-aye has one baby every few years, and she takes care of it by herself. Baby aye-ayes have green eyes and floppy ears.