Thanks to Oceana, Leo, and Alexandra for suggesting the coatimundi this week!

The coatimundi has a long tail and a long nose: 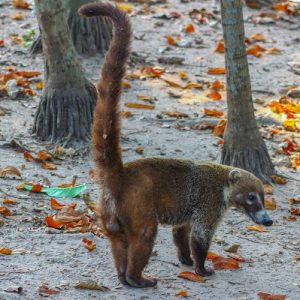 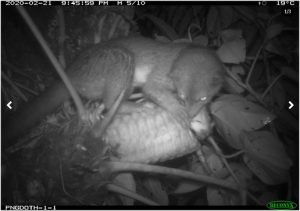 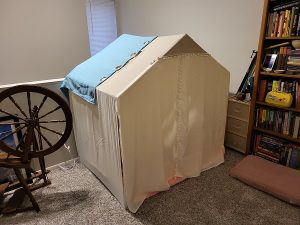 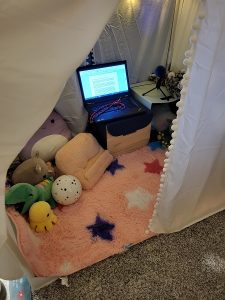 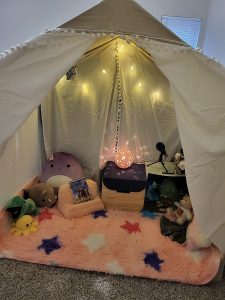 This week we’re going to talk about an animal suggested by several people. Thanks to Oceana, Leo, and Alexandra for suggesting the coatimundi, also called the coati! We’re also going to learn about a related animal mystery that was the subject of a Patreon episode earlier this year, because it ties in so well.

The coatimundi looks superficially like a type of monkey, or maybe a lemur, but it’s not a primate at all. It belongs to the family Procyonidae, which includes raccoons, kinkajous, and a few others. Procyonids are native to the Americas, and some scientists think they may be very distantly related to canids. Since a lot of Procyonids have bushy ringed tails, at one point the red panda was classified as a relation, but it’s since been reclassified into a family all its own that doesn’t appear to be related.

The coati lives in much of South America, Central America, and southern North America, including Mexico and parts of the American southwest. It’s mostly gray-brown or reddish-brown in color, with some white markings around the eyes and muzzle. Males are much bigger than females on average, but in general the coati isn’t that much bigger than a domestic cat. It has a long, thick tail that sort of resembles a cat’s tail except that it’s even longer in relation to its body. Some coatis have rings around the tail but some don’t. It depends on the species and the individual.

The coati uses its long tail to help it balance in trees, since it does a lot of climbing. Its hind feet can rotate so that they’re backwards, which means it can climb down trees headfirst. Procyonids can all do this, but so can some unrelated animals like weasels, due to convergent evolution. The coati also uses its long tail to keep track of its friends when they’re traveling through long grass. It sticks its tail straight up so that it’s visible above the grass. Since female coatis live in social groups of up to 40 individuals, keeping track of friends is important.

The coatimundi doesn’t worry too much that predators might see its tail sticking up and run over for a coati-sized snack. While jaguars, cougars, large eagles, and a few other predators do eat coatis, for the most part other animals leave them alone. The coati has sharp teeth, sharp claws, and it’s strong and fast for its size. It can be ferocious when it needs to, and of course it has its equally ferocious friends to help out. Plus, the coati is intelligent. In a 2013 study, the female coati’s brain was found to have a very large frontal cortex, which is the part of the brain that handles sociability. Male coatis had smaller frontal cortexes, since males spend most of the time by themselves or in small bachelor groups except during mating season. And as we’ve learned when talking about other animals, the more complex an animal’s social structure, the more intelligent it’s likely to be.

The coati’s ears are small and its snout is long and thin and turns slightly upwards, which makes it look a little like a piggy nose. But unlike a pig’s nose, the coati’s is extremely flexible. It uses its nose to root around in leaf litter and dirt to find food. It’s an omnivore that’s happy to eat pretty much anything, from fruit and other plant material, to insects and other invertebrates, including tarantulas, to eggs and small animals. It has a strong sense of smell and clever front paws that help it dig up grubs, termites, and other yummy things. It sleeps with its nose tucked into its belly fur and its long tail wrapped around it.

When a female coati is ready to have babies, called kits, she leaves her group and builds a little nest in a tree. She gives birth there and takes care of her kits alone for about six weeks. At that point the babies can travel well and the whole family rejoins the other females and their offspring. The females take turns babysitting younger kits and watching for danger.

Next, let’s learn about another Procyonid, this one associated with a mystery. But to learn about the mystery we need to start not with an animal, but with a plant. Zamia pseudoparasitica is a type of cycad that only lives in the montane cloud forests in western Panama, in Central America. Even though the cycad is a plant that resembles a palm tree, this particular plant grows in the treetops instead of on the ground.

Because Z. pseudoparasitica is a mouthful, I’m going to call it the cloud cycad.

The cloud cycad has a short trunk without branches, but its leaves are almost 10 feet long, or 3 meters. They look like palm fronds. It grows on other trees, clinging to the branches with its roots, but it doesn’t actually parasitize the tree. That’s why its name is pseudoparasitica: pseudo means false, so it only looks like a parasitic plant growing on a bigger plant.

The cloud cycad starts out by growing upward from a branch as much as 65 feet above the ground, or 20 meters, but as it gets bigger and heavier, it slips down around the branch and hangs upside down. Then its trunk starts bending upward to get more light, so it grows in a sort of U shape.

The term for a plant that lives on other plants without being a parasite is epiphytic. Many epiphytic plants get their nutrients from rain, decomposition of leaves and other organic material near their roots, and other external sources since they don’t have access to soil. They’re often really good at absorbing water quickly too. Spanish moss, some ferns, lichens, and orchids are all good examples, but only one cycad is epiphytic, our cloud cycad.

The cloud cycad produces large yellow or orange seeds in cones, and when the seeds are ripe they have a pungent smell. But here’s the mystery about this strange plant: how do its seeds get dispersed to other trees? The cloud cycad never grows on the ground, and researchers think any seeds that fall to the ground just lie there until something eats them.

An animal has to be helping in some way, possibly by eating the seeds and pooping them out somewhere else. That’s why so many seeds are encased in sweet-tasting tissues. People suspected that fruit bats were the main seed disperser, but no one knew for sure.

In late 2019, a team of young scientists decided to get to the bottom of the mystery. They climbed trees and placed cameras pointing at cloud cycads to see what animals visited them. This was hard work, as you can probably imagine, because those trees are really big; but finally they got the cameras set up. Then, in early 2020, right before Panama went into lockdown due to Covid-19, they had to go back and climb the same trees to retrieve the cameras. Then they had to download the photographs from each and go through them.

Lots of animals were caught on camera, including seven species of mammal. Monkeys, kinkajous, and opossums all gave the seed cones a sniff or two, but only one animal actually collected the seeds. And that animal was the olingo!

The northern olingo is a Procyonid, and is probably the coatimundi’s closest relation. It’s gray-brown in color with a rounded face and short muzzle, small round ears that are low on its head, and claws that help it climb around in trees. It’s mostly nocturnal and mostly eats fruit, and it spends most of its time in the treetops. It’s a slender animal that grows about 20 inches long, or 50 cm, not counting its tail, which is about as long as its body and which it uses for balance. If you look closely, its tail has very faint rings of dark and light fur.

We don’t know a whole lot about the olingo, but we now know it probably eats the seeds of the cloud cycad because it’s been caught on camera grabbing up to four of the seeds at a time and carrying them off.

The scientists still have a lot of work to do to find out more about how the olingo helps disperse the cloud cycad’s seeds, assuming it actually does. The team thinks the olingo might cache seeds like some squirrels do, hiding them in various places around its treetop territory until it’s hungry. If so, in at least some cases, just like with squirrels, some of the seeds are forgotten and germinate to grow new plants.