Thanks to Miranda and Henry for this week’s frog suggestions! 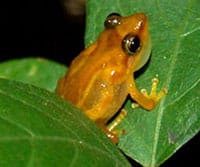 The golden coquí in happier times: 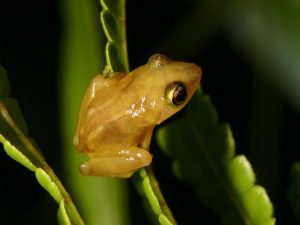 Glass frog from above and below: 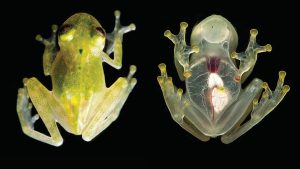 A female granulosa glass frog named Millie (in one of the few successful breeding programs of these frogs), looking demure: 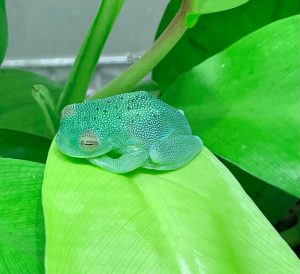 This week we have suggestions from Henry and Miranda, so we’re going to learn about some weird but cute frogs!

First, Miranda listened to episode 270 about the tapir frog and commented about a little frog native to Puerto Rico that sounds very similar. It’s call the coquí frog and it has an adorable beep! It sounds like this:

You can definitely hear why the coquí frog is called that. It sounds like it’s saying “coquí.”

The coquí is a type of tree frog although most species prefer to live on or near the ground. Instead of webbed toes, their toes have discs that act sort of like suction cups that help them stick to leaves. Different species of coquí frogs are different colors, including brown, green, gray, and yellow. Their tummies are usually white or yellow. Most species are quite small, although a few species grow as big as 3 inches long, or about 8 cm.

There are at least 17 species of coquí frog known in Puerto Rico, with more species found in other parts of the Caribbean and in Central and South America. New species are discovered from time to time, including the tiniest species, the Puerto Rican wetland frog. It was only discovered in 2005 and described in 2007. It’s about 15 mm long from nose to butt, or more properly snout to vent, and while males are bright yellow, females are browner. It lays its eggs on the leaves of a plant called the bulltongue arrowhead, and it only lays one to five eggs at a time. Instead of hatching into tadpoles, the eggs hatch into miniature frogs which are ready to hop out and eat lots of ticks, because that’s mainly what this species of coquí eats. And that’s about all we know about this particular species except that it only lives in one small area of Puerto Rico and is critically endangered.

Another species of coquí is the golden coquí, which is almost as small as the Puerto Rican wetland frog. It’s yellow or golden in color, or sometimes a more olive green. Instead of laying eggs that hatch into tadpoles that develop into frogs, the golden coquí skips most of these steps and just gives birth to fully developed teeny baby frogs, three to six of them at a time.

Most species of coquí lay their eggs on leaves instead of in water. The eggs still need to stay moist, though, so in many species the male will bring water to the eggs. He does this by just dunking himself in water, then returning to the leaf where the eggs are and plunking himself down on the eggs. He will also guard the eggs from potential predators. The eggs of all coquí species hatch into frogs instead of tadpoles.

A few species of coquí have been introduced to other parts of the world, either by accident or on purpose, and have become invasive species. This is especially true in Hawaii, where the coquí has become incredibly common and as a result is causing some native frogs to decline in numbers, along with other animals. But in Puerto Rico, where the coquí belongs, people are naturally proud of their loud little frogs. The indigenous people of Puerto Rico, the Taíno, incorporated the frog into their legends, and there’s even 700-year-old cave art on nearby Mona Island that includes paintings of coquí frogs.

The coquí frog mostly eats small invertebrates, including lots of cockroaches and other beetles, so they’re good to have around. Unfortunately, as is the case with so many frog species around the world, their numbers are in decline due to habitat loss, climate change, pollution, introduced predators, and a deadly fungus that we talked about in episode 250. Studies have shown that some populations of the coquí show a natural resistance to the fungus, so if we can just protect their habitats, the frogs will be okay.

Next, Henry wanted to learn more about the glass frog, which lives in Central and South America. We’ve talked about it very briefly in episode 148 and a couple of old Patreon episodes, but we’ve never really gone in-depth about it. Let’s do that now, because this is a really weird and interesting frog!

The glass frog lives in forests of Central and South America, mostly in treetops. They’re small frogs, no longer than about three inches, or 7.5 cm, from snout to vent. Most species are bright green, and in many species, the belly skin is almost completely transparent. You can see right through to their insides: guts, blood vessels, even bones. One newly discovered species from the Amazon also has a translucent chest so you can see its heart. In some species, even the organs are translucent. Some species even have green bones.

The blue-green color of the bones comes from high levels of biliverdin [bill-uh-ver-din] in the blood, which has evolved at least 40 times in 11 different frog families, with more species that have blue-green blood and bones discovered all the time.

In most animals, high levels of biliverdin are a result of liver disease, since it’s a toxin, but in these frogs, the biliverdin is retained in the blood instead of filtered out by the kidneys. Researchers think the biliverdin serves two purposes. Because it makes the frog green all the way through, it helps camouflage the frog among the leaves where it lives, even in infrared light. Researchers recently discovered that at least two species of glass frog reflect infrared light, which may also help keep them concealed from predators that can see in infrared. The high levels of biliverdin may also make the frog taste bad. Some researchers also think it may help protect the frog from parasites.

This doesn’t appear to be related to their see-through tummies, though. No one’s sure why glass frogs are see-through from underneath. Most species have green backs, which helps them blend in to the leaves they live on. Since the glass frog’s legs are usually partially transparent along with its belly, one study has determined that it’s actually the legs that help with camouflage. When the frog sits on a leaf with its legs folded up on either side, the way frogs often sit, the color of the leaf is partially visible through the legs. This helps make the frog look less frog-shaped since its edges sort of blend in with the leaf.

Most of the time glass frogs live high in the treetops, but during breeding season they come down closer to the ground. The female lays her eggs on leaves hanging over running water, which the male fertilizes. In some species, males guard the eggs until they hatch. When the eggs hatch, the tadpoles drop into the water.

Not all glass frogs have translucent undersides, though. Most are ordinary-looking frogs that may be green or occasionally brown or orangey in color, sometimes with little spots. There are also probably a whole lot more of these frogs than scientists know about, since they live in such hard-to-study areas. Several new species have been discovered in just the last few years, including one rediscovery of a species called Laura’s glass frog.

Until a few years ago, the only specimen of Laura’s glass frog was a male collected in 1955 in the foothills of the Andes Mountains in Ecuador. Then a team of scientists studying frogs in the Colonso-Chalupas Biological Reserve, also in Ecuador, found two frogs that weren’t familiar to them. One was male and the other a young female, both living near small creeks where lots of other frog species were common. They were green with tiny yellow spots surrounded by black rings, and were only a few centimeters long, or less than an inch. After several years of study, the team determined that the frogs were Laura’s glass frogs, and they published their findings almost exactly one year ago, in December 2021.

Hopefully, in 2023 scientists will discover and rediscover even more frog species, and we’ll be able to learn more about them so they and their habitats can be protected.