Thanks to Pranav for this week’s suggestion, Titanoboa, the biggest snake that ever lived!

Parts of this episode come from an old Patreon episode about super-gigantic snakes, which is unlocked and you can listen to it here.

A modern anaconda vertebra next to a Titanoboa vertebra. Guess which one is which: 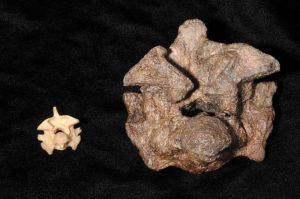 Carlos Jaramillo, one of the scientists who found Titanoboa and Acherontisuchus (taken from a Smithsonian Channel video): 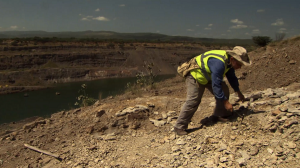 This has been a really busy week for me and I wasn’t able to finish researching the episode I had planned. Instead, we’ll have a short episode on a topic Pranav suggested ages ago, TITANOBOA! In September 2017 I released a Patreon episode about giant snakes, including Titanoboa, but this episode is all new. Ha ha, I thought it would take me less time to research it than finishing the research for what will be next week’s episode, ha ha I was wrong. Anyway, I’m going to unlock the giant snakes Patreon episode so anyone can listen. There’s a link in the show notes if you want to click through and listen on your browser.

Oh, a big congratulations to the winner of my book giveaway, Arthina! Thanks to everyone who entered.

In 1994, a geologist named Henry Garcia found an unusual-looking fossil in northeastern Colombia in South America. Specifically, it was an area that had been strip-mined for coal. Fifty-eight million years ago the region was a hot, swampy, tropical forest along the edge of a shallow sea. The Andes Mountains hadn’t yet formed. The environment was probably most similar to the Everglades and the Mississippi River delta in North America, but the climate was much warmer than it is now. These days what was once swamp is a field of rock uncovered by coal mining, which is not good for the environment but is unbelievably good for palaeontology.

Garcia thought he’d found a piece of fossilized tree. The coal company in charge of the mine displayed it in their office along with other fossils. And there it sat until 2003, when palaeontologists arranged an expedition to the mine to look for fossil plants. A researcher named Scott Wing was invited to join the team, and while he was there he poked around among the fossils displayed by the mining company. The second he saw the so-called petrified branch he knew it wasn’t a plant. He sent photos to a colleague who said it looked like the jawbone of a land animal, probably something new to science.

In 2007, the fossil was sent for study, labeled as a crocodile bone. But the palaeontologists who examined the fossil in person immediately realized it wasn’t from a crocodile. It was a snake vertebra—but so enormous that they couldn’t believe their eyes. They immediately arranged an expedition to search for more of them, and they found them! Comparisons to living anacondas and boas, the snake’s closest living relatives, helped researchers estimate the snake’s size. They named it Titanoboa cerrejonensis and described it in an article published in 2009 in Nature.

In 2012, a partial Titanoboa skull was found. Snake skulls are fragile and don’t fossilize nearly as often as the more robust vertebrae and ribs. It turned out that Titanoboa had lots and lots of teeth, more teeth than modern boids have.

Palaeontologists have found fossilized remains from around 30 individual snakes, including young ones. The adult size is estimated to be 42 feet, or 13 meters. The largest living snakes are anacondas, which may grow up to 29 feet, or 8.8 meters, but which are usually less than half that length. Reticulated pythons grow up to about 26 feet, or almost 8 meters, and possibly longer, but are also usually less than half that.

Titanoboa might have grown up to 50 feet long, or 15 meters, and could weigh more than 2,500 pounds. That’s one and a quarter tons, or more than 1100 kg. The thickest part of its body would have been waist-high compared to an average human male. Of course, these are all estimations since we don’t have a complete skeleton or a living specimen to examine, and most estimates these days put the maximum length at around 42 feet, or 13 meters. Still humongous. Females were probably larger than males, as is the case with most snakes.

Once the skull was found containing all those little teeth, researchers determined that Titanoboa probably ate a lot of fish. That’s unusual for constrictors, but it makes sense to think that a snake that large, living in a hot, tropical area, would spend most of its time in the water.

Even though snakes are cold-blooded, which means their internal temperature fluctuates with the temperature of their environment, a snake that size would retain a lot of heat and even generate heat from metabolic processes. Metabolic processes are related to digestion, chemical reactions that break down food into nutrients that can be used by the body. This releases heat, and in an animal with a bulky body that heat is retained more than in an animal with a slender body. Titanoboa was so big that some researchers think it would have overheated from its own metabolic processes if it didn’t stay cool somehow. Therefore, it might have lived in deep water where it could stay cool. Modern anacondas spend most of its time in the water, although usually in the shallows where it can hide in wait for prey.

Titanoboa undoubtedly ate a type of lungfish that grew nearly ten feet long, or 3 meters, but it probably also ate anything else it could catch, including crocodilians. A gigantic crocodilian found in the same area as Titanoboa, Acherontisuchus, grew up to 21 feet long, or almost 6.5 meters. It lived in the water too and probably mostly ate fish, but it didn’t so much compete with Titanoboa as avoid it as much as possible. After all, a full-grown Titanoboa was more than twice the size of a full-grown Acherontisuchus and could have swallowed it whole after suffocating it.

Several gigantic freshwater turtles also lived alongside Titanoboa. One had a shell that measured 5 feet 8 inches long, or 1.72 meters. Another grew five feet long, or 1.5 meters, but had a shell that was almost perfectly round. Researchers think its shape kept it safe from Titanoboa, since it would have been too big for Titanoboa to swallow. Snakes have bones and jaws that can dislocate to allow them to swallow large prey whole, and stretchy skin, but they have limits. Another turtle had a shell that was described as being as thick as a dictionary. Since other crocodilians have since been found in the area too, the thick shell was probably a defense against crocodilian jaws and teeth. Basically, this was a dangerous place to live no matter how big you were, unless, of course, you were a gigantic snake.

Titanoboa and the other animals of the swampy rainforest lived only about ten million years after the extinction event that killed off the non-avian dinosaurs. Obviously they’d been evolving to fill ecological niches left empty by the dinosaurs. Little did they know, though, that continental drift would lead to a cooling climate that would drive many reptiles to extinction and give rise to the age of mammals!