At last, it’s the episode about the platypus, a monotreme! Only two kinds of monotremes remain: the platypus and the echidna. Monotremes are mammals that lay eggs! Not even making that up. 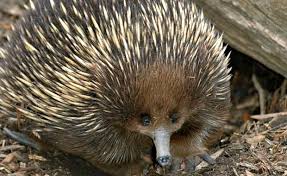 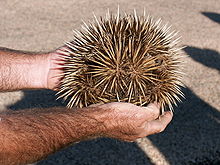 A platypus and another platypus: 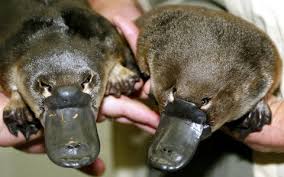 This week we’re finally, finally going to look at the platypus and its relations, called monotremes. I’ve been promising a platypus episode for months and now, it is time.

There is so much weird about the platypus, it’s hard to know where to start. So let’s pull back for a second and look at the bigger picture.

Hopefully most of my listeners are familiar with what traits make an animal a mammal instead of a bird or a fish or what have you. At some point in elementary school, you either had to memorize a list of mammalian traits or you will have to memorize one. The list will be something like this: mammals are warm-blooded, grow hair, and feed their babies with milk. Boom, that’s a mammal. There are more differences than that, and some minor exceptions in the growing hair category, but those are the big differences. But even a little tiny baby who doesn’t know anything knows the difference between a bird and, say, a cat or dog. Birds have feathers, mammals never do. Birds lay eggs, mammals never do.

But wait. That’s wrong. Not the feather thing, but the egg-laying. Some mammals lay eggs. Specifically, the monotremes.

There are three main types of mammals. The biggest is the placental mammal group, which includes humans, dogs, cats, mice, bats, horses, whales, giraffes, and so on. A female placental mammal grows her babies inside her body in the uterus, each baby wrapped in a fluid-filled sac called a placenta. During birth, the placenta tears open and the baby is born first, followed by the placenta, which is frequently called the afterbirth. Placental mammals are pretty well developed when they’re born, with considerable variation. Baby deer and horses, for instance, can stand and run within a few hours of birth, while kittens and puppies don’t even have their eyes open yet. But they’re all mostly done cooking, so to speak.

The second type is the marsupial mammal group, which includes possums, kangaroos, koalas, wombats, sugar gliders, and so on. A female marsupial has two uteruses, and while her babies initially grow inside her, they’re born very early. A baby marsupial, called a joey, is just a tiny little pink squidge about the size of a bean that’s not anywhere near done growing, but it’s not completely helpless. It has relatively well developed forelegs so it can crawl up its mother’s fur and find a teat. Some species of marsupial have a pouch around the teats, like possums and kangaroos, but other species don’t. Either way, once the baby finds a teat, it clamps on and stays there for weeks or months while it continues to grow.

The third and rarest type of mammal is the monotreme group, and monotremes lay eggs. But their eggs aren’t like bird eggs. They’re more like reptile eggs, with a soft, leathery shell. The female monotreme keeps her eggs inside her body until it’s almost time for them to hatch. The babies are small squidge beans like marsupial newborns, and I’m delighted to report that they’re called puggles. Echidnas have pouches and after a mother echidna lays her single egg, she tucks it in the pouch. The platypus doesn’t have a pouch, so after she lays her one to three eggs, a mother platypus holds them against her belly with her flat tail to keep them warm.

Monotremes show a number of physical traits that are considered primitive. Some of the traits, like the bones that make up their shoulders and the placement of their legs, are shared with reptiles but not found in most modern mammals. Other traits are shared with birds. The word monotreme means “one opening,” and that opening, called a cloaca, is used for reproductive and excretory systems instead of those systems using separate openings.

It wasn’t until 1824 that scientists figured out that monotreme moms produce milk. They don’t have teats, so the puggles lick the milk up from what are known as milk patches. Before then a lot of scientists argued that monotremes weren’t mammals at all and should either be classified with the reptiles or as their own class, the prototheria.

It’s easy to think, “Oh, that mammal is so primitive, it must not have evolved much since the common ancestor of mammals, birds, and reptiles was alive 315 million years ago,” but of course that’s not the case. It’s just that the monotremes that survived did just fine with the basic structures they evolved a long time ago. There were no evolutionary pressures to develop different shoulder bones or stop laying eggs. Other structures have evolved considerably.

There are only two types of monotremes still living today, the platypus and the echidna, also called the spiny anteater. We only have one species of platypus but four species of echidnas. All monotremes live in Australia and New Guinea these days, but once they were common throughout much of the world. The oldest platypus fossil found is from South America. But around 60 or 70 million years ago, the ancestors of today’s marsupials started to outcompete the monotremes. Researchers think the ancestor of the platypus and echidna survived because it spent a good part of its life in water. Marsupials are not water animals because their joeys will drown.

Let’s talk about the echidna first. The echidna is a land animal, unlike its ancestors, although it swims well and likes water. It looks a lot like a big hedgehog with a long nose. It’s around a foot to 18 inches long, or 30 to 45 cm. Its short fur is brown or black in color with paler spines, and like a hedgehog it will curl up when threatened so that its spines stick out. It has short, powerful legs that it uses to dig burrows and dig up insects, worms, and especially termites, which it slurps up with a sticky tongue. It doesn’t have teeth. It lives in forests and is a solitary animal most of the time.

Now, the platypus. When I was a kid, pretty much all my knowledge of the platypus, and Australia in general, came from the cartoon Dot and the Kangaroo, so I’m upset to report that the scientific name of the platypus has been changed from Ornithorhynchus paradoxis to Ornithorhynchus anatinus. Sometimes people say duck-billed platypus, which isn’t wrong but since there’s only one species of platypus there’s no reason to be that specific, guys. The snout looks like a duck bill but it’s actually very different. It’s soft and rubbery and it’s packed with electroreceptors that allow the platypus to sense the tiny electrical fields generated by muscular contractions in its prey.

When the first platypus skin was brought to Europe in 1798, scientists immediately decided it was a big fakey fake. Obviously some wag had taken a dead beaver and stuck a duck’s bill on it. It wasn’t until 1802 that a scientist was able to dissect a recently killed platypus and realized that not only was it a real animal, not a hoax, but it was really weird. And they didn’t even know until 1884 that it laid eggs.

The platypus is about 20 inches long, or 50 cm, and it has brown fur that’s short and very dense. The platypus spends a lot of time in the water, and its fur traps air close to the skin to help keep the animal warm while not allowing water in. It has a strong flattened tail that acts as a rudder when it swims, along with its hind feet. It actually swims using its big webbed forefeet. It lives in eastern Australia along rivers and streams, and digs a short burrow in the riverbank to sleep in. The female digs a deeper burrow before she has her babies, sometimes over 65 feet long, or 20 meters. At the end she makes a nest out of leaves.

The platypus eats pretty much everything it can catch, from worms and fish to crustaceans and insects. Platypus puggles are born with a few teeth, but lose them as they grow up. Adults don’t have teeth at all, just hardened skin. While it’s underwater, the platypus closes its eyes, nostrils, and ears, and instead navigates and hunts by means of its well-developed electrolocation abilities. The echidna has some electroreceptors but only a fraction of the number the platypus has. Males of both the echidna and the platypus have sharp spurs on their hind legs, but only the platypus can inject venom. Researchers still aren’t sure why.