This week we look at a couple of unusual vultures, the bearded vulture and the Egyptian vulture. Thanks to Maureen J. who recommended this week’s topic! 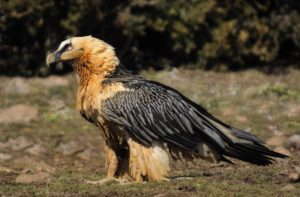 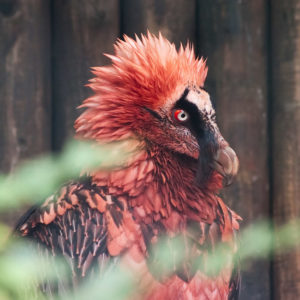 The Egyptian vulture cares about its appearance: 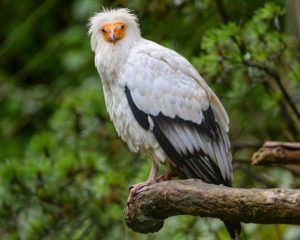 Halloween is over, we’re all pretty sick of candy, and it’s time to move on to something besides monsters. Something that is not associated with Halloween candy in any way, preferably. I ate, like, three bags of gummy spiders by myself this year.

Special thanks to Maureen J. who recently made several topic recommendations. One of her suggestions in particular is taking me down various research rabbit holes, which is a lot of fun but means it’ll be a while before that episode is ready. So in the meantime let’s learn about one of her other suggested topics, vultures.

The bearded vulture lives in the high mountains in parts of Asia, Africa, and southern and eastern Europe, and like other vultures it spends a lot of its time waiting for animals to die or just looking for already-dead animals that it can eat. Unlike most other vultures it often gets impatient and cuts out the waiting part by hunting small animals. It especially likes tortoises. Like golden eagles, the bearded vulture will scoop up a tortoise, carry it way way up high, and drop it. Then it coasts down and eats the smashed tortoise. There are stories that the bearded vulture will also sometimes attack larger prey with its wings, driving the animal over a cliff where it plunges to its death. This is a hardcore bird.

To add to the general air of all bearded vultures secretly being members of Norwegian death metal bands, they also wear corpse makeup. I don’t mean the bird’s ordinary coloring, although it is pretty impressive. Unlike other vultures, it doesn’t have a bald head. Adult birds have white heads with a black band from the eye to the base of the bill that continues in a sort of mustache hanging from either side of the bill. The rest of the bird is dark gray, brown, and cream-colored. No, I mean the bearded vulture actually rubs soil and dust containing ferrous oxide on its body to stain the feathers a rusty red, apparently because it just likes the way it looks. In fact, researchers think the color is a status symbol. A bird that has the time and energy to spend hours preening red dirt into its feathers is a bird that has its life nicely sorted. It also indicates to other bearded vultures that the bird has a big territory and knows it well, since the dust bathing is done in secret.

But let’s face it, the most metal thing about this bird is what it eats. The rotting flesh of dead animals? Pfft, that’s for other scavengers. Most of the time the bearded vulture doesn’t pay any attention to meat. It just wants the bones.

The bearded vulture’s stomach is specialized to digest even large bones in about 24 hours. Bone marrow has a high nutritional content, higher even than muscle tissue, but most animals find it difficult to get to the marrow easily enough to extract the nutrients without more effort than it’s worth. The bearded vulture just picks a bone and either swallows it whole, or, if the bone is too big to swallow, either drops it from a height the same way it does with tortoises or batters it against a rock with its bill until it shatters. But it can swallow bones up to 11 inches long, or 28 cm.

Most vultures regurgitate partially digested food for their babies. The bearded vulture naturally doesn’t do anything that soft. Instead, the parent vultures carry bones back to the nest and the babies swallow them. Young birds don’t leave the nest until they’re three or four months old, and they may continue to rely on their parents for food and help for up to two years.

The bearded vulture is a big bird with long, strong legs. Its wingspan can be over nine feet wide, or 2.8 meters, and the bird may weigh over 17 pounds, or 7.5 kilograms. It can carry bones and tortoises that weigh almost as much as it does.

The bearded vulture is also called the lammergeier, which is German for lamb-hawk. In many ways it’s more like a hawk than a vulture, and in fact falconers have sometimes kept them as tame birds. In the past, unfortunately people thought the bearded vulture killed children and lambs, which is why they’re mostly extinct in Europe—they were all killed.

The bearded vulture is most closely related to the Egyptian vulture, which also happens to be one of the smallest vultures in the world. It’s still a pretty big bird, though, with a wingspan up to about 5 ½ feet, or 170 cm.

The Egyptian vulture is white with black flight feathers, but like the bearded vulture, it will rub its feathers with rust-colored dirt to stain them red. While it has a floof of longer feathers on the back of its head and neck that’s called a hackle, its face is bare of feathers and is also a surprisingly bright shade of yellow or orange. The tip of the hooked beak is black. Both the Egyptian vulture and the bearded vulture have wedge-shaped tails, unlike all other vultures.

The Egyptian vulture doesn’t just live around Egypt. There are three subspecies that live in parts of Africa, Asia, and southwestern Europe. It prefers lower mountains and hills, and some populations migrate while others live in the same area year round. Overall, Egyptian vultures are endangered, and while they’re protected, they do tend to get electrocuted on power lines. This is also a problem for other big birds that live around people, like eagles.

Egyptian vultures eat carrion, not bones, but they also eat insects, fish, rotting fruit, and occasionally kill small mammals and reptiles. They also really like eating the eggs of other birds, but if an egg is too big for the vulture to swallow, it will pick up rocks and throw them at the egg until it breaks. That’s not the only tool use Egyptian vultures show. They like to gather wool to line their nests, and sometimes a vulture will pick up a stick in its bill and collect wool on the stick to more easily transport. That’s pretty sophisticated in the bird world.

Egyptian vultures also eat dung, especially from cows. Researchers think they do this for carotenoid pigments present in the dung, which helps keep the vulture’s face bright yellow or orange. Who knew vultures were so particular about their appearance?

Because the Egyptian vulture is smaller than other vultures, it often has to wait its turn at the carcasses it scavenges. Its slender bill is ideal for reaching smaller pieces of meat that other vultures have overlooked.

One interesting thing about both Egyptian and bearded vultures. They mate for life, but sometimes a pair will accept a second male into their little family. Both males will mate with the female and help raise the babies. This increases the likelihood that the chicks will survive to adulthood.

Life is tough out there in the wild. Babies can use all the help they can get. Even if they are bone-eating death bird babies.