A dung beetle rolling some poop: 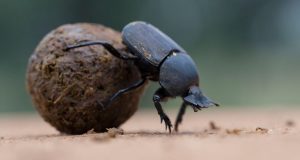 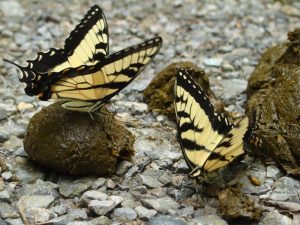 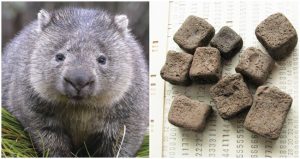 Welcome to a bonus episode made out of a bonus episode. Since this week’s topic is one that some adults may decide they don’t want their young kids listening to, because it goes into detail about hyena reproduction, I decided to unlock a Patreon bonus episode for everyone to listen to. But then I decided to actually release that episode so that listeners can download it normally in the main feed. Those of you who want time to pre-screen the hyena episode to see if it’s appropriate for your kids to listen to can listen to this episode together in the meantime, and those of you who decide the hyena episode isn’t right for your kiddos still have an episode this week as usual. The rest of you get two episodes this week! A special thanks to our Patreon subscribers who support the show and get twice-monthly bonus episodes like this one every single month. This is the only part of the episode that is new; the rest was originally recorded in late 2018. And here it is!

The topic for today’s episode was suggested by my aunt Janice. Janice doesn’t actually listen to the podcast, not even the main feed podcast, but she sends me topic suggestions every so often. Recently, she texted me out of the blue, saying, “I’ve decided that you need to do a podcast devoted to the topic of animal poop. Butterflies eat it, dung beetles roll it, owls leave pellets with tiny animal bones, guano has commercial uses, people make no-bake chocolate and peanut butter cookies and call them cow pie cookies. Goats are gumball machines! Why are so many animals’ poops little Raisinets, but others are long thick Tootsie rolls? Why do so many animals eat poop?” Only, she didn’t say poop. She said another word.

Then I texted her back, telling her how wombat poop is actually little cubes, which blew her mind.

If you listened to the spookiest owl episode recently in the main feed, you may remember about owl pellets. Those do indeed contain bones and other indigestible parts of the owl’s prey, like fur or feathers, but the pellets themselves aren’t the same thing as poops.

Poop, or more properly excrement or feces, is what’s left after food passes through an animal’s digestive system. It contains not just the remains of food that wasn’t fully digested, but secretions from the digestive system, bacteria that live in the digestive system, and of course water. The secretions include a chemical called stercobilin, which helps the body digest fat, and which is what makes your poop brown. Yes, I googled what poop is made up of. I googled it so you wouldn’t have to. I didn’t want to know this stuff. You’re welcome.

Incidentally, the bacteria in your digestive system actually help your digestion and do other good things for your body. People who have to take strong antibiotics or radiation treatment sometimes have trouble with their digestion because the antibiotics or radiation can accidentally kill a lot of the beneficial bacteria in the digestive system. Getting the bacteria back in such cases is simple, usually taking a doctor-prescribed supplement of probiotics, or in less acute cases, just eating a lot of yogurt or certain other foods, like sauerkraut or kimchi, which naturally contain probiotics.

Humans aren’t the only animals with beneficial bacteria in the digestive system. In fact, all animals have them. Some young animals, including horses, will eat their mother’s poop to gain digestive bacteria. Personally, I prefer yogurt.

Oh, and you know how dogs like to get into the cat’s litter tray and eat the cat poop? That’s because cats are obligate carnivores, which means they have to eat meat for almost all of their nutritional needs. That means cat poop is relatively high in protein, which makes it attractive to dogs. I can’t believe I’m talking about this. I hope you’re not snacking while you listen.

I’m sure a lot of us have seen butterflies gathered together on a hiking trail or in a pasture, their wings fluttering in the sunlight, and when you get too close they all fly up together and swirl around, making you smile and think about how wonderful it is that you live in a world with butterflies. Then you look at what the butterflies were gathered on, and it’s an animal poop. Why do they do that?

While butterflies do eat nectar, nectar doesn’t contain all the nutrients they need. It especially doesn’t contain much sodium—you know, salt. So butterflies get sodium and other nutrients from rotting fruit, rotting meat, and animal dung. Also, if a butterfly has ever landed on you, it was probably attracted to your sweat, which contains salt. A lot of times, male butterflies will collect nutrients from poop and other sources and offer them to the female as a gift, hoping she’ll choose him as her mate. I personally would rather have chocolate, but I’m not a butterfly.

Moths also eat poop and other unsavory things, but some moths will cut out the middle-man, so to speak, and actually drink blood from living animals. Vampire moths mostly feed on fruit, piercing the fruit with their mouthparts to suck out the juice. But they’ll also use those same mouthparts to pierce animal skin and drink blood. Most vampire moths live in Asia and parts of southern Europe, but there is a species that lives in North America, although it hasn’t been observed drinking blood. Only male vampire moths eat blood, probably mostly for its salt content, which researchers think they pass along to the female during mating.

The size and shape of an animal’s dung depends on what it eats, how it digests its food, and the size and shape of its colon. Ruminants, like cows, evolved in areas where there was a lot of water, so their feces contain a lot of water. Ungulates, like sheep, goats, and deer, evolved in dryer conditions, so as much water is removed from the feces as possible and the animal excretes dry pellets.

But what about wombat poop? It really is shaped like little cubes, and it excretes 80 to 100 of the cubes every night, since it’s nocturnal. Why is it cube-shaped?

Wombats are territorial, and mark their territory by leaving their poop around their burrows and in areas where other wombats can easily find it. This includes on top of rocks and fallen logs, so having dung that won’t roll off these markers is beneficial for the wombat. The shape is caused by the wombat’s extremely long digestive process. It takes more than two weeks to digest the plants it eats, which allows it to absorb as much water and nutrients as possible. The upper part of its large intestine contains ridges that shape the excrement as it passes through, and the poop is so compacted from its long trip through the digestive system, that it retains its shape until it’s deposited where the wombat wants to leave it.

There are a number of different kinds of dung beetles throughout the world, and not all of them roll dung, but they all eat it. The dung beetles that roll poop are mostly those in the genus Scarabaeus. While poop-eating insects sound disgusting, they’re actually quite beneficial. Some species of dung beetles will bury the poop and lay eggs in it, which fertilizes the soil and helps disperse seeds that may be in the poop, and controls parasites. At least one dung beetle, Scarabaeus satyrus, rolls its dung balls quite a distance, and navigates by the stars and the Milky Way.

Guano is the term for both bat poop and sea bird poop, and it does indeed have commercial uses. It contains high levels of nitrogen, phosphate, and potassium, all of which are good for plants, so it’s used as a fertilizer. It also acts as a natural fungicide for plants. Bat guano was also once mined from caves to make gunpowder, which requires saltpeter, or potassium nitrate, which bat guano is full of.

The Thai Elephant Conservation Center, which you may remember from episode 23, non-human musicians, has developed a way to turn elephant dung into paper, which they then make into handmade notebooks. Since an elephant’s poop is mostly fiber from the plants it eats, and paper is made from plant fibers, it all makes sense. Don’t worry, the fibers are boiled to sterilize them before being used. Other companies have started using animal poop to make artisanal paper, including from pandas and sheep.

Scientists can learn a lot about an animal by studying its poop. Not only can a researcher get an idea of how healthy an animal is, they can learn what an animal is eating, what parasites it may have, and its reproductive cycle, since hormones are excreted with the poop too. Gathering poop doesn’t hurt the animal, and isn’t dangerous for the researcher, since they just pick it up off the ground. In zoos and other places where the animals are fed, researchers can mix additives in an individual animal’s food that help them identify which poop came from that animal. Additives include food dyes and glitter.

I think we’ve touched on everything my aunt Janice mentioned in her suggestion, except for cow pie cookies. I have no idea why people make them and call them that. That’s gross. Once I went to an office birthday party where the cake was made to look like it was made of poop. It was so realistic and disgusting-looking that half the office wouldn’t even try a piece. I don’t remember if I had any. Probably, knowing me. It was chocolate, after all.

Thanks for your support, and thanks for listening!