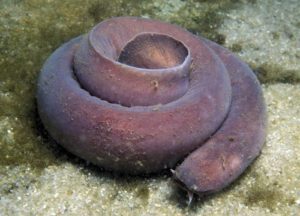 The sea spider is actually quite pretty as long as I don’t have to touch it: 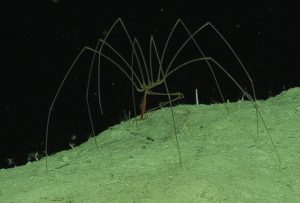 A long long long time ago, and I can’t even remember which episode it was, I mentioned that one day I would do an episode about the hagfish because it’s such a weird animal.

Well, that day is today.

The hagfish isn’t a fish. It looks more like an eel and is sometimes called a slime eel. But it’s not an eel either. In fact, it’s so weird that scientists are still trying to figure out exactly where the hagfish fits in the animal world.

The only living animal that is similar to the hagfish is the lamprey, and current research suggests that they are fairly closely related. We talked about the sea lamprey way back in episode three.

There are a number of hagfish species. The biggest is the goliath hagfish (Eptatretus goliath), which can grow more than four feet long, or 127 cm, but most species are much smaller. As mentioned, it looks sort of like an eel, with a tail that’s flattened like a paddle. It doesn’t have true fins, it doesn’t have a jaw, and it only has a single nostril. It usually breathes by swallowing water, which runs through gill pouches inside the body, but some researchers think it can also absorb oxygen through its skin. It can survive for hours without oxygen.

The hagfish is considered a vertebrate because it has a rudimentary spine, called a notochord. It has eyespots instead of true eyes, which can only detect light, but fossilized ancestors of living hagfish seem to have had more complex eyes. I guess they just didn’t need them.

The hagfish has a lot of blood for its size. Its skin is loose and only attached to the rest of the body along its back and at its slime glands. Since its skin is thick and contains about a third of the body’s blood, the hagfish actually looks kind of like a fluid-filled sock with a tail. If you’ve ever bought an eelskin wallet or other item, it was probably actually made from hagfish skin. Because the hagfish has such low blood pressure, the lowest recorded in any animal, and because its skin is so loose and it only has a few bones, it can squeeze through incredibly small openings. When it does, the blood in its skin is pushed into the rear of its body. This would kill an ordinary animal, but it doesn’t affect the hagfish at all.

There’s so much weirdness about the hagfish that it’s hard to know where to start. Its mouth, for instance. Instead of jaws, its skull has a piece of cartilage that can move forward and backward, with two pairs of comb-shaped teeth attached to the plate. This sounds like it would be an awkward way to bite into food, but it works so well for the hagfish that it hasn’t changed in some 300 million years. It’s more like a toothed tongue or a radula than anything resembling vertebrate jaws. The hagfish also has short tentacles around its mouth.

The hagfish eats anything, but the main part of its diet is probably marine worms that live on the sea floor. It also scavenges carcasses that sink to the bottom of the sea. If you’ve seen that amazing time-lapse video of a blue whale carcass, you’ve seen hagfish. They’re the ones that burrow into the carcass to bite pieces of meat off from the inside, and the ones that will actually tie their body into a knot to help yank food off the carcass. Since the hagfish lives on or near the sea floor, trawlers who drag nets along the sea floor to fish often catch hagfish by accident. Sometimes they catch so many hagfish that by the time they haul the net up, the hagfish have eaten all the fish in the net.

But the hagfish also hunts fish actively, especially the red bandfish that lives off the coast of New Zealand. The red bandfish digs a burrow, and the hagfish will slither into the burrow and drag the fish out to eat it. It may actually suffocate the fish first by smothering its gills with slime.

And that brings us to another weird thing about the hagfish, its slime. The hagfish is famous for its slime. It has something like a hundred slime glands along its sides, and if it feels threatened it will release massive amounts of slime through the glands. It only takes a fraction of a second to release slime. This doesn’t just make it slippery, the slime actually absorbs water and increases in volume, and it’s sticky. If a fish grabs a hagfish, suddenly the hagfish has secreted more than five gallons of slime—that’s 20 liters—which contains thin fibers that help clog the fish’s gills. Meanwhile, the hagfish will tie itself into a knot and push the knot from its head to its tail, which pushes the slime off of its own body and leaves it behind. The hagfish swims away, leaving the predator dealing with copious amounts of slime sticking to its gills. Basically, almost nothing eats the hagfish, not even sharks. But exuding so much slime does cost the hagfish energy. It can take weeks to recover.

One really interesting thing about hagfish slime is those fibers that make up part of its volume. When dried out, the fibers look like silk and are almost as strong and thin as spider silk. They’re also produced from cells that are genetically smaller than those in spiders. Researchers are trying to figure out how to take the DNA for hagfish fiber production and implant it into bacteria that would then produce quantities of silk. Because it’s so strong and lightweight, the silk could then be used to make cloth that could take the place of petroleum-based fibers like nylon. This is so exciting. My guess is it’ll be marketed as eel silk, because that sounds way better than hagfish slime fibers.

We don’t have many hagfish fossils since the hagfish only has a few bones and the rest of its body is rarely preserved in the fossil record. But we do have one really good fossil dated to 100 million years old. Recently, it was imaged using a method called synchrotron scanning, which identifies chemical traces of soft tissues left in the stone. The scan revealed the chemical signature of keratin along the fossil’s sides, and since the slime fibers are made of keratin, researchers think that 100 million years ago the hagfish was already producing slime.

An interesting side note about the synchrotron scanning is that it can be used to detect glue or paint used to make a fossil look more complete than it really is. Fossil forgers beware.

Researchers still don’t know a lot about how hagfish reproduce. We do know that hagfish eggs take a long time to hatch, something like eleven months. The eggs have hooked hair-like structures at the ends and usually stick together in bunches. Hagfish don’t hatch into larvae like lampreys do, but instead hatch into little hagfish. Some hagfish species appear to be hermaphroditic, which means an individual contains both eggs and sperm, but they probably don’t lay eggs until they’re older.

Another weird and fascinating ocean creature is the sea spider. Honestly, despite its name, after the hagfish, the sea spider seems positively normal.

The sea spider isn’t actually a spider, but it’s also not a crab. Like the hagfish, researchers aren’t sure where the sea spider belongs taxonomically. Traditionally it’s been grouped with the group of arthropods known as chelicerata [kelisserate-a], which includes true spiders, scorpions, ticks, and their relatives, and horseshoe crabs. But some researchers think the sea spider is more closely related to our old friend Anomalocaris, a stem arthropod that lived during the Cambrian. Recent genetic studies so far indicate that the traditional chelicerata classification is probably correct.

The sea spider has four pairs of legs, although a few species have five or six pairs of legs instead. Some species have one or two pairs of simple eyes, but other species have no eyes at all. The body is quite small in relation to the legs, which are extremely long, which means the digestive tract is actually partly in the legs, because the body is too small for it. It walks along the bottom of the ocean or may swim by pulsing its long legs like a jellyfish with legs instead of a bell. In species that swim, the legs may be lined with long bristles. Males take care of the eggs until they hatch, so male sea spiders have a pair or two of small legs called ovigers that are used to carry eggs.

Like true spiders, the sea spider doesn’t breathe in a way we think of breathing. It absorbs oxygen through pores in its exoskeleton, and the oxygen is then absorbed into a substance called hemolymph. This is basically invertebrate blood. The hemolymph is moved around its body to the cells that need it—not by its heart, which is relatively weak and only moves hemolymph around the small body, but by the digestive system. Since the digestive system goes all the way down into the legs and already moves digestive fluids around, that makes sense.

Some species have mouthparts, but most eat using a proboscis that it uses to suck hemolymph and other fluids out of its prey. Some species have spines at the tip of the proboscis. It sticks its proboscis into a sponge, worm, jelly, sea anemone, or other invertebrate, injects digestive fluids that liquefy the surrounding tissues, and slurp the fluids up. Sometimes this kills the prey animal, sometimes it doesn’t.

Sea spiders live throughout the world’s oceans and there are well over a thousand known species. Most are small and live in shallow water, but a few live in water up to 23,000 feet deep, or 7,000 meters. The biggest species live in the cold waters around Antarctica, with the very largest individual ever found having a legspan of about 27 inches, or 70 cm. So no, they’re not dangerous to humans at all and while they may look scary because those legs are so long, they’re harmless unless you happen to be a soft-bodied invertebrate that can’t run away.

That doesn’t mean there aren’t actual spiders that live in the ocean. Marine spiders are actual spiders, and they’re intertidal, which means they live in the typically small area between high tide and low tide. During high tide they hide underwater in shells, coral, or plants, and they can breathe because they build air chambers from silk. When the tide goes out, the spiders run onto the sand and hunt small insects and other invertebrates. A new species of marine spider was discovered in Queensland, Australia in 2009 that grows to almost 9 mm in size. That’s almost a centimeter long, or half an inch! Males are smaller, though. It was named Desis bobmarleyi after the Bob Marley song “High Tide or Low Tide.”