This week we’re going to learn about hyenas and the not-related-but-similarly-named hyaenodon! BUT we’ve got a PARENT WARNING WHOOP WHOOP WHOOP *klaxon sounds, red lights flash*

Parents and others who listen with small kiddos, you may want to pre-screen this episode since we go into some details of hyena anatomy that may not be appropriate for younger listeners.

CORRECTION! Thanks to Bal who pointed out that despite what I say on the episode, the hyena is not a canid! Oops, that was a really basic mistake.

Two hyena cubs pester their napping mom until she wakes up and lets them nurse. 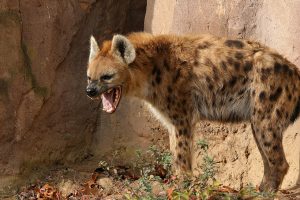 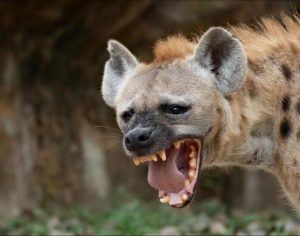 An aardwolf. My friend, your ears are very pink: 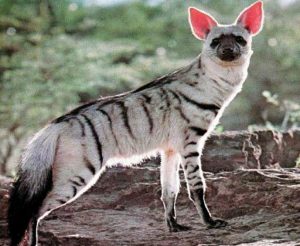 This week we’ve actually got a PARENT WARNING. Parents, grandparents, and other adults who listen with younger children may want to pre-screen this episode. I go into detail about some aspects of hyena anatomy and reproduction that may not be appropriate for your kiddo to listen to. This is only a small part near the end of the episode, though, and I’ll give you a heads-up when we reach it in case you want to skip forward or stop listening at that point. To make up for all this, I’ve also released a Patreon episode about animal poop that will go live at the same time as this episode so you can download it just like any other episode.

So, this episode is about hyenas. Thanks to Pranav for suggesting both hyenas and hyaenadon!

The hyena is [NOT] a canid that lives in Africa. There are only four species in its family, with three genera. Although it’s a canid, the hyena has a lot of traits associated with felids, and some traits associated with viverrids [vy-VERrids]. Viverrids are interesting animals that look sort of like cats and sort of like weasels, and one day I need to do a whole episode about them. Hyenas belong to the suborder Feliformia along with cats, viverrids, mongooses, and some other animals, so even though hyenas are canids, they’re very different from wolves and dogs and foxes.

The hyena has a distinctive body shape, with a back that slopes downward to a rounded rump with shorter hind legs. It also has a relatively short tail. Its forequarters are strong while the hindquarters are less powerful. Its neck is short and thick and its face has a short muzzle. The sloping back and rounded rump actually serve an important purpose. If a predator tries to grab a hyena from behind, not only will it find it hard to get a purchase on the rump, the hyena can use its strong front legs to scramble out of a predator’s grip and run away.

Around 10 million years ago, some hyaenids started to look more doglike than their ancestors, developing into a jackal-like animal that chased its prey through open forests in Europe. And around 6 or 7 million years ago, the first bone-crushing hyaenids developed, which would probably have looked a lot like modern hyenas, but bigger, with a few species as big as a lion.

Hynaeids were doing great throughout Europe and Asia…until other canids made their way to Eurasia from North America. Around 3 or 4 million years ago the first wolf-like canids moved into Europe and almost immediately hyaenids started becoming rarer and rarer in the fossil record as their distant relatives outcompeted them. Almost the only exception was the cave hyena, which lived throughout much of Europe up into Siberia and which primarily killed horses, bison, and woolly rhinoceroses. They also killed wolves, which is probably why the cave hyena didn’t go extinct until around 11,000 years ago when most of its megaherbivore prey also went extinct. We have rock art of cave hyenas made by ancient humans, which means we know it looked a lot like a modern spotted hyena.

Modern hyenas all live in Africa. They have a reputation as a cowardly scavenger, but this isn’t actually the case. While the hyena will scavenge food occasionally, it’s a fierce hunter, especially the spotted hyena. Not only that, it can and will eat every part of the animal, including skin, bones, and hooves.

The spotted hyena is indeed spotted, although the color and pattern of its coat is variable. Generally, though, it’s yellowish or pale brown with darker spots in an irregular pattern. It’s also the only hyena species that doesn’t have a mane on its neck. It’s a large animal too, up to three feet tall at the shoulder, or 91 cm. Females are generally larger than males.

The spotted hyena has a complicated social life. It lives in sometimes large groups, called clans, with up to 80 hyenas. This isn’t the same as a wolf pack. The spotted hyena’s clan structure is actually very similar to that of some monkeys like baboons and macaques, with an individual’s status in the group coming from who its friends and immediate family members are, not how big or strong it is. Clans are also matriarchal, meaning that females are leaders of the group and are considered more socially important than males. In fact, even the lowest ranking spotted hyena female is more important to the clan than the highest-ranking spotted hyena male.

That brings us to the spotted hyena female’s extraordinary differences from other hyenas, and to our content warning. Bing bing bing, content warning for small ears time! We’re going to go into some details of mating and anatomy that may not be appropriate for everyone. If you want to skip forward about two minutes, you can learn about a living hyena relation and an extinct hyena-like animal at the very end of the episode.

The female spotted hyena has what’s called a pseudo-penis. We’ve mentioned this before in one or two other species, but we need to go into detail about this one because it’s so unusual. The pseudo-penis is formed from the female’s clitoris and doesn’t just look like a penis, it acts like one. The female can actually get an erection. She also urinates through the pseudo-penis. The labia are also fused to form a pseudo-scrotum, which means the entrance to the female’s vagina is blocked. This means that it’s actually difficult for the male to mate with the female, because her pseudo-penis is in the same place that a male’s penis is and he has to mate with her through it.

But things get even more complicated when it’s time for the female to give birth. She has no vaginal opening, remember, just a pseudo-penis. Well, she actually has to give birth through the pseudo-penis, and as she does, the clitoris ruptures because—and this is the worst thing of all—spotted hyena cubs are actually quite large. Females usually give birth to one or two cubs in a litter, but about a quarter of the time, one of the cubs will kill the other within a few weeks.

Whew. I think that covers it. If you didn’t wince and cross your legs protectively during that fun little segment, you are made of sterner stuff than me.

All clear, bing bong. It’s safe for little ears to come back and learn about the aardwolf, an animal that lives in eastern and southern Africa. It’s nocturnal and spends its days in a burrow, sometimes digging a burrow itself but most often just moving into burrows abandoned by other animals. It has black stripes on a yellowish coat, a mane down its neck and back, large ears, and a bushy tail. It’s about the size of a big dog, about 20 inches tall at the shoulders, or 50 cm, but it looks like a small, slender hyena. That’s because it is actually considered a hyena, although it’s not very closely related to other hyenas, and it has evolved to eat mostly insects. It especially likes termites and can eat up to a quarter million termites a night. Its teeth are weak and its tongue is long and sticky.

Let’s finish up with a family of animals called Hyaenodontidae, which means “hyena tooth.” Despite the name, Hyaenodonts weren’t related to hyenas or canids at all. They evolved much earlier and died out about the time that little Protictitherium was climbing around in trees eating birds.

The first hyaenodonts evolved in Africa around 60 million years ago and soon spread into Europe and Asia, and eventually into North America. It was a big carnivore with long, slender jaws, a long tail, and big flat feet sort of like a bear’s paws. There were lots of species, including one that lived along the coast and specialized in eating shellfish, and which was adapted to swim sort of like an otter. But the largest Hyaenodont was Hyaenodon gigas, and it was huge even by modern standards. It stood 4.5 feet tall at the shoulder, or 1.4 meters.

Hyaenodon had massive jaw muscles that allowed it to bite right through an animal’s skull to kill it. We know because we have a fossil skull of a small cat-like mammal that has puncture wounds that exactly match up to Hyaenodon’s tooth pattern. Hyaenodon’s rear teeth were sharper than its front teeth, though, and it used them to slice its meat into smaller pieces before swallowing it. But it also crushed and ate a lot of bones, just like modern hyenas do. It was probably an ambush predator, and we have a lot of Hyaenodon fossils found in areas that were once watering holes. So even though Hyaenodon had a small brain compared to modern hyenas and other mammals, it was pretty smart about where to find food.