The Gulf of California, AKA the Sea of Cortez, is home to thousands upon thousands of animals, many of them not found anywhere else in the world. New research expeditions in its deep-sea fissures and trenches have turned up some amazing new animals too. Let’s take a look at a few of them!

Thanks to Hally for this week’s topic suggestion!

The lollipop catshark sounds cuter than it is: 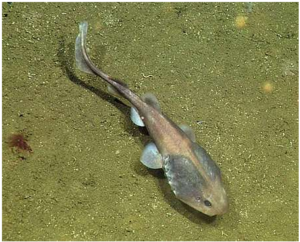 A super creepy grenadier fish. Look at those EYES:

A type of batfish. It uses its stiff fins to walk around on the bottom of the ocean: 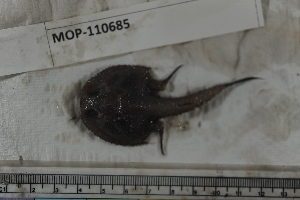 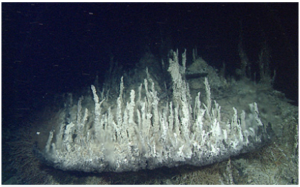 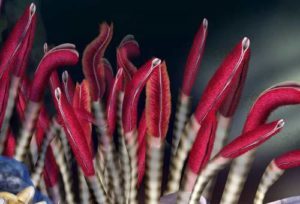 It’s been a while since we did a deep-sea episode. This week let’s find out about some strange fish discovered in the Pacific Ocean off the coast of Mexico. Thanks to Hally for the suggestion!

The Gulf of California, also called the Sea of Cortez, is the stretch of water between mainland Mexico and the Baja peninsula. Researchers estimate it started forming over 5 million years ago when tectonic forces separated the strip of land now called Baja peninsula or Baja California from the mainland. It’s still attached to the mainland at its northern edge, where the Colorado River empties into the gulf. The sea is about 700 miles wide, or over 1100 km.

Because the gulf was formed by tectonic forces and undersea volcanos, parts of it are extremely deep—more than 12,500 feet deep in places, or 3,800 meters. It’s full of islands, nearly 1,000 of them, a few of them quite large and some just tiny, some of them volcanic and some not. And it’s rich in ocean life, with many animals found in the Gulf of California that live nowhere else in the world.

For instance, the lollipop catshark! What a cute name. It probably plays ukulele and its best friend plays the xylophone. They should start a band!

The lollipop catshark is actually not super cute, although it is pretty awesome. It’s a small shark, only about 11 inches long, or 28 cm, and it has pinkish gray skin that’s almost gelatinous in texture, although it also has tiny spiky denticles, especially on its back. It gets the name lollipop from its shape. It has a broad head with large gills, but its body tapers to a slender tail so that it’s sort of shaped like a tadpole. Not really lollipop shaped, frankly. Babies are born live instead of hatching from eggs, with a female giving birth to two babies at a time. It eats crustaceans and fish.

The reason the lollipop catshark has such big gills is that it lives at the bottom of the ocean where there’s not much oxygen. The Gulf of California is especially oxygen-poor in its deepest areas, so when a team of scientists sent a submersible to the deepest parts of the gulf in 2015, they didn’t expect to find that many fish or other animals. But not only were there a lot of lollipop catsharks, there were lots of other animals too.

The submersible found the most fish in a part of the gulf called the Carralvo Trough, which is nearly 3,300 feet deep, or 1,000 meters. A few years before, a submersible had discovered the bodies of dozens of dead squid in the trough, and researchers determined that the squid were all females that had laid eggs and then died and sunk to the bottom. The dead squid are usually eaten by scavengers within 24 hours of dying, including crabs and sea stars, brittle stars, and acorn worms, as well as small bottom-dwelling sharks like the lollipop catshark. So it was good timing that the submersible saw so many of them at once.

Another deep-sea animal found in the Gulf of California is the cusk eel. There are lots of species of cusk eel that live throughout the world’s oceans and even some fresh water, and despite the name, cusk eels are fish, not eels. They’re related to cod, although not closely. They live on the bottom of the ocean, usually in shallow water, where they burrow in the sediment and sand at the bottom.

But the cusk eel found in the Carralvo Trough is called the black brotula, and it’s so different from other cusk eels that it has its own genus. The black brotula grows up to 10 inches long, or about 25 cm, and only lives in the depths of the Gulf of California and in some deep areas along the western coast of Mexico and Chile. Not only can it tolerate low-oxygen water, it prefers it. It’s black or dark gray in color–even its intestines are black. And that’s pretty much all we know about it at this point. Cusk eels are generally not very well studied, and the black brotula is hard to study because it lives so deep in the gulf. Researchers don’t even know how it tolerates water with so little oxygen and what it eats down there. We do know that young black brotulas prefer shallower water.

Another deep-sea fish found in the Gulf of California is the grenadier [grin-a-deer]. Grenadiers are some of the most common deep-sea fish in the world, with lots of different species. Some researchers estimate that they may make up as much as 15% of all fish that live in the deep sea. All grendadiers have large heads with big eyes and mouths, slender bodies that taper to such a thin tail that some people call the fish rattail.

The grenadier has barbels under the chin with chemoreceptors on them, and more chemoreceptors on the mouth and head, so it can sense other fish nearby even if it can’t see them. It’s been found as deep as nearly 23,000 feet under the surface, or 7,000 meters, which is just ridiculous. That’s four and a third miles underwater, or seven km. The Gulf of California isn’t that deep, of course, but there are grenadiers swimming around in the deepest areas, eating anything they can catch.

Some grenadiers are eaten, but mostly they have a soft, unpleasant texture and are low in protein. The biggest grenadier, which is common throughout the deep areas of the Pacific Ocean, is the giant grenadier, which can grow to 6 ½ feet long, or 2 meters. It eats vampire squid and other cephalopods. The grenadier most commonly found in the Gulf of California is the smooth grenadier, which only grows to about a foot long, or 30 cm.

A type of batfish that’s common off the western coasts of North, Central, and South America is also found in the deep sea of the Gulf of California. It’s a small type of anglerfish, only about six inches long, or 15 cm, dark in color, with a broad flattened head tapering to a much thinner long tail. Like other anglerfish, it has strong, stiff fins that it uses to crawl around on the ocean floor, where it hunts small animals like polychaete worms and crustaceans as well as fish.

If you look at the pictures I have in the show notes, or if you’ve been paying attention to the descriptions of all these fish, you’ll notice that even though they’re not related, they all share similar features. Their heads are large and usually broad, while their bodies are relatively small with a slender tail. The large head allows the fish to have unusually large gills and eyes, with a broad mouth so it can gulp down any food it finds. You know what this points to? That’s right, convergent evolution, where the fish all share a similar habitat that has influenced certain aspects of the body shape!

Currently, researchers are exploring volcanic vents in the Gulf of California that are the deepest found in the area. The area contains hydrothermal vents, which can heat the water to over 660 degrees F, or 350 degrees Celcius, and cold seeps, which are only called cold because they’re not super heated.

The vents are surrounded by mineral towers called hydrothermal chimneys that are up to 120 feet high, or 37 meters. These deepest vents and chimneys were only discovered in 2015, with others nearby only discovered in 2012. There are two types of chimneys in the area, dark-colored ones that grow the biggest, which are made up of sulfide minerals, and smaller, more delicate ones made up of light-colored carbonate minerals. The only other carbonate chimneys ever found are in the Atlantic. They’re really pretty.

Between the super heated water, the high levels of sulfides and heavy metals from the vents, and the great depth, the area would kill most animal life. But hydrothermal ecosystems are home to extremophiles that thrive in places that are deadly to other animals. The dark-colored chimneys, often called black smokers since they give off plumes of superheated minerals that look like smoke, are home to giant tube worms that can grow nearly eight feet long, or 2.4 meters, although they’re only a little more than an inch and a half wide, or 4 cm.

Giant tube worms don’t have a digestive tract, just a sort of internal pouch to hold the chemosynthetic bacteria that provide nutrients to the worm. The worm gives the bacteria a safe place to live, and the bacteria convert the carbon dioxide, hydrogen sulfide, and other minerals into nutrients that the worm absorbs.

But how do giant tube worms find new hydrothermal vents? Old vents go cold and new ones open up all the time, and giant tube worms can’t move once they’ve attached themselves to a rock or other solid structure. It turns out that newly hatched giant tube worms are free-swimming larvae, and at first they don’t contain any of the symbiotic bacteria that they need later in life. They acquire the bacteria later, when bacteria in the water find the larva and burrow into its skin. The larva swims deeper into the ocean and finds a hydrothermal vent, if it’s lucky, and attaches itself to a rock or something nearby. It then develops rapidly from a larva into the juvenile stage, where its digestive system reforms into a place for the bacteria to live. Then it grows into an adult tube worm.

The carbonate chimneys have a different kind of tube worm that prefers a different range of minerals.

Giant tube worms were only discovered in 1977. No one back then dreamed that anything could live around hydrothermal vents so the team exploring some vents hadn’t even brought along a biologist, just geologists. I like to think that they freaked out when they saw tube worms and other animals living around the vents.

It just goes to show, like they say in Jurassic Park, life finds a way.