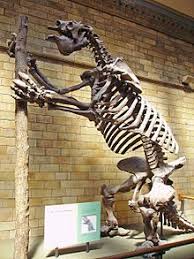 Giant sloth big, yeah yeah yeah, it’s not small, no no no

Glyptodon. Like a giant armadillo that can’t roll up and doesn’t need to. 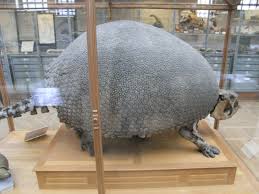 For this week’s episode, let’s learn about some Ice Age megafauna! But first, a quick note about my schedule. I’ll talk more about this in a few weeks, but in August I’m going to be in Helsinki, Finland for WorldCon 75. I don’t have the final schedule yet, but I am going to be on a panel about podcasting. If you’re going to WorldCon too, or if you’ll be in Helsinki the week of the convention or the week after, let me know so we can meet up! I’ll also be in Oslo, Norway for part of the day on August 7. I got a cheap flight to Helsinki because it has an 11-hour layover in Oslo, but to me that’s a bonus. Oslo has birds! Birds I’ve never seen before! So if you’re going to be in Oslo on August 7 and you’d like to meet me for a birding trip and/or lunch, definitely let me know! And don’t worry, I’ll schedule episodes ahead of time so you can continue to learn about strange animals even while I’m gone.

Now, on to the megafauna. Until about five million years ago, South America was a big island continent the way Australia is today. As a result, many of the animals that evolved there at the time don’t look anything like animals in other parts of the world.

The various species of giant ground sloth, such as Megatherium and Eremotherium, were South American mammals that lived from around 30 million years ago until only about 10,000 years ago—but we’ll come back to that in a minute. Those two species were huge—as big as African elephants. It was 20 feet long and stood more than 12 feet high on its hind legs. They liked woodlands and grasslands and ate plants.

Megatherium had huge curved claws on its forefeet just like modern sloths, four claws that were a foot long each, and we know it walked on the sides of its paws as a result because we have some fossilized tracks. A ground sloth could walk on its hind legs, at least for short distances, and when feeding it spent a lot of its time reared up on its hind legs, helped to balance by its thick tail. It could reach branches some 20 feet off the ground that way. It hooked the branches down with its claws to eat the leaves.

Around 5 million years ago, South America became connected to North America by the Central American Isthmus, which is volcanic in origin. Over the millennia, peaking around 3 million years ago, North American animals migrated south, and South American animals migrated north, called the Great American interchange. A lot of South American megafauna went extinct with the increased competition for resources, but nothing bothered the giant ground sloths. One medium-sized species, named Megalonyx by Thomas Jefferson, spread throughout North America as far north as Alaska. It was “only” about 10 feet long and weighed some 800 pounds, with three claws on its forefeet.

The North American sloths died out first, around 11,000 years ago. It didn’t take long for most of the South American sloths to go extinct too, a little over 10,000 years ago. And yes, that was the same time that humans were spreading deeper into the Americas. It’s not a coincidence, although climate change after the last big ice age probably played a part too. Ground sloths had thick skin reinforced with osteoderms, knobs of bone tissue that grow in the skin like armor, so killing one would have been a lot of work for our ancestors, and was undoubtedly dangerous too.

But a whole lot of islands make up the Carribbean, and giant sloths lived on some of those islands. Many had developed in isolation long enough that they’re now considered separate species from the mainland sloths. And many of the island sloths persisted for thousands of years after their gigantic mainland cousins were long dead.

The island sloths were much smaller than Megatherium. Megalocnus only weighed about 200 pounds—a big sloth, but nothing like the five tons that Megatherium could weigh. But Megalocnus survived until some 6,000 years ago in Cuba and maybe much more recently. Another Cuban sloth lived another thousand years after that. A small ground sloth called Neocnus survived on Hispanolia until only about 4,500 years ago.

You may have heard recently about a lot of huge tunnels in Brazil. Until recently, people assumed they were natural caves. It wasn’t until the 2000s that geologists started investigating the tunnels and immediately saw that they weren’t natural at all. They were burrows, many with claw marks on the walls as though just dug, thousands of them scattered across Brazil and a few other parts of South America. Some are tall enough to stand up inside comfortably. One paleoburrow in the Amazon is a network that adds up to around 2,000 feet of tunnels, six feet tall and almost that wide. It was probably used by generations of animals, enlarged and extended as new adults dug their own burrows.

The burrows were probably dug by giant sloths. No one is sure why. Giant sloths had no predators until humans moved into the area. But it’s also possible that some or most of the burrows were dug by the extinct ancestors of armadillos, glyptodon.

The glyptodonts are related to both the giant ground sloths and modern-day armadillos. Glyptodon and its two related species, Panochthus and Doedicurus, lived in the same areas where the giant burrows have been discovered. And modern armadillos are good burrowers. But Glyptodon had even less reason to need burrows than giant ground sloths did. It was an enormous animal, 11 feet long and five feet high, weighing over two tons, with a massive domed carapace like a tortoise shell, made of rows of osteoderms. It also had osteoderms that protected its head like a cap, and rings of bony plates on the end of its thick tail that made it into a club-like weapon. Even its jaws contained osteoderm ridges, which helped grind up the plants it ate, although it also had huge grooved teeth.

In other words, glyptodon was a walking tank. Nothing much ate them until humans showed up. A full-grown glyptodon was a bonanza for humans if they could kill it. Not only did it provide a whole lot of meat, its shell could be used as shelter. Clean it out good first. At least one human burial has been found in a glyptodon shell.

Considering how amazing glyptodonts are, you’d think they’d be more well known and better studied. There’s still a whole lot we don’t know about them, including how many species there actually were and how recently they died out. There aren’t even very many reported sightings of living ones, which tends to happen with just about any extinct animal.

Giant ground sloths, on the other hand, do get reported every so often, and there are hints that giant ground sloths might have lived until much more recently than ten or eleven thousand years ago. Megatherium remains found in caves sometimes seem suspiciously fresh, although so far radiocarbon dating hasn’t given us any surprises. In 1740 the Portuguese historian Lozano mentioned an animal that sounds a little like a ground sloth, which was supposedly called the su by locals.

Some cryptozoologists believe that a legendary South American monster, the mapinguari, may have been inspired by megatherium. The mapinguari is supposed to be nine feet tall and smelly, with feet that face backwards, an extra mouth in its belly, skin that deflects arrows, and sometimes it’s said to have only one eye in the middle of its forehead. It also eats meat. That sounds a little on the far-fetched side to me, and a lot of cryptozoologists group the mapinguari with bigfoot type monsters.

There is another monster story from Patagonia that sounds a lot more sloth-like on the surface. The yemisch is supposed to be a cow-sized animal that sleeps in burrows it digs with its huge claws. It can’t be killed because arrows bounce off its hide. In fact, yemisch is supposed to mean “the one covered in little stones.”

That sounds promising, but the story comes exclusively from a man called Florentino Ameghino, who was convinced that a smaller giant ground sloth named mylodon still lived in Patagonia. The first mention anywhere of the Yemisch comes from Ameghino’s 1898 paper about mylodon, where he said the Tehuelche of Patagonia referred to it as the water tiger. It was semi-aquatic, spending much of its time in the river. It was said to drag horses into the water with its huge claws. Its feet were flat, its ears tiny, it had huge claws and fangs, and its toes were webbed for swimming. It was bigger than a puma but with shorter legs.

This doesn’t sound like a ground sloth, which were not carnivores despite their big claws. In 1900 a French naturalist, Andrew Tournouer, spotted an animal in a stream that looked a lot like Ameghino’s description of the Yemisch. Tournouer said it was definitely not a ground sloth; his guide said it was called a Hymche.

The water tiger Ameghino describes is well known in Patagonian native lore, but not under the name Yemisch. It’s possible Ameghino mangled the word Hymche. Whatever the water tiger is, though, it’s definitely not a giant ground sloth and I’m going to save it for a future episode if I can dig up more about it.

There was an aquatic giant ground sloth once, though, Thalassocnus. It grew to around five or six feet long and lived off the Pacific coast of South America, where it ate seaweed and other marine plants. Fossils document how it adapted to marine life over the generations. The earliest Thalassocnus fossils are of semi-aquatic animals that grazed in shallow water. Fossils from more recent species show increasing adaptations to deeper water, including increased weight of the skeleton to help it stay underwater instead of bobbing up to the surface. It died out around two and a half million years ago, after the Isthmus of Panama formed, probably because the new land mass caused the water temperature to cool and many of the ocean plants in its habitat went extinct.

Whether or not any giant ground sloths are still alive in the remote parts of South America, I think we can all agree that they’re not going to eat anyone. So if you see one, don’t shoot it unless it’s with a camera.