Thanks to Vaughn for suggesting this week’s episode topic about Venus the cat and her unusual coat pattern! 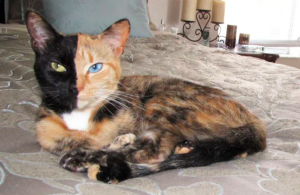 “Half-sider” birds can be spectacular: 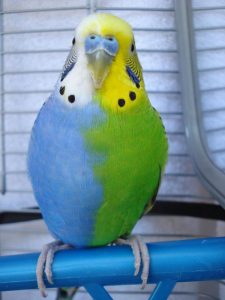 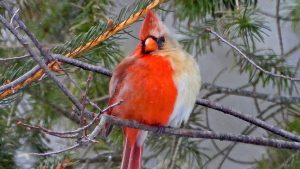 Half-side chimeras are not just restricted to birds: 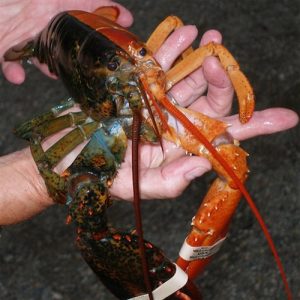 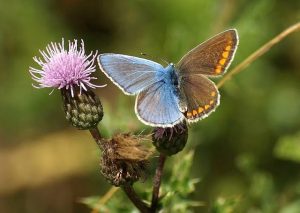 Ranger the “black lion” (photo by Peter Adamson, from this site which you should also read). Note the black patch on his right front leg: 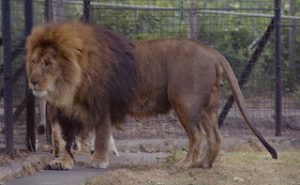 This week I had planned to release our updates episode, but I didn’t have time to finish it. The 2022 updates episode will run in September instead, since we’re doing Invertebrate August again this year!

Way back at least a year ago and possibly more, Vaughn suggested we do an episode about “rare two-tone animals like Venus the cat.” I put the suggestion on my list and totally forgot about it until today, when I saw it and thought, “hmm, who’s Venus the cat?”

If you don’t already know, Venus is a beautiful cat whose coloration is mostly what’s called tortoiseshell, meaning she has a mixture of colors on her body, in her case black and orange. But Venus’s face is completely black on one side with a green eye, but orange tabby on the other side with a blue eye. She also has a white bib and white on her paws.

Venus became famous after the family who adopted her as a stray in 2009 posted pictures of her online. Her coloration is so unusual that everyone wondered what caused it. The answer is that we aren’t exactly sure, but veterinarians and experts in cat genetics do have some pretty good ideas.

There are probably several things going on genetically with Venus that resulted in her interesting coloration. Her different-colored eyes are one result. When an animal has different-colored eyes, called heterochromia iridis, there are a number of possible causes, from an injury to one eye to various genetic conditions. Sometimes it’s not complete, meaning one eye may be partly a different color. It even happens in people sometimes, although it’s rare.

In Venus’s case, researchers think her heterochromia may be due to a gene that produces what’s called piebaldism. A piebald animal has white markings when an ordinary animal of the same species doesn’t have any white markings. Some animals who naturally have a white pattern may have the word pie or pied or just bald hidden in their name, such as the magpie and the bald eagle, because it used to mean just an outfit with different contrasting colors. In the story of the pied piper, the piper had on a suit made of different colors.

The white patches of a piebald animal actually don’t have any pigment, and if a white patch is over an eye, the eye may also lack pigment and appear blue. That’s pretty common in piebald or pinto horses or in some dog breeds with white markings. The piebald gene may also affect one or both eyes even if a white patch doesn’t cover the eye, which some researchers think may be the case in Venus. Her left eye is blue even though the left side of her face is orange tabby.

Venus’s unusual facial fur coloration may be due to a condition called chimerism. Chimerism happens long before an animal is born—in fact, it happens within a few hours after an egg cell is fertilized. I’ll do my best to explain it. A lot of the next section comes from a Patreon episode from 2018, and if you want to listen to the original I’ve unlocked it for anyone to listen to and put a link in the show notes.

If there are two fertilized egg cells, they develop into two separate babies, which are fraternal twins that don’t necessarily look alike. Occasionally, a fertilized egg cell will split and each of the two resulting cells will start to develop separately. In that case, you get identical twins.

But very rarely, you start with two egg cells that should develop into fraternal twins—but for some reason, in those very first hours when each egg cell has only divided a few times, the egg cells fuse together. The cells continue to divide and develop into not two babies, but one that contains the genetic markers for both twins.

This doesn’t just happen in birds. Occasionally someone will come across a butterfly where the pair of wings on one side is colored like a male of that species and the pair of wings on the other side is colored like a female. Occasionally someone will adopt a kitten that’s one color on one side and a totally different color and pattern on the other side.

So I bet now you’re wondering if it happens in humans. Yes, it does! It happens occasionally in everything, including plants. Usually no one knows if a particular animal is a chimera because most of the time it doesn’t show. It’s only when it produces a spectacular coloration difference like in half-siders that anyone takes a second look.

Venus’s facial markings look a lot like those of a half-sider, but the markings on the rest of her body don’t, so she’s probably not a half-sider. That doesn’t mean she isn’t a chimera, since while all half-siders are chimeras, not all chimeras are half-siders. However, she might have a genetic mutation called mosaicism instead.

Mosaicism is similar to chimerism, but instead of being caused by two fertilized egg cells fusing together, it’s caused by a chromosomal mutation in one cell during the embryo’s very early development. The mutation is replicated as that cell divides, and then replicated in the divided cells, and so on, so that when the organism has finished developing into a baby, part of its body contains the mutation while the rest doesn’t. The part of the body with the mutation has a different genetic profile from the rest of the body.

Mosaicism can result in various physical conditions, but for the most part you can’t tell by looking if an organism exhibits mosaicism. But sometimes you can. In 1975 a lion cub was born in Glasgow Zoo in Scotland, and he had a big black patch on his chest and right front leg, with a less dark patch on his left hind leg. Since black lions are rumored to exist but have never been scientifically documented, or even photographed, this was a big deal. When Ranger the lion grew up he was introduced to several different females in hopes that he would sire cubs that also had black patches, or which were even black all over. Unfortunately Ranger seemed to be sterile and none of his mates got pregnant.

Ranger lived to be 22 years old but died before genetic testing became widespread and sophisticated. These days we know a lot more about big cat genetics and researchers are pretty sure Ranger’s black patches resulted from somatic mosaicism, which affected some of his skin cells. Since the right side of Venus’ face is solid black, some researchers think she might have a similar condition.

Whatever the cause or causes of Venus the cat’s coloration, though, one thing is for sure. She’s an absolutely beautiful cat!