The Lightbulb Lizard of Benjamin Shreve 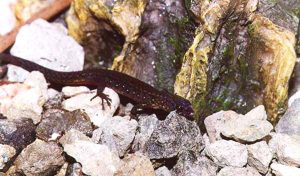 A web-footed gecko in moonlight: 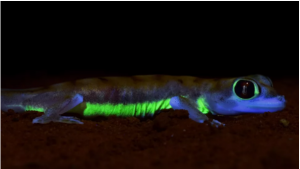 A Jamaican gray anole showing off his dewlap: 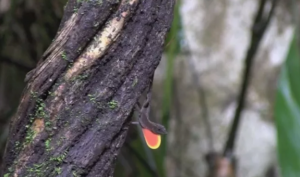 The story of this little lizard starts in 1937, when zoologist Ivan Sanderson was collecting freshwater crabs on a mountaintop in Trinidad. They were probably mountain crabs, also called the manicou crab, which is actually a pretty astonishing animal on its own. It’s a freshwater crab that doesn’t need to migrate to the ocean to release its eggs into the water. Instead, the female carries her eggs in a pouch in her abdomen. The eggs hatch into miniature crabs instead of larvae, and they stay in her pouch until they’re old enough to strike out on their own.

The mountains of Trinidad are made of limestone, which means they’re full of caves, and Sanderson was reportedly catching crabs in an underground pool or stream. He noticed a flash of light in the darkness and naturally went to find what had made it. All he found was a little lizard hiding under a ledge. It looked kind of like a brown skink and was pretty boring, but when the lizard turned its head, Sanderson saw a flash of dotted light down both its sides. When he caught the lizard and examined it while it was sitting in his hand, it flashed its lights again.

Sanderson took the lizard back to his camp, where he and his team observed it in different situations to see if it would light up again. They moved it to warmer areas and colder ones, made loud noises nearby, even tickled it, and they did indeed see it light up a few times. The light came from a row of tiny eyespots along its sides, from its neck to its hips. It had one row of these spots on each side, and each spot looked like a tiny white bead. The greenish-yellow flashes of light seemed to shine through the spots, as Sanderson said, like “the portals on a ship.”

Sanderson sent the lizard to The British Museum in London where another zoologist studied it and discovered that it was actually a known species, but apparently very rare. Only two specimens had ever been caught, one a juvenile and one an adult female. The lizard Sanderson caught was male, and it turns out that only adult males have these little eyespots. Sanderson later caught seven more of the lizards.

Let’s jump forward a bit and get a better idea of what these lizards look like. Shreve’s lightbulb lizard grows around 5 inches long at most, or 13 cm, not counting its long tail. It has short legs, a pointy nose, and broad, flat scales on its back and sides. It’s mostly brown in color. It lives in high elevations in the Caribbean island of Trinidad and Tobago, which is just off the coast of Venezuela in South America. It prefers cool climates, unlike most reptiles, and while it turns out that it’s not actually very rare, it’s also hard to study because it lives in such remote areas, so we don’t know much about it. It may be nocturnal and it may be semi-aquatic. It certainly lives along mountain streams, where it eats insects and other small animals.

Now, we have mentioned Ivan Sanderson a number of times in past episodes, and you may remember me sounding pretty skeptical about some of his cryptozoological claims. But Sanderson was a zoologist with a good reputation as a field scientist, and more importantly, he wasn’t the only one who saw the lizard light up.

The British Museum zoologist, H.W. Parker, who studied the first lizard Sanderson found, was actually the scientist who had originally discovered the lizard a few years before. He was very interested in the little portholes along the male lizard’s sides and studied them carefully. But he couldn’t find anything about them that indicated how they lit up. Each tiny eyespot consisted of a transparent center spot with a ring of black skin around it. The eyespots did not contain glowing bacteria, specialized nerve endings, ducts, reflecting structures, or anything else that he could think of that might cause a flash of light.

Other zoologists examined the so-called lightbulb lizard over the next few decades and none of them saw it emit light either. By 1960 no one believed it was bioluminescent.

I’m taking most of my information from a blog post by Dr Karl Shuker, a zoologist who writes a lot about cryptozoological mysteries. If you want to read his article, there’s a link in the show notes. Shuker was the one who got some modern scientists interested in the lightbulb lizard again, and there’ve been some recent studies. The lizard has been reclassified several times recently and its current name is Oreosaurus shrevei. Oreosaurus is spelled Oreo-saurus and it may be pronounced that way, and while I would like to think that the name comes from the white-appearing center of the eyespot with black pigment around it like an Oreo cookie, the name Oreosaurus is older than the cookie and as far as I can tell it means mountain lizard.

Some experiments conducted in the early 2000s finally figured out just what is going on with the lightbulb lizard. Sanderson was right: he and his colleagues really did see light coming from the eyespots. But it’s reflected light, not light emitted by the lizard itself. The white dots in the middle of the eyespots are reflective at some angles. Not only that, but when the lizard feels threatened, the skin around the white dots becomes even darker, which makes the reflection seem brighter. It’s partly optical illusion, partly just optics.

The big question now is why the lightbulb lizard has these reflective spots at all. The female doesn’t have them. That suggests that the male uses them in some way to attract a mate, but we don’t know.

While I was researching this episode, I kept coming across mentions of other lizards named lightbulb lizards. They’re all related to Shreve’s lightbulb lizard and I suspect the name got popular after Sanderson’s findings, which he published in a book of his nature travels called Caribbean Treasure. As far as I can find, none of the other lightbulb lizards have these reflective eyespots. Many are burrowing reptiles and they all have short legs and look a lot like skinks.

Meanwhile, in glowing lizard news, scientists discovered in 2018 that chameleons glow fluorescent under ultraviolet light. Even their bones are fluorescent. A lizard called the web-footed gecko, which lives in the desert in Namibia, Africa, has translucent markings on its sides and around its eyes. In daylight the markings don’t show, but in moonlight they glow neon green due to special pigment cells called iridophores. Iridophores are found in cephalopods and other marine animals, but they’ve never been seen before in land animals. Male Jamaican gray anoles have a colorful throat decoration called a dewlap that they extend to attract a mate, and the skin is translucent so that when sunlight passes through it, the colors glow brightly.

All these findings are only a few years old, so obviously we’re only just learning about all the different ways that lizards use light to their advantage. I wouldn’t be a bit surprised if a genuinely bioluminescent lizard was discovered eventually. So when you’re outside at night, don’t assume that every little flash of light is a firefly.