Thanks to Nikita for this week’s suggestion that we learn all about the peregrine falcon!

A peregrine falcon in flight: 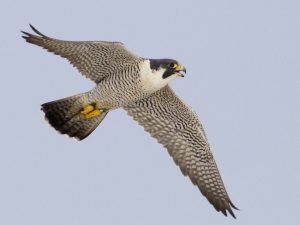 Baby peregrine falcons. Look at those giant peets! [photos by Robin Duska, taken from this site] 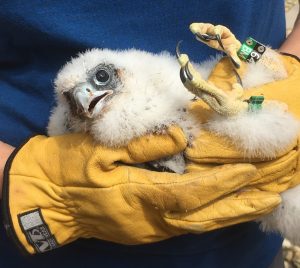 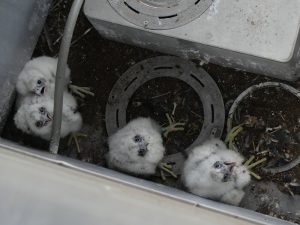 This week we have a suggestion from Nikita, who wants to learn about the peregrine falcon! The peregrine falcon is the fastest animal known, and I thought about trying to talk very fast for this episode, but I decided I make enough mistakes just talking normally.

A quick note before we start. On Saturday, October 1, 2022, I’ll be at the Next Chapter Book Fair and Convention in Dalton, Georgia. If you happen to be in the area, stop by and say hi! I’ll be selling books and I think I’m on a panel too. That’s the last event I have planned for the year and I’m not sure if I’ll be selling books at conventions next year. It’s fun, but it’s also a lot of work. Whatever copies of the Beyond Bigfoot & Nessie book that don’t sell next week, I can offer for sale directly from me. If you want a signed copy of a slightly banged-up paperback that’s been to a lot of conventions, email me and we can work out a price with shipping.

Speaking of conventions, back in June I had a fantastic time at ConCarolinas, and one of the things I did was join the guys from Arcane Carolinas to record an episode of their excellent podcast. Well, they’ve just released that episode and it’s fantastic! I’ll put a link in the show notes in case you don’t already listen to their podcast.

The peregrine falcon lives throughout the world, with as many as 19 subspecies, although experts disagree about a few of those. It’s about the size of a crow, with females being much bigger than males. Different subspecies have different patterns, but in general the peregrine falcon is dark above and pale below with a darker barred pattern. It has bright yellow around its eyes, and the base of its hooked bill and its feet are yellow.

The peregrine mates for life, and reuses the same nesting site every year. Some populations of peregrine migrate long distances, and sometimes the male will stay year-round near the nesting site while the female migrates. Either way, at the beginning of the breeding season, which is usually around the end of winter, the pair performs courtship flights where the male will pass food to the female while they’re both flying. Sometimes the female turns over to fly upside-down to take food from her mate.

The male typically prepares several potential nesting sites, and the female chooses which one she likes best to lay her eggs. The peregrine doesn’t build a nest, though, just kicks at the dirt to make what’s called a scrape. It’s just a shallow depression in the dirt. The female lays 2 to 5 eggs that hatch in about a month into fuzzy white babies with gigantic talons. Both parents help incubate the eggs and both feed the babies after they hatch.

The peregrine especially likes open areas with cliffs for its nest, and as far as it’s concerned, skyscrapers are just a type of cliff. It’s surprisingly common in cities as a result, not to mention that cities are home to another bird, the pigeon, that the peregrine loves to eat. The peregrine mostly eats birds, especially pigeons, gulls, ducks, and various songbirds, but it will also eat bats and sometimes small animals like squirrels and rats. It mostly hunts at dawn and dusk, but it will hunt at night too and sometimes during the day.

Even though the peregrine isn’t very big compared to many birds of prey like eagles, owls, and hawks, it is an astounding hunter. It has strong feet equipped with sharp talons to grab prey, and its hooked beak is notched to help it bite through the spine of a bird it’s caught to kill it quickly.

But the main reason the peregrine is such an effective hunter is how fast it can fly. It’s pretty fast while just cruising around looking for prey, flying about 30 miles per hour, or 48 km/hour. If it spots a bird it wants to eat, it can easily more than double its speed to chase it. But that’s not all.

The peregrine’s signature move is the stoop. This is a high-speed dive from a height, and the falcon hits its prey with feet extended but clenched into a fist. Stoop speeds have been recorded and are as high as 238 miles per hour, or 383 km/hour. This is the speed of a Formula One race car! So getting hit by a stooping falcon would be like being punched by a small feathery car. BOOM! That’s the end for you.

While the peregrine mostly eats medium-sized birds, it’s been documented to kill birds as large as a sandhill crane or a great horned owl by stooping. During the stoop, the peregrine changes its body shape for maximum aerodynamics, and high-resolution photos taken of a falcon flying in a wind tunnel show that certain feathers pop up in rows to guide air over the body.

If you were riding in a race car going that fast, everything around you would look like a blur. That’s because our eyes and our brains can only capture and process images so fast. But the peregrine falcon can see just fine at those speeds, because its eyes and brain have evolved to capture and process images extremely quickly. The only birds studied with similar visual processing are flycatchers, little songbirds that chase insects to eat. Insects are fast so flycatchers are fast, but the peregrine falcon catches and eats flycatchers.

The peregrine’s speed of visual processing has a side effect when birds are kept in captivity. If the lights in their enclosure flicker at all, the birds will get sick. That’s because what may be only a barely perceptible flicker to us is like a constant strobe light for the peregrine!

The peregrine has been kept as a hunting bird for thousands of years. It’s not domesticated, but young birds are relatively easy to tame and it can be trained to return to the falconer after catching its prey. Peregrines used to be captured from the wild by falconers, and if you’ve read the book My Side of the Mountain by Jean Craighead George, this is one of the things the boy in the book does. That book was published in 1959, though, and around this time the peregrine falcon began to decline in numbers worldwide due to DDT use.

We’ve talked about DDT recently, in episode 277 about rewilding Scotland. DDT is a pesticide that was developed in the 1950s and used extensively to kill insects on crops and gardens. But DDT doesn’t just do its job and evaporate. It stays in the environment and ends up in the bodies of animals, including people. It’s especially bad for birds of prey, and it causes their eggshells to become so thin and weak that the eggs break when the mother tries to keep them warm. The peregrine falcon was one bird that was especially badly affected, especially in North America and parts of Europe, where it almost went extinct. It was placed on the endangered species list and protected, but it wasn’t until scientists realized that DDT was the cause, and DDT use was banned in most parts of the world, that the peregrine’s numbers stopped dropping.

Falconers played a big part in helping the peregrine falcon recover from nearly going extinct. Falconers mostly care deeply about their birds and know how to take care of them. While the peregrine was on the endangered species list, falconers stopped taking birds from the wild and instead bred already captive birds. Then, once DDT was banned in most places, falconers helped with the reintroduction of peregrines into the wild. The peregrine was removed from the U.S. endangered species list in 1999 and from the Canadian list in 2017. But conservationists worldwide still monitor the peregrine falcon to make sure it continues to do well in the wild.