Thanks to Pranav for this week’s suggestion, lobsters!

Visit Dr. Oné R. Pagán’s site for links to his podcast and his free book Arrow: The Lucky Planarian! You can also order his other books from your favorite book store. Here’s the direct link to his interview with me! 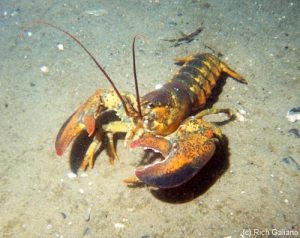 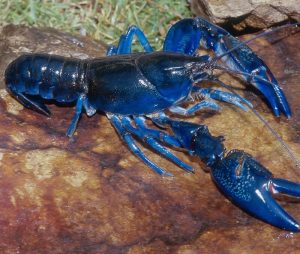 The scampi looks more like a prawn/shrimp than a lobster, but it’s a lobster: 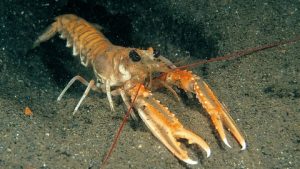 The rosy lobsterette is naturally red because it lives in the deep sea: 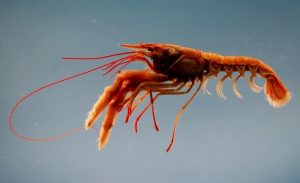 The deep-sea lobster Dinochelus ausubeli was only discovered in 2007 and described in 2010: 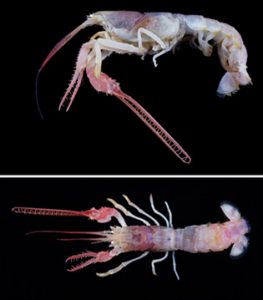 As invertebrate August continues, this week we’re going to talk about lobsters. Thanks to Pranav for the suggestion!

But first, we have a birthday shout-out! A great big happy birthday this week to Jake! I hope your birthday is epic fun!

I’d also like to let you know that Dr. Oné R Pagán interviewed me recently about my book, Beyond Bigfoot & Nessie: Lesser-Known Mystery Animals from Around the World, and you can hear that interview on his podcast, the Baldscientist Podcast. Baldscientist is all one word. I’ll put a link in the show notes. While you’re at it, you should definitely buy his books, including his latest one, Drunk Flies and Stoned Dolphins: A Trip Through the World of Animal Intoxication, which just came out this year and is a lot of fun, as well as being full of interesting science! He also has a free children’s story called Arrow, the Lucky Planarian that you can download and read. It’s completely charming and you’ll learn a lot about planarians, which are also called flatworms, which are invertebrates, so this is all coming together!

This week’s episode isn’t about planarians, though, but about lobsters. I don’t think we’ve ever discussed lobsters on the podcast before, oddly enough, but it’s been on my ideas list for a long time. When Pranav emailed me recently to suggest we do a lobster episode, I realized it was time! Time for lobsters!

The lobster is a crustacean, and while there are plenty of different lobsters in the world, we’re going to focus on the clawed lobsters this time. There are lots of them, all grouped in the family Nephropidae.

The lobster has eight legs that it walks on, and two more legs with pincers. That’s why it’s in the order Decapoda. Deca means ten and poda means feet. Ten feet. Some of which can pinch you if you’re not careful.

The lobster uses its claws to defend itself from potential predators, and uses them to grab and kill small animals. It eats pretty much anything it can find, from fish and squid to sea stars and mollusks, to dead animals and some plant material. But its claws are too big and clumsy to use to eat with, which is why it has much smaller pincers on its next pairs of legs. These pincers are equipped with chemoreceptors that allow the lobster to taste its food before it actually eats it, which is a neat trick.

The lobster uses these small claws to pull its food into smaller pieces and convey it to the mouthparts, which are under its head. Some mouthparts have sensory hairs that can taste food, some have sharp spines that act as teeth to tear food into smaller pieces, and others are small and just flutter to help keep pieces of food from floating away. The stomach is only about an inch away from the mouth, or about 2.5 cm, no matter the size of the lobster. The stomach itself, and the short esophagus leading to the stomach, are lined with chitin spines that act like teeth to grind food up while enzymes break it down to fully digest it. This seems like a really complicated way to eat, but it’s actually not all that different from the way we eat, it’s just that instead of mouthparts and stomach teeth, we do all our grinding up of food in the mouth with just one set of teeth.

Molting takes energy, though, and the bigger a lobster is, the more energy it takes to molt. It’s not like taking off a shirt. The lobster has to wriggle carefully out of its exoskeleton through a split between its tail and abdomen, making sure not to hurt its soft body in the process, and it even molts its stomach teeth, more properly called a gastric mill.

It’s a long, difficult process, during which time the lobster is mostly helpless. Some studies indicate that something like 10% of all lobsters actually die during the molting process. A lobster usually eats its shed exoskeleton in order to extract calcium from it, which helps its new exoskeleton harden faster.

Unlike many animals, lobsters keep growing throughout their lives. Since they can live a long time, that means sometimes people catch really big lobsters. The biggest ever reliably measured was an American lobster caught in 1977 off the coast of Nova Scotia, Canada in North America. It weighed 44 lbs, 6 oz, or 20.14 kg and was 3.5 feet long, or 106 cm. A more ordinary weight of a good-sized lobster is about 2 lbs, or 910 grams.

The lobster can definitely live at least 50 years, and some researchers suggest it can live much longer than that. But it’s really hard to tell the age of a lobster. You can’t go by size since individual lobsters grow at different rates depending on how much food they can find and other factors. A study published in September 2021 reports that a DNA test of genetic modifications that lobsters and other animals accumulate during their lives can determine a lobster’s age with a good degree of accuracy. This is important since it will help conservationists learn more about lobster populations, many of which are under increasing pressure from commercial fishing.

There’s a lot of talk online about how the lobster is actually immortal, and that if nothing kills it, it will just live forever. This rumor got started when scientists reported that lobsters express an enzyme called telomerase that repairs damage to DNA sequences at the ends of chromosomes. Most adult animals lose the ability to express telomerase, but the lobster doesn’t.

Still, the telomerase probably helps the lobster live for such a long time. Now that scientists have a way to determine a lobster’s actual age without harming it, hopefully soon we’ll learn more about how old they really get. We might be surprised, who knows?

Most species of lobster are brown, black, or greenish, which helps them hide on the sea floor. When a lobster is cooked by boiling, chemicals in its exoskeleton react with the hot water and turn it bright red. But sometimes—like, once every 10 million lobsters—a live lobster is found that is red. Researchers aren’t sure what causes this coloration.

Sometimes lobsters can be blue too. It’s still rare but not as rare as red coloration, estimated at about one every two million lobsters. While some species of lobster are naturally dark blue or even dark purple, a blue lobster is a really pretty shade of bright blue. It’s caused by a genetic mutation that results in it producing more of a protein that reacts with the pigments in its body, turning it blue. Since blue lobsters are so striking and attractive, lobster fishers usually either throw blue lobsters back or donate them to local aquariums. People sometimes assume blue lobsters are poisonous even though they’re not, so mostly no one wants to eat them anyway.

Lobsters are closely related to crabs and shrimp, and some clawed lobsters look a lot like their close relatives. This includes the scampi, which is the pinkish and silvery-white coloration of a prawn or shrimp, and only grows about 10 inches long at most, or 25 cm. It lives in parts of the northeastern Atlantic and parts of the Mediterranean Sea, where it digs a burrow in the muddy sea floor and spends most of its time hiding. It eats worms, small fish, jellyfish, and anything else it can catch. There are other species of scampi that live in other parts of the world’s oceans too.

Another lobster that looks even more like a shrimp is the rosy lobsterette, which only grows about 5 inches long, or 13 cm, and which is naturally red. This isn’t a rare coloration but an adaptation to its habitat. Unlike most lobsters, which live in shallow coastal waters, the rosy lobsterette lives in much deeper water where there’s very little light. As we’ve talked about before, the wavelength of light that is red can’t penetrate very far into water, so a red animal in the deep sea is basically invisible. A lot of deep-sea animals can’t even perceive the color red. The rosy lobsterette lives in the Gulf of Mexico, around the Caribbean, and in the western Atlantic Ocean.

There are actually quite a few species of lobster that live in the deep sea, with more being discovered every so often. In 2010 a new species of deep-sea lobster was described, Dinochelus ausubeli, which lives near the Philippines in South Asia. It was discovered during the ten-year Census of Marine Life, which sponsored 540 expeditions by thousands of scientists all over the world. It only grows a few inches long, or about 5 cm, and is mostly transparent with some pinkish coloring. It has one really long, thin, spiny claw with a bulbous base, while the other claw is much smaller.

There are a whole lot of other clawed lobster species, some of them known from only a few specimens. The Cape lobster, for instance, lives off the coast of South Africa in rocky areas, and even though it’s been known to science since the late 18th century, we don’t know much about it. It’s small, only growing about 4 inches long, or 10 cm, and ranges in coloration from greenish to yellowish to brown, even sometimes red, and it looks like a miniature version of the European or American lobsters although it’s not very closely related. In 1992 someone found one, which was such a rare occurrence that it was reported in the news. It was only the 14th specimen ever found at the time, although the publicity it received got other people out looking for the little lobster and more have been found since.

In other words, there are undoubtedly lots more species of lobster than we know about, just waiting to be discovered.